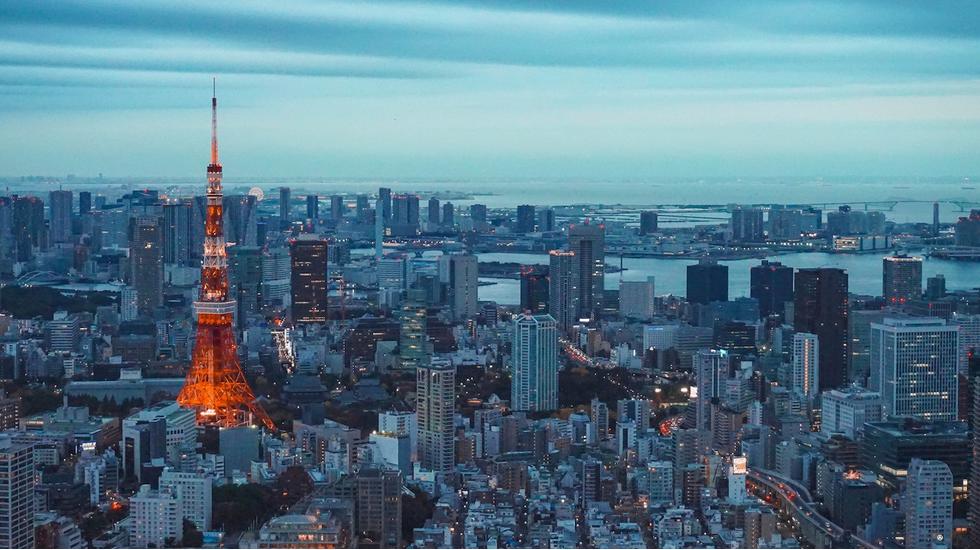 Visitors Visitors to Tokyo never fail to get carried away by a giddy sense of expectation at seeing the city's throbbing neon lights, softly lantern-lit bars and sci-fi-like, skyscraper-filled skyline. With the unexpected and jerks of surprise - such as salarymen walking pet cats, or middle-aged women dressed in head-to-toe leather jiving to old school rock and roll in public spaces on a Sunday afternoon - lurking around every corner, Japan's vast capital lives to entertain, whatever the time of day.

Yet the ear-blasting clatter and jangle of pachinko parlours sitting alongside the eye-assaulting shop fronts of areas such as Harajuku can often threaten to overwhelm, and for first-time visitors the main difficulty in traversing this bustling, buzzing city can be finding a space to breathe. But for every high-rise heavy street, there lurks an escape route into another dimension; a teeny alleyway filled with non-descript doorways through which haven-like tea rooms, tranquil gardens, secret sake bars and stylish sushi counters await, offering a welcoming, embracing calm.

So how to uncover Tokyo's tranquil alter ego? Our advice: ditch the standard guidebook and wander the city's streets without aim; Tokyo is a city of vibes rather than landmarks, and each of its neighbourhoods unveils a different side of its endless faces. Stroll the neon-lit backstreets of Shinjuku and you'll find the futuristic city of the future, so often portrayed on the big screen, materialised in real life. Or while away a day along the leaf-lined streets of Yanaka, snacking from shops whose time-worn facades recall a Tokyo of centuries passed.

Those with the time - or inclination - to delve beyond Tokyo's tourist-tempting hotspots will be the ones who return, again and again, knowing there are ever-more surprises waiting to be discovered down the city's infinitely alluring labyrinth of backstreets.

Claska is Tokyo’s original design hotel, with sleek interiors and homely vibe. Its 20 rooms are split into different categories – from zen-feel tatami mat rooms complete with sliding paper doors, through to modern, more western-style rooms with antiques and comfy furniture (some revamped in 2018). The hotel’s location in the relaxed area of Meguro is a welcome distance from the tourist path, and a cherry blossom hotspot come spring. There, you’ll find countless second-hand shops, quiet shrines and sento bathhouses. Claska, and its surroundings, provide the perfect antidote to the crowds and bustle of Tokyo’s busier neighbourhoods.

Going beyond the typical repertoire of Tokyo’s luxury properties, The Capitol Hotel Tokyu offers an array of insider experiences to guests, allowing you to dip a toe into the country’s often mystifying culture. Geisha dinners at nearby historic restaurants, Shinto ceremonies inside majestic shrines and sumo-stable visits are all offered by the hotels’ concierge, making it a stay well worth splashing out for. Rooms feel homely and distinctly Japanese; the vibe is more traditional inn than ultra-modern skyscraper.

The 15-room TRUNK hotel is one of Tokyo’s best-located properties, sitting right in the heart of Shibuya, just a hop, skip and jump away from the renowned boutique-heavy area of Omotesando (the Champs-Élysées of Japan). Designed as a community-conscious hotel, TRUNK welcomes bypassers into its various public spaces, including a restaurant, pop-up exhibition space, convenience store, standing yakitori bar, and even a rooftop chapel. The Made in Japan design concept of the hotel means everything – including the mini-bar wines and convenience store beers – is produced as locally as possible.

Wired Hotel is stroke of design genius, put together by local master craftsmen whose handmade interiors – such as washi paper walls through to custom-made leather chairs – accommodate all varieties of traveller from budget-conscious guests who book out its bunk-bed rooms through to the less cash-struck, who book the chic penthouse suite with a second thought. Expect carefully thought out design and amenities, including deep-soak tubs and yukatas (without the flashy extras) right in the heart of Asakusa, Tokyo’s original entertainment district.

For one-night pit stops in the capital or nights which don’t end until the early hours, 9hrs’ capsule pods always fit the bill. Quite unlike the coffin-style vessels of collective imagination, these futuristic-feel, comfy pods offer the additional bonus of a book-by-the-hour option, giving you a convenient base for a quick shower, nap and refresh. 9hrs have properties across Tokyo, including a base at Narita Airport, with prices starting from around £20 per night per person. Both women-only properties and women-only floors are also available.

Book & Bed hosts its guests in cubby holes enclosed between library-style floor-to-ceiling bookcases, containing both Japanese and English literature. Exposed, industrial-chic design mixes with the comforts of endless reams of paper at its three Tokyo locations – Shinjuku, Asakusa and Ikebukuro. Privacy is at a minimum, but at £26 per night it makes an ideal one-night stop over for enthusiastic bibliophiles.

This hotel slots seamlessly into Shibuya, the fashion hub of Tokyo, with its wood and stone tiered architecture and refined interior design. Upcycled materials are repurposed into modern furniture, and walls are adorned with work by local artists. Browse the hotel’s shop, which sells a curated array of items ranging from clothing to food, before pootling on down to the bar for cocktails whipped up by expert mixologists.

Park Hyatt is one of Tokyo’s original luxury hotels, whose frills cascade from the grandeur of the lobby to each of the en suites’ Aesop amenities. Impeccably attentive staff and views of Mount Fuji add extra pizazz. Thought you recognised the hotel? Scarlett Johanssen and Bill Murray graced the hotel when filming Lost in Translation.

The preservation of Aman’s signature serenity is flawless in its first city location of Tokyo. The incredible use of space in each bedroom makes you forget that you’re in a hotel; the airy rooms designed by the Australian architect Kerry Hill are filled with natural wood, stone and paper, echoing traditional, sleek Japanese homes. Enjoy the sweeping views of Tokyo while honing your folding skills with the delightful origami paper provided in each room.

Cosy ryokan inn vibes meet luxury hotel at the 18-storey HOSHINOYA Tokyo, which benefits from a hot-spring onsen. The overall feel here falls somewhere between peaceful traditions and a casual modern attitude, exemplified in the cotton-jersey kimonos provided for guests.

In a city dominated by towering office blocks and hotels, BnA Hotel Koenji offers something a little different. Produced by the Bed & Art Project (BnA), the hotel centres around supporting the local arts community. Supporting up-and-coming Japanese artists, each room is designed by a local creative, who then receives a share of the hotel’s profits. Choose between one of only two rooms: the first depicting wolves running around the room’s walls, and second a zigzag of black and white stripes. Spend evenings at FrontDesk – no, not the lobby, but the hotel’s bar, a popular spot for local creative.

Sleek, minimalist design, faultless amenities and rotating art galleries – what else did you expect from Muji’s debut domestic hotel? Rooms are compact but elegant; natural hardwood floors, stone bathrooms and muted colours are perfectly complemented by streamlined Muji furniture and filled with all the Muji products you could imagine. Start your day with freshly baked bread and pastries at the bakery before heading to the hotel’s library to brush up on design and the arts – and don’t forget to stock up on Muji products at the flagship store.

Parquet flooring and geometric patterns welcome you into this design-centric hotel. Whether you opt for Wired’s cheap and cheerful hostel-style rooms or the stylish penthouse with views across the Hanayashiki amusement park, all bedrooms are decked with furnishings made by local Asakusa craftsmen and indulgent Duxiana mattresses. Dine and drink at Zakbaran on the ground floor for seasonal meals paired with an extensive list of rare Japanese sake. Tokyo’s tourism scene can often be hard to crack – ask at reception for the hotel’s free tours of Asakusa.

An entrance concealed behind an abstract wooden facade leads into [email protected], a contemporary hideaway in the city’s Oshiage district. Designed by cult architect Kengo Kuma, the hotel has an industrial style characterised by natural plywood, exposed concrete ceilings and metal showers. Each room has its own smartphone complete with free local and international calls, internet access and a digital Tokyo guide for guests to take out as they explore the city – a welcome addition as you weave your way around Tokyo Skytree and down towards Sensoji and the Sumida River.

A hotel for lovers of industrial style, Hotel Koe is defined by its poured-concrete interiors. Start your day at the in-house bakery – with a menu designed by famed Ata chef Satoshi Kakegawa – on the ground floor before exploring Tokyo’s Shibuya district. Spend evenings admiring the sleek, monochrome design of the hotel’s minimalist rooms.