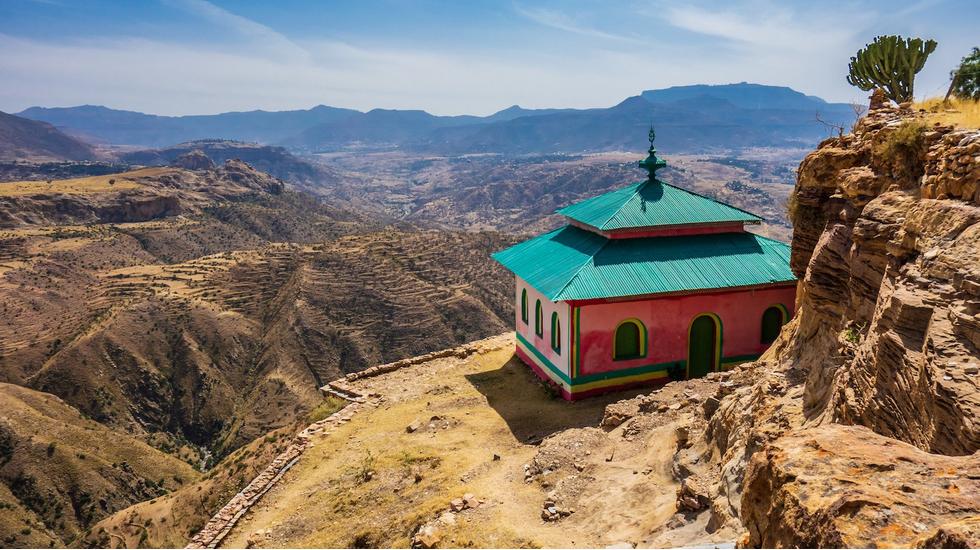 Feet Feet bare, belly pressed against a slab of rock, I inch my way along the ledge. The grainy surface feels oddly reassuring, given that beyond its edge lurks a sheer 200m drop. Across the gorge, a row of flat-topped cliffs rise abruptly like a set of colossal teeth; a lone eagle hovers lazily above the void. The next careful steps lead into a small cave, a locked wooden door improbably etched in the cliff side - we have beaten the priest to his church. "He's on his way," explains Zelasie, our guide. By that, he means that the man with the key is currently clambering up a vertical wall of stone, as we had moments earlier.

At the base of the wall we'd stood perplexed as we were told to remove our shoes in respect. A group of men sat idle in its shade. Above, only an ever-expanding tower of sandstone. To the untrained eye, this looked like a dead end. To the waiting scouts on hand to help us climb, it's a sort of rustic ladder, pocked and marked by centuries of the climbing devout. In a moment of Free Solo-inspired madness, I'd turned down the rope harness on offer, opting to go it alone - well, not quite alone. As the scouts pointed out the best hand and foot holds, climbing became a vertical game of Twister:

"Left foot here! Right hand there! No, this right, not that one!"

Upwards four-and-a-half metres and one dizzying ledge walk later, a simple padlock remains the last obstacle to Abuna Yemata Guh, the church cut straight into a cliff face. It's one of around 120 in Tigray, Ethiopia. A mountainous expanse of bare, razor-edged peaks jutting from flat plains of arid desert-like scrubland, the country's most northerly region is shrouded in myth and legend, none more captivating than its bizarre rock-hewn churches. Here in the jagged Gheralta massif there are 30 or so. Carved into solid rock, hidden atop mountains and hollowed out of vertiginous cliff sides, they're some of the most obscure and hard-to-reach places of worship on earth. Despite this, the churches are still very much in use, serving the local community as they have done for hundreds of years.

Ethiopia's unique brand of Orthodox Christianity took hold in Tigray in the 4th century, when King Ezana of Axum became the first monarch to embrace it. By local estimations, the churches of Tigray aren't much younger, dating back as far as the 5th century. The history surrounding them is hazy at best with little known about why they are so improbably placed, carved out of the sides of mountains. One theory is to escape destruction: while current-day Ethiopian Christians and Muslims get along peacefully, they didn't always. Back in the Middle Ages, inter-religious tension could easily boil over into the razing of a church.

But these impractical locations weren't solely for practical reasons. At least some of the reasoning, according to Zelasie, was good, old-fashioned biblical sadism. Getting there is part of the test, he tells me, one only the truly devout (and a few crazy "ferenjis" - Ethiopians' word for foreigners) pass. As we wait for the priest, and my heart rate drops back to its normal, non-petrified rhythm, Zelasie explains that going to church is a regular part of the weekly routine in Tigray. The local flock will scale its 4.5m wall, shuffling across its perilous ledge without a second thought. Even new mothers, newborns tightly swaddled on their backs, make the climb to baptise their babies.

Zelasie is something of a regular at Abuna Yemata Guh; he was here a few weeks ago for a special mass in celebration of the church. More than 100 people made the precarious climb to worship, he says. I try to imagine that many people, teetering on boulders, perched on these narrow ledges, gathered in prayer 2,580m above sea level. The thought alone makes my stomach drop like a faulty lift.

Eventually, a young man arrives on the ledge. He's shrouded in a robe, dove-white - the colour of happiness in Ethiopia - and, despite the ascent, looks calmer than a sloth on Valium. With a small nod of hello, he unlocks the door and beckons us inside. It's dark in the church, the only light coming from a hazy shaft of sun streaming through the entrance. As my eyes adjust, I ask about the young man's age - in his early 20s, surely this is the youngest priest in Ethiopia.

"This is the priest's son, Atsbha," explains Zelasie. A young deacon - a priest in training - he's been entrusted with the church key as the priest himself is running late. Inside, the church is simple, a small cave with carpeted floors and painted murals covering its roof. With no wind, rain or sun exposure, the images on the ceiling have been perfectly preserved. Like a biblical comic book, the stories of Christianity plaster the roof - depictions of the Nine Saints who helped spread the religion through Ethiopia in the 5th century, the 12 Apostles, and Abuna Yemata, the church's founder.

We're alone: a rare treat, I'm told. The young deacon picks up an ancient leather-bound bible, opening it for us to look at. Beautifully vivid images cover the pages: priests and saints, oval-eyed and depicted in inks of red, yellow, and blue. "When I come here, I lose everything. I feel free. It's not like anywhere else. It is a special place," says Atsbha, leafing through the pages, now jaundiced and greasy with age. I have to agree, even as a non-believer something eerily ethereal hangs heavy in the air. His wide eyes are glassy as he tells of his plan to dedicate his life to the church and the community, just as his father has. We leave Atsbha contemplating his future and begin our trek to another nearby church.

We visit Maryam Korkor, a monastery church devoted to the Virgin Mary. The hike is a punishing two-hour scramble over boulders and through narrow rock passages. Less vertiginous but no less demanding than the trek to the previous church, at points we're surrounded by nothing but rubble and stone, no trace of a route, until Zelasie points out the next "path". In the distance, we see the cliffs of Abuna Yemata Guh - a series of sandstone pinnacles, the tallest pointing skywards like a gargantuan finger.

The church sits atop a mountain plateau surrounded by a serene garden of menorah-shaped giant cacti. When we arrive, sweaty and bedraggled, the resident monk is sitting alone beneath the vaulted arches of the church, cocooned in a brilliant canary-yellow robe, a crucifix clutched in his hands. A large tour group has just left and a quiet cool, peace fills the space. Maryam Korkor is semi-monolithic: a half-building, fixed onto a cave, carved from the mountain. Four tall, stone pillars stand at its centre.

For more than 70 years the monk has called this place home, 400 breath-stealing metres of ascent away from the rest of the world. Even here, other priests and deacons regularly seek out his council. The remote location, 2,400m above sea level, suggests that this is a place for the devout - the gruelling trek to reach it certainly feels like a test plucked from the Old Testament - but Ethiopia's increasing popularity has led to an influx of travellers. At first, the monk wasn't keen on all the attention, but after the government intervened to make Tigray's churches easier to visit, he's accepted the regular tourist visits. I suspect he'd rather have the peace, and we leave him alone to pray before another group arrives.

My feet feel like boulders as we trudge back down to earth. As the adrenaline wears off, I quickly realise just how shattered I am. But despite my exhausted legs, my mind is completely clear. Looking out over Gheralta's landscape of soaring spires, I wonder if that's the reason these churches were built up here, as close to God as humanly possible.