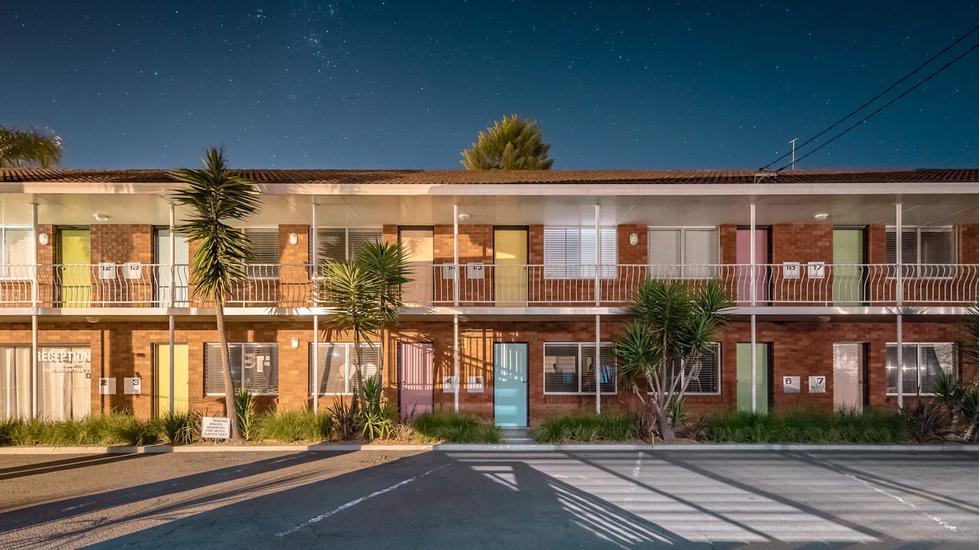 Hotel Hotel Motel 101 is a compilation of images of 101 different roadside motels within a 170km radius of Sydney. They were photographed late at night or very early in the morning, highlighting the diversity of appearances from one to the next.

I didn't intend for the collection to be this big, but I became increasingly intrigued by the individual touches of the various establishments, as well as caught up in the adventure itself. Before I knew it, I was at 70 and I was hooked. I thought that as I'd got that far, I may as well reach 100 - plus one more just to be sure it was enough.

The bulk of the images were taken past midnight. Even though most of us are asleep by this time, there is no shortage of people out and about doing all kinds of things. Not necessarily seedy activities (though there was that) but ordinary things like walking the dog. Others wash their car at 3:30AM, while groups often gather at the petrol station kebab stand. Probably the most unusual of all was a guy lurking around motels taking photos outside people's doors… I can only imagine how it would have gone down if someone had spotted me.

It was surprising to discover just how busy motels are almost every night of the week - more than half were close to capacity. This adds to the narrative of the collection as you ponder the story behind these transient lives.

Lost Collective will be selling prints at The Finders Keepers market in Sydney 4-6 May.