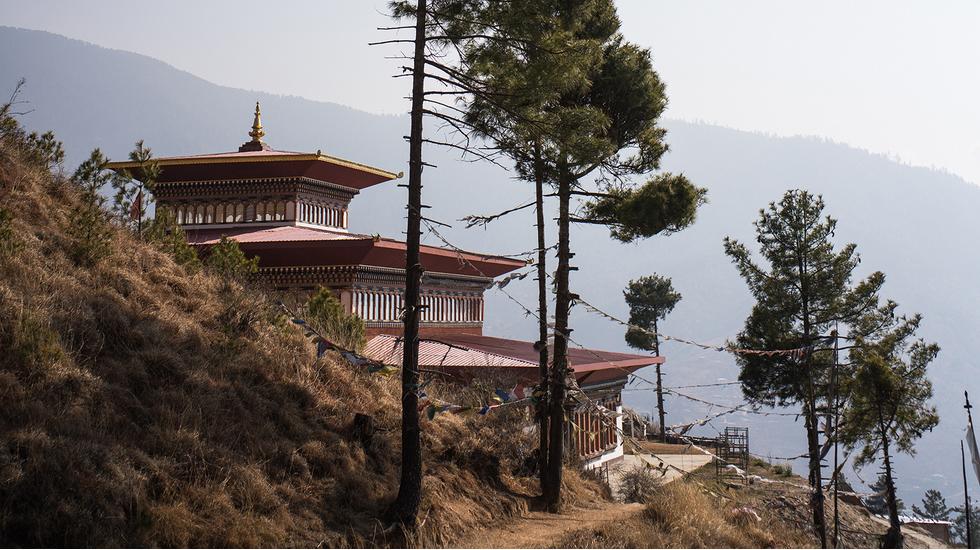 This article appears in Volume 23: The Adventure Issue. 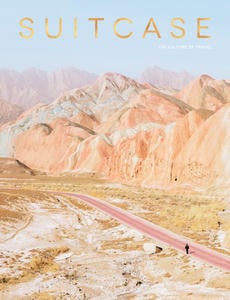 I I had been told that the descent into Bhutan is one of the most striking in the world. Indeed, as my tiny plane wobbles through the sky the majestic tips of the Himalayas loom into sight on my right-hand side, the unmistakable snowcapped peak of Mount Everest prominent among them. Dipping below the cloud cover I suddenly see the rolling green hills of Bhutan's undulating landscape emerge as the pilot weaves precariously through tree- covered valleys towards an impossibly small landing strip located on the edges of the town of Paro.

Bhutan has lingered in my imagination ever since I watched a TED Talk by its Prime Minister, Tshering Tobgay. His powerful and inspiring message, which introduced the world to his country as well as its outsized, ambitious commitment to conservation in the face of a changing climate, stayed with me.

Closed to tourists until 1974, Bhutan is a country much shrouded in mystery and rumour. A Buddhist nation cradled high in the eastern Himalayas, it is sandwiched between two of the world's most populous countries - India and China - and is perhaps best known for prioritising its population's happiness in place of gross domestic product using a socio-economic index known as "Gross National Happiness".

Less acknowledged is that Bhutan is the only country on the planet that is carbon negative. Despite being one of the smallest countries in the world it has one of the largest commitments to conservation, mandating that a minimum of 60 per cent of land must remain under forest cover forever. In travelling here my intention is to understand the meaning of happiness in a society where Buddhism is deeply rooted, but where the temptations (and collateral damage) of a more affluent, fast-paced way of life are also rising. Deep down, and like any other person, I am also curious about what makes for happiness in itself.

The first thing I notice as I disembark is the sweet scent of pine and the occasional musky smell of incense in the air. Prayer flags litter the landscape on every turn and dance in the wind - some mark the dead and others celebrate life. During my ten days here I spend time in the bustling capital city of Thimphu, where development and urbanisation are rampant, before travelling east through Punakha into the flat, earth-coloured Phobjikha Valley, which resembles the landscapes of Mongolia. I'm left speechless by the grand dzongs (fortresses) on the mountaintops - impossibly detailed wall paintings and sculptures depicting half-human, half-animal spirits hang from the walls inside. I encounter the Paro Tsechu Festival, a colourful four-day celebration held in the dzong in Paro that culminates in a throng of masked dancers in yellow robes moving hedonistically to the beat of a drum and the reverberating drone of a dunchen (horn).

My guide is Sangay Wangchuck, a charming and considered man dressed in a traditional gho. These beautiful garments resemble bathrobes, except they are woven in rich cloth in vivid colours and held loosely by a belt to create a pouch for everything from books to babies. His peaceful and caring nature is representative of most people I meet on my journey through Bhutan. Those I speak with are full of pride when they talk of their country and hold a deep and profound reverence for the environment and animals that share this kingdom.

On my last day I make the two-hour hike to the famous Tiger's Nest. This magnificent monastery perches precariously on an outcrop of rock, protruding from a tall and dramatic cliff face in the Paro Valley. I had expected the journey to be a well-trodden tourist path, but the two-hour climb up a rough, surprisingly steep path proves me wrong. I weave my way through a dense and fragrant pine forest as well as signs proclaiming cheery statements such as "A clean and beautiful environment is a feast for the soul!" and "Let's celebrate environment day every day!" It's a final reminder of Bhutan's unwavering commitment towards environmentalism.

As I reach the top I take a moment to appreciate the misty green valleys that stretch out below me and reflect on my travels in this beautiful land. The growing temptation of urban development is at odds with Bhutan's continued ecological integrity, and it's clear that this small country is at a turning point. Breathing in the crisp, clean air, I wonder if it will be able to manage its hunger for economic growth alongside the preservation of its distinctive culture, society and environment. The secret to happiness might hang in the balance.

Discover More
A Journey Through Bhutan: 187 Monks and One Pair of Shoes
Read now