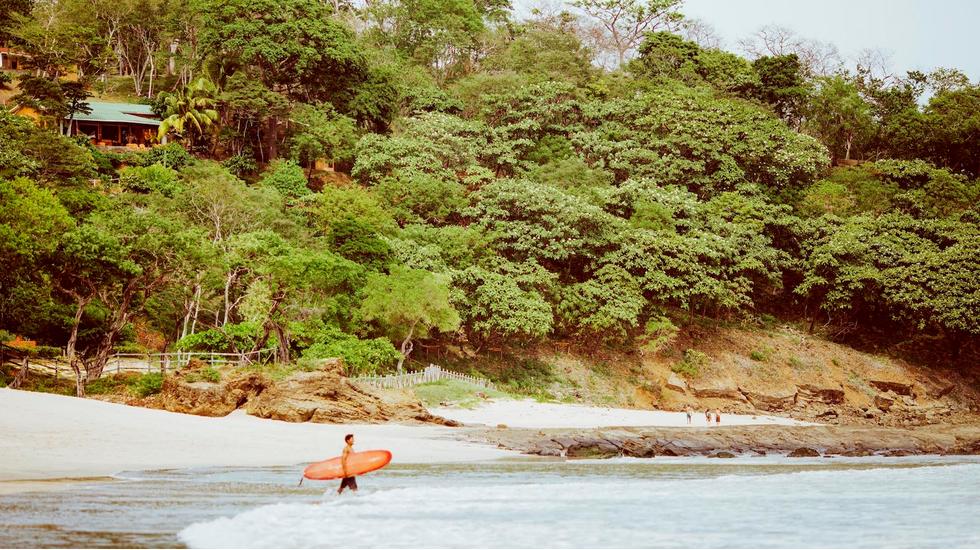 The The offshore winds of Playa Maderas tend to give rise to vivid dreams. Before arriving in Nicaragua, it had been weeks since I could recall my nightly reveries. As it turns out, rum on the rocks, good conversation and an ocean breeze is an infallible recipe for lucidity.

Everyone has their own reasons for visiting Playa Maderas. Despite being just 20 minutes away from the bustling beach town of San Juan del Sur, the Pacific Coast's most tranquil enclave feels miles away from the real world. For some, it's just an alternate version of reality - a place where you can have your surf, sand and success, too. At the heart is Maderas Village, a boutique-hotel-meets-creative-colony that has become a second home for beach-loving artistic professionals. When the chaos of New York and Los Angeles becomes too much, the magnetism of Maderas beckons. I'd seen the Village's envy-inducing Instagram feed of surfer babes on horseback, yogis doing headstands in the sand and sunbathers lounging in lace hammocks - and just had to go.

After a rough ride up to the top of a steep dirt road, we arrive to a round of sunset cocktails on the penthouse's open-air deck. We bask in silence, save for a series of mysterious echoes, which Maderas Village's Canadian co-founder Matt Dickinson explains are coming from a sound therapy session currently in progress. It's not your typical beachside rubdown, but then again, this isn't your typical hotel. Bottomless margaritas are swapped for sun salutations in a jungle-encircled yoga studio, while evenings are spent conversing under a canopy of constellations in the garden. Dickinson, a Toronto transplant with a background in commercial real estate, arrived in Nicaragua with the intent of opening a hotel. Back then, the concept to create a utopia for modern travellers was supported by just a few cinderblock-exposed rooms and a whole lot of vision.

"I've always loved hosting dinner parties where there were a lot of intellectual debates and good discussions. I wanted to be able to selfishly hang out with the most interesting people of our generation", says Dickinson. "It was about changing the perspective on vacation and paradise. I don't like thinking of us as a destination that people go to for a week and only go to once, it's much more of an extension of your life."

In the process, the Village has become a mecca for remote-working creatives - the kind you might see hot desking in Brooklyn's coffee shops. About 20%of the clientele are return visitors. Swedish musician Tove Lo, for example, has been here three times already and recently played at their New Year's party with Icona Pop. Others, such as members from bands like MGMT and Broken Social Scene have worked on their albums in Maderas' own recording studio. With works by former artists-in-residence, like LA-based Tofer Chin, scattered across the property, it's easy to feel inspired.

"We knew from the beginning that we wanted to position ourselves as a creator's paradise. I always wanted to build out the creative infrastructure to support that. I'd love to do a dark room next," says Dickinson.

The expansion plans go beyond adding casitas to Maderas' 40-person occupancy utopia. In fact, the founders just opened a second hotel by Playa Marsella, BayHouse, which will serve as a stepping-stone to international projects.

Word of mouth has turned the area into an artistic hub, with other properties boasting their own inspirational draws. Up the road, HulaKai Hotel features a pavilion designed by Japanese surf photographer and architect Junya Oishi. The property also hosts artist-in-residence programs and dinners prepared by travelling chefs. Meanwhile, Morgan's Rock, a 15-bungalow resort on a private beach just outside of Maderas, pairs secluded luxury with an organic farm and jungle reserve. Down by the beach, backpackers sip Toña beers under the shade of colourful shacks, while surfers catch waves until the sun disappears behind the coast's signature shark-fin-shaped rock formations.

Distractions such as catching rays on a catamaran are within easy reach, but for creative types it's the energy of Maderas that differentiates it from other tropical retreats. As we eat banana pancakes for breakfast at a large communal table, I discover just how many people have extended their stay. Some intend to come back within the next few months and others have just never left.

We head to the music studio, where we meet Mike Freesh, a producer from LA who came to Maderas Village to work on Interscope artist Saint Mesa's debut album. He greets us with a groggy wave, adding that he's just woken up from "the craziest dream" - the kind that seems to be contagious around here. He kills the silence with a song. It's the first one he's ever written and just one of the many reasons he hasn't returned to LA yet.

"Back home, I've always been a producer. I've always helped other people, which is fine, but something about being out here allowed my mind to be free enough to let my guard down," he says. "I'm now making a debut album, which I'd never considered doing before. It's really trippy. This little valley has the strangest and magical effect. Everyone ends up with a smile on their face."

The concept of a studio where you can lay down a track with a view of the surf was always part of the plan, adds Dickinson. But even if you aren't a musician, you can still find a sweet spot somewhere between the warm winds and mellow conversations with fellow thinkers and doers.

It's only been two days, but after an afternoon of surfing and an evening spent listening to the strums of an acoustic guitar, I fully understand the appeal of the Maderas life. For a second, I consider the idea of changing my flight and letting my hair stay salty for a few more days. That night, I happily float into one last surf-themed dream. It's crazy, inspired and fuelled by those offshore winds - the kind you only catch in a paradisiacal reality.