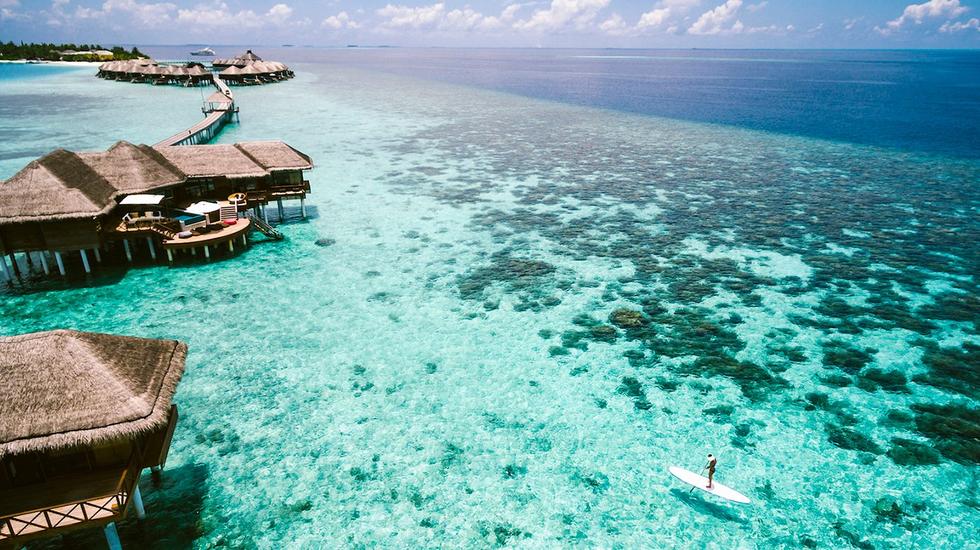 Lisa Lisa Bauer isn't your average gardener. She tends her plants bowed on her knees, delicately snipping and zip-tying branches to nursery frames made from upcycled baskets. But look closer and you'll see there's definitely a hint of magic at work. Lisa does all this while breathing through a scuba tank and regulator, floating six metres underwater.

This is how they do the gardening, Maldives-style. While most travellers visit the Indian Ocean islands for holiday overkill (luxury over-water villas, saintly-white sandbanks, brilliant blue waters), it is the iridescent, rainbow-coloured reefs winking back from below the surface that are the country's real stand-out luxury. Before you know it, they ambush you and you'll have donned your snorkel or scuba gear for a closer look.

"People are still surprised when they learn that corals and reef systems are alive, but you'd be surprised by how fast some of the corals grow," says Lisa, lead marine biologist at Huvafen Fushi, a five-star resort located in North Malé Atoll. A pioneer of coral adoption and reforestation programmes, the PER AQUUM resort has replanted more than 100 miniature underwater gardens to date, transplanting fractured branches and staghorn corals onto sustainable frames. "Over time, the broken pieces of coral grow onto these frames, creating artificial reef systems - it gives them a fighting chance for long-term survival."

Within years, Bauer hopes Huvafen Fushi's coral reef garden will be a frenzy of pufferfish. Given time, faster growing Acropora corals (such as staghorn and table corals) can completely cover the structures and run amok.

Understandably, coral adoption is a priceless form of sustainable tourism that encourages visitors to invest in not only their tan lines but in the country's underwater future. Because of rising water temperatures and the archipelago's increasing susceptibility to coral bleaching, the workshops offer a critical lifeline for the country's marine life.

For nature lovers, the good news doesn't end there. Similar programmes have been a success in Baa Atoll, a 35-minute seaplane flight from Malé, at the Robinson Crusoe style resort of Anantara Kihavah Villas and at Landaa Giraavaru's Four Seasons Resort Maldives, where Eden-like, coral-style shrubberies are now tended by marine experts. Here, the hotel's coral propagation project has transplanted a humpback-sized 120,000 fragments of coral - making it one of the most successful reforestation projects of its kind in the world.

Even if diving isn't your thing, online monitoring and social media updates are available wherever you are in the world, so there's no excuse not to get involved. And as the saying goes, ringing true: darling, it's better down where it's wetter.