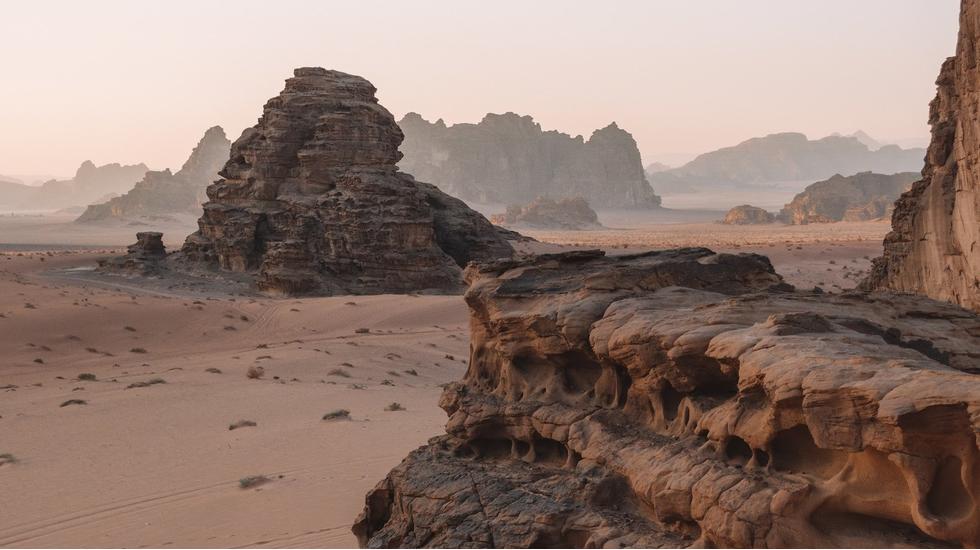 An artist's residency in Amman leads to unexpected friendships. Sites such as Petra, the Dead Sea and Wadi Rum take the breath away, but it's Jordan's welcoming people that leave a lasting impression.

Born again in Jordan, my name, Lizzy, became Layal. Despite my family having century-old roots in al-Sham - the Arabic moniker for the Levantine region consisting of Syria, Palestine, Lebanon and Jordan - this was my first trip to the Hashemite Kingdom.

Arriving from London to complete an art residency at Darat al Funun, I arrived in Amman with nothing but my suitcase and the phone number of one of my mother's former school friends from Lebanon in the 1960s. Though I was a little apprehensive about spending five weeks in this unknown land, I needn't have worried; a series of chance encounters meant that I was immersed in Jordanian culture. As I travelled across the country, Jordan seemed to welcome me and adopt me as one of its daughters. By the end of the trip, I was reluctant to leave.

My Jordanian home was in the artistic Jabal al-Weibdeh neighbourhood, in a building beside the Darat Al Funun cultural centre, and on a road leading to Downtown Amman. With bustling souks and lively restaurants, Downtown Amman is akin to a labyrinth in which you can buy anything from traditional dresses to saucepans - while driving a good bargain, of course. It's also where you can find Hashem, a restaurant serving the city's best falafel and hummus (even thinking about it makes my stomach rumble) and the Duke's Diwan, the domain of a man who was to prove a significant figure during my stay - the man who renamed me Layal.

The Duke's Diwan (Diwan Al-Duq) began its life as Amman's first post office. Built in 1924, it later became a hotel, before being bought by Mamdouh Bisharat, the Duke of Mukheibeh. As the rest of Amman underwent modernisation, he took over the building to ensure that its history remained intact.

"Diwan" means guesthouse, and the Duke's Diwan welcomes anyone and everyone off of the streets and up its stairs - it has welcomed many politicians and celebrities throughout its history. Lucky visitors might be joined by the Duke for tea and a piece of knafeh brought up on a plate from Habiba, a sweet shop located downstairs.

Not far away, in Jabal al Jofah is the Duke's home, a place full of art - pieces that he has acquired and collected, and works he has made himself - where he hosts friends from across the world, introducing them to Jordan and connecting them with one another at dinners cooked using the produce from one of his farm. Welcoming diplomats and jewellers, professors and journalists, artists and opera singers, it was the site of meetings between all sorts of minds and spirits. It was in the Duke's home, as I gazed over views of Amman, that I met many of the people who would look out for me during my stay.

Other significant figures I met during my stay include Widad Kawar, the owner of the largest collection of Jordanian and Palestinian dresses, costumes and textiles, much of which is on display in the centre that she established: Tiraz. While many know Widad as Umm l'ibas al-falasatini (the mother of Palestinian dress), others refer to her affectionately as Auntie Widad. I am a fourth-generation embroiderer, and together with a Palestinain woman called Zahra, Widad spent time educating me about Palestinian tatreez (embroidery). By the end of my trip and several weeks of regular sewing sessions - and despite the language barrier - Zahra and I established a strong bond through our mutual love of thread.

Through Zahra and Widad, I befriended Ahmed in the Jordan Craft Center, which is a space dedicated to preserving local heritage and creating an international market for its jewellery, pottery, mosaics and, of course, embroidery. Everything for sale comes with a story about how it is made, who made it, and the history of that craft - all of which Ahmed will tell you personally. You will also leave satisfied knowing that whatever you had bought is 100 per cent handmade.

Ahmed sent me to spend time with a family who works for him in in the north of Jordan, in a village called Al Jabal Al Akhdar (meaning green mountain). Here I was welcomed into the home of Eman, a lady who has embroidered since 1999. I swapped samples with her, her sisters and her mother before visiting their workshop. We ate traditional Jordanian meals together on the floor, and even took a trip to Ajloun Castle along with her husband and children, a vantage point from which you can see Syria, Lebanon and Palestine.

During my time in Jordan it was impossible not to visit Petra, the capital of the Nabataean Kingdom and the country's most famous archaeological site. I also travelled to the Dead Sea, the lowest point on Earth, where the water's salt concentration is so high that bathers float. Yet the site that really took my breath away was Wadi Rum, an expansive desert where sunrise and sunset are pure magic. As I looked up from the sands to the twinkling stars, I understood why this place is known as the Valley of the Moon. While I came to Amman to give workshops and help with an exhibition, I was able to enrich my stay by collaborating with young artists and curators. My time in Jordan taught me about the country's customs and, while I would like to say that it was Petra or Wadi Rum that left the biggest impression on me, it was the people more than anything else that really made my stay worthwhile.

Thanks to Jordanian hospitality, whenever I had a free hour new friends would turn up outside my home and introduce me to their friends and acquaintances. Between gallivanting with the Duke and tatreez-ing with Widad, I never had a dull moment - even when heading to the airport.

On my last morning in Jordan a car pulled up outside my apartment building. When the window rolled down it was the Duke; he had wanted to make sure I got to the airport safely and on time. While on the airport road, we stopped off at a farmhouse. After putting the key through the door, we walked into Um El Kundum, the Bisharat family farmhouse, which was built in 1860. Situated in what was once the breadbasket of Jordan, it overlooks plains of wheat. Inside, it's home to a private chapel and dozens of photographs that tell the story of Jordan and Palestine - it was a glimpse into the area that you won't find in any gallery or museum, and the perfect end to my trip.

Back in London, the memory of my time in Jordan still lingers. Zahra and I send each other photographs of what we are embroidering over WhatsApp, while my new family often phones to ask how I am, and when they should expect to collect "Layal" once again from the airport.