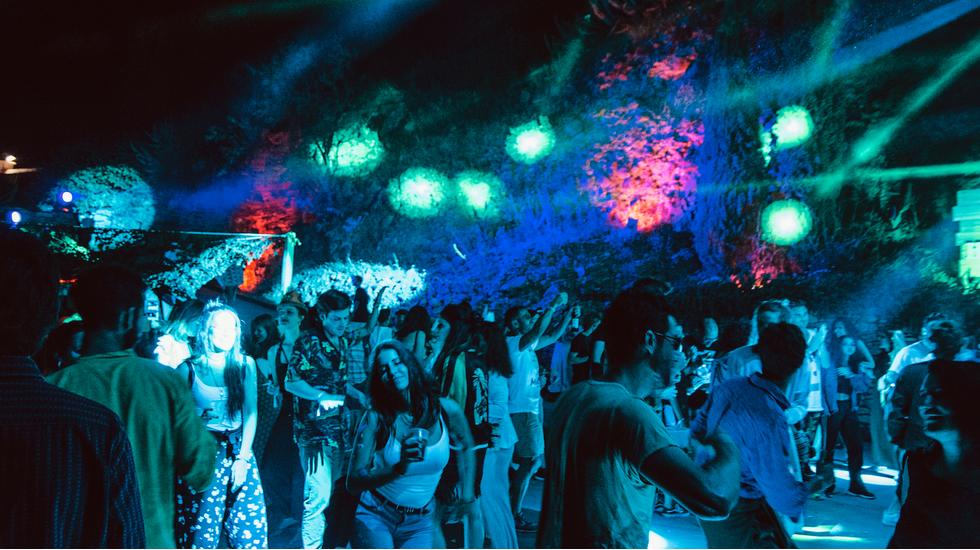 Imagine Imagine your mate threw a house party. Except, rather than a gritty East London flat, their house is a 15th-century monastery surrounded by vineyards in the heart of the Andalusian countryside, just on the outskirts of Ronda. And, instead of your usual party suspects (iPod control freak, political bore, girl who's your new best friend, boy chewing his face off, etc.) the crowd is boho, beautiful and unashamedly bourgeois - as the French would say, "bobo". You can swap your Stella for a sangria (ok, Fanta lemon and red wine) too.

Welcome to UVA. The love child of Moody Collective and Morning Fever, this 500-capacity music and visual arts festival which made its debut this year was "made for friends by friends" and beckons guests to frolic in the foothills of the Descalzos Viejos ("old barefoot mountains") for three days of sun-soaked hedonism.

While summer club bangers are no doubt pumping out along the Malaga strip less than a two-hour drive away, this eclectic gathering brings together 30 or so young artists and "music diggers" laying down everything from "early jazz to afrobeat, bossa-nova, funk, hip-hop, electronica, disco and house, and even techno" to in-the-know Euro cool cats. Sound pretentious? Maybe, but this grass-roots initiative feels remarkably un-sceney and throughout the weekend you'll bump into the same friendly faces getting collectively giddy on summer dreams and cerveza. Best of all, there's not a flower crown in sight.

There's also no camping - a relief given the 30-degree heat - so get a room in town or round up the troops and rent an Airbnb nearby (for about €60 each a night you can get a pretty decent finca-esque pad). While the music kicks off in the afternoon, don't miss checking out Ronda's many delights - getting your culture fix in during the day will also help assuage any impending I'm-just-here-to-party guilt. So head to the nearest heladería and ask for "tres bochas" (three scoops) then wander through the charming city with its picturesque plazas, white and yellow buildings and historic bull ring (it's said to be the birthplace of the sport), stopping for a mandatory Instagram shot in front of the vertiginous Del Tajo gorge, ice cream melting down your arms in sticky streams.

And now it's playtime. Before the sun begins to set, make your way along a dusty dirt track, a 15-minute descent to the festival site in Ronda's bucolic basin, where you'll be greeted like old friends and promptly asked to sign a two-page disclaimer making your (silly) self fully responsible if you get overexcited and topple over the edge of something. For while the labyrinthine paths, crumbling stairways and ivy-strewn terraces of the monastery yield many a dark corner for doing dark deeds, they also mean it's pretty easy to stack it if you're a bit pissed - and footloose and not so fancy free is not something you want to be.

From then on in, the party is yours for the making. Stock up on tokens for food and drink (surprisingly reasonable, a pint will set you back just €1.50) then follow the smoky trail to the barbecue for rustic burgers and chicken skewers - dodgy food vans are not a thing here - eaten with your hands in the shade of a colourful parasol, funky disco beats wafting overhead. Give your dancing fuel a chance to digest by heading back to the entrance to perch on the hilltop and watch the sun paint the sky a magnificent magenta-pink before joining the steady stream of revellers snaking their way down to the party as inky darkness sets the scene for a night full of whimsy and weirdness.

You'll lose the next five, six, eight hours flitting between an expansive main area with sweeping views and the more clandestine jungle stage, hidden in a clearing of trees and adorned with fairy lights. Get down and dirty to the likes of Rush Hour's Antal, Donna Leake, Greg Beato and San Proper alongside bronzed girls in paisley flares and crochet crop tops and chiselled boys in silky kimonos, before regrouping in one of the monastery's crumbling enclaves - the heady soundtrack and naughty nymphs mean you'll soon be under UVA's spell. But, like Cinderella at the ball, sunrise comes around all too soon and that spell must be broken, with a wobbly journey home to bed. But that was just your first night. You'll be back again tomorrow. See you there.