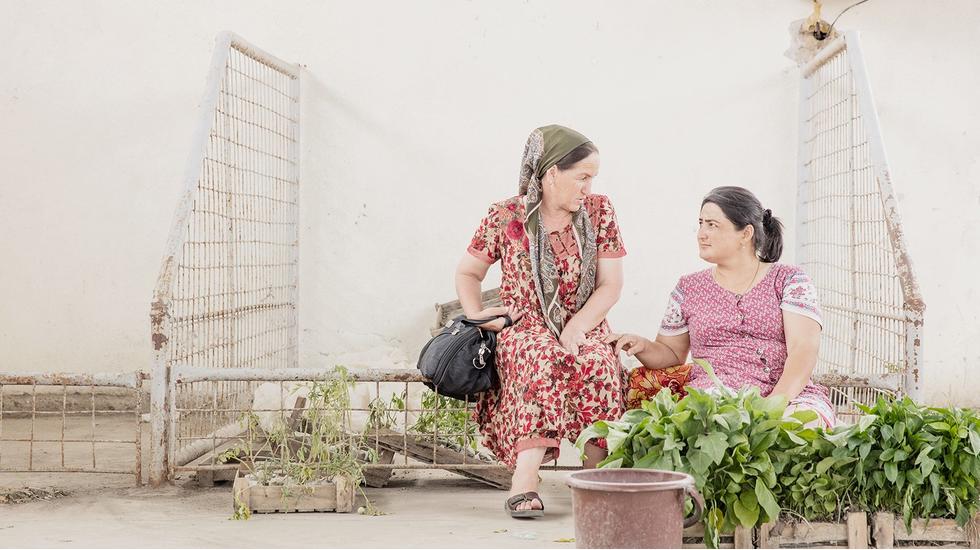 I'd I'd put money on the fact that you haven't been to Uzbekistan and probably couldn't point to it on a map without a little head-scratching. One of only two doubly landlocked countries in the world (the other is Liechtenstein), the storied cities scattered across the grasslands, deserts and valleys that make up Uzbekistan were once the beating heart of the ancient Silk Road trade route connecting China with the Middle East and the Mediterranean. Today, however, the country receives only a handful of foreign visitors, while most citizens don't even have a passport.

Reactions to my trip range from the somewhat depressing "Is that where Borat's from?!" (nope, that's Kazakhstan, and he's not a real person FYI) to the blinkered yet not uncommon "why on earth would you want to visit a 'Stan'?!". Despite being Central Asia's most populous country and one of the world's richest nations in terms of resources (large oil and gas reserves mean Uzbekistan is entirely self-sufficient in terms of energy, while it's also among the top producers of cotton and gold), Uzbekistan occupies a thin slice of my own knowledge, limited to vague allusions in my school history syllabus that skated over the country in reference to the Persian Empire and Soviet Union.

This cloak of mystery is gradually being lifted, however, as a new government has relaxed visa requirements in a bid to attract more tourism, and Uzbekistan doubled its intake of visitors in 2018. Regardless, tourist numbers remain low; I can count the number of British accents I hear on one hand, despite following the standard route tracing the Silk Road cities of Tashkent (the capital), Bukhara and Samarkand. In Uzbekistan, you are off the beaten track simply by being here, and in a week of constant surprises, I glimpse oxymorons that both puzzle and delight as the country seeks to navigate a new path between an exoticised, religious past and a modern, cosmopolitan future.

A trip to this "land of a thousand shrines" largely revolves around religious sightseeing, paying homage to the spectacular mosques, madrassas (religious schools), minarets and mausoleums that I had previously associated with Iran. These sacred places offer an opportunity for tourism following decades of authoritarian, isolationist rule, and the country's attitude of tolerance towards other cultures and religions will no doubt serve this well. This happy coexistence of liberality with deep-rooted religious beliefs makes sense; Uzbekistan is and always has been a melting pot. For centuries, thousands of merchants of diverse origins traversed the country trading ideas, values and beliefs as much as they did goods.

We begin our pilgrimage in Tashkent, where this diversity is reflected in architecture that is a bewitching mishmash of ancient, colonial and soviet buildings, jostling alongside one another in a bricks-and-mortar personification of the nation's multifarious history. We spend a day gawping at towering, sand-coloured monuments covered in a kaleidoscope of blue mosaics and tiles, topped by voluptuous aquamarine domes that glimmer in sunlight that shines over 300 days a year. At nightfall we jump on the metro - a subterranean contrast to these sky-high edifices, it's a magnificent labyrinth of palaces built under the Soviets, each station individually designed by local artists and architects. Ornately constructed out of metal, granite, marble, glass, ceramics and carved alabaster, the aesthetic down here would make Wes Anderson weak at the knees.

While Lenin may have attempted to stamp out local creativity and culture in a bid to secure control, traditional artistry is currently seeing a renaissance. In a quiet Tashkent neighbourhood we drink spiced tea in the fruit tree-filled garden of ceramicist Akbar Rakhimov, who modestly brushes away our guide's assertion that he's the most celebrated potter in Uzbekistan. Instead he points to his father, whose dream it was to start a ceramics school - an aspiration that Akbar has recently realised. Today, his grandchildren are getting their hands dirty, deftly moulding clay into figurines impressive beyond their years. It's a nod to an entrepreneurial younger generation that is embracing modernity while trying to revive long-standing cultural traditions.

I am surprised by present-day attitudes towards the era of Soviet rule. While my schoolgirl conception is largely one of suffering under the iron fist of communism, the Uzbeks I meet are quick to point out positives such as the abolishment of sharia law, compulsory education and a world-class intelligence system, the KGB, to whom many attribute the country's internal security today (unlike Afghanistan, Uzbekistan has largely managed to quash factions such as Isis). The impressive power of the old KGB can be seen in its behemoth headquarters in the town centre, an intimidating, modernist building that has now been nostalgically reimagined as the grand Hotel Uzbekistan.

Family remains central to Uzbek life, with girls marrying young - brightly lit wedding shops seem to crop up on every corner, while heavily made-up teenaged brides pouting for extended photoshoots in front of various landmarks make for excellent people-watching. This family orientation means that, in a country where tourism is still in its genesis, it can be tricky to experience local life, as the majority of people still spend their leisure time at home rather than spilling out of restaurants, shops and bars.

Known as the "fairy-tale town" or "the Eastern dome of Islam", Bukhara is a holy relic with more than 140 historical monuments dotted across its new and old town. The crumbling remnants of a city wall and a hulking fortress dating from the fifth century are an ode to the legendary emirs that ruled these lands for centuries.

The focal point of the town is Lyab-i-Khauz, where a tranquil 17th-century pond draped with weeping willows makes Udaipur spring to mind. It is surrounded by three of the most striking buildings in Central Asia - Kukeldash Madrasah, Nadir Divan-Begi Khanaka and Nadir Divan-Begi Madrasah - each a mind-bogglingly impressive example of medieval Islamic architecture. Our necks seize from craning our heads upwards to look at their vertiginous pillars of ornately carved wood and inlaid mosaics.

Bukhara is also a city of artisans, a womb that has for centuries given lifeblood to over 100 different crafts including metal chasing, suzani embroidery, miniature painting and calligraphy. The current government is making efforts to propagate these traditions and we pay a visit to the home of Davlat Toshev, a seventh-generation miniature painter whose artworks sell internationally for thousands of dollars. Bent over handmade silk paper, microscope in one hand, paintbrush in the other, he painstakingly daubs intricate depictions of ancient life using natural paint, tempura and gold leaf while earnestly speaking of his wish to reinstate Bukhara as the centre of miniature painting. Before I leave, he places his hand on his heart and bows - the traditional Uzbek way for men to greet or bid farewell to women - thanking me for visiting his country and urging me to spread the word about Uzbekistan in my own.

It's a similar story when we knock on the door of his brother, Rakhmon, a master of suzani embroidery whose cool, characterful house is like an Aladdin's cave of Silk Road curios. Every surface is draped in technicolour tapestries and priceless antiques. Plates piled high with homemade plov - the hearty national dish comprised of rice, meat and boiled vegetables, scattered with raisins and laced with cumin, cardamom and turmeric, this one topped with quail eggs - Rakhmon explains that suzani remains an important part of an Uzbek bride's dowry, the meticulous needlework depicting flowers, almonds, pomegranates and snakes not only symbolising love, wealth, health and wisdom but also demonstrating her patience. His children are taking the baton and becoming expert embroiders, and just that week he's sold several silken tapestries to a US art collector.

From these celebrated brothers to the humble artisans that line the streets of the old town and the workers we meet on an impromptu visit to a silk factory, there is a profound dedication to seeing craftsmanship thrive. As we peer through the turrets of the amber-hued Ark fort that evening, it occurs to me that Bukhara's cityscape is its own tapestry telling this story; the skyline is populated by mosques and minarets which stand as proud relics of the past, while cranes and ferris wheels point to its rapid development along an as yet unknown trajectory.

The final stop on our Silk Road pilgrimage, Samarkand is one of the oldest existing cities in the world, built on the site of Afrasiab and thought to date back to around 1500 BCE. Described as the "pearl of the East" or "garden of the soul", its crowning glory is the imposing Registan Square, a Unesco World Heritage Site where three spectacular madrassas, built to attract scholars of astronomy, literature and psychology, represent some of the finest examples of Islamic architecture in the world.

Today, Samarkand is the cultural capital of Uzbekistan, and yet again I lose Joel as he snaps endless pictures of grandiose facades and tiled domes. The gargantuan magnificence of these monuments never wears thin, and I sit quietly in the shade and watch a group of impeccably dressed septuagenarians engaged in a high-spirited game of chess, their periwinkle-blue shirts, navy trousers and saxe skull caps reflecting the hues of the mosaics. I steal a clandestine photograph of them and, at dinner that evening, Joel and I pour over our reams of images as we sip vodka (a Russian introduction) and tackle a table that groans under the weight of fresh salads, herb-laden yoghurt soup, mutton-stuffed dumplings and deep-fried cheese in a balmy whitewashed courtyard.

It's only when I return to London and visit my parents for supper on a decidedly less balmy terrace a few weeks later that I discover my mother visited Uzbekistan over 40 years ago. After some extensive bookshelf rummaging she pulls out a gloriously 1970s floral-patterned photo album that I leap upon and eagerly begin to flick through. I skip past grinning portraits of retro outfits and questionable haircuts and soon begin to see domes and minarets I recognise. Not only that, I am stunned when I come across one, two, three, four images where, upon laying the bright screen of my iPhone alongside her faded snaps, we realise we must've been stood on the same spot, down to the very inch. I flip over another page, and it's then I see a group of impeccably dressed elderly gentlemen gathered around a chess table in Registan Square. They can't be the same group, but I like to think that the men that I saw were their sons, and that their sons will gather around the same table, and their sons after that.