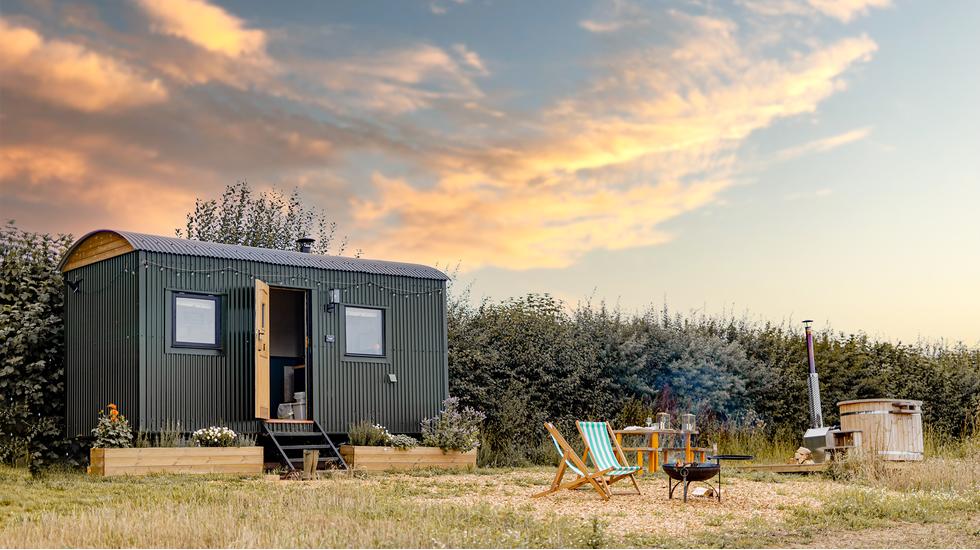 It's It's official: camping is cool. Pop-up tents have graduated from festival tagalongs to state-of-the-art bunting-clad bell tents, log cabins have become more visually appealing than our interiors board on Pinterest, and beachside bothies have transformed into something of an architectural marvel. The thing is, the purpose of these boltholes is to offer visitors a space to refuel and recharge while being at one with nature, so to properly feel the benefit of the great outdoors, you've got to be prepared to go off-grid. And, no, we're not talking about dragging your duvet outside for a sleepover in the garden. We mean heading into the depths of the great British countryside: Oxfordshire.

Okay, okay, Oxford hardly qualifies as "remote", particularly given its edgy hangouts, culture-rich corners and lively student population, but head 40 minutes' south of the city centre and you'll find vast stretches of untouched greenery. We're making a beeline for Banbury, partly for its painting-like landscape, but largely to bed down at the UK's coolest glamping site - the Fat Pheasant Shepherd Huts.

Spread across 500 acres of rolling countryside, this working farm is home to three design-driven cabins - Maggie, Dolly and Huxley - each of which has its own private field. Upon arrival, you'll be greeted by your incredibly attentive host, Jo, who will cheerfully wave you off with an enormous wooden hamper packed with fresh local produce. Then, after following a winding dusty road and a series of hand-etched signs, you'll be ready to indulge in some genuinely restorative country living.

We're staying in Huxley. All three cabins have an open-plan layout, with silhouette-hugging king-sized beds framed by floor-to-ceiling windows (with blackout blinds in place to block out the dazzling sunrise). You'll be sinking into pink pin-striped linens and resting your head on sumptuous pillows. While there's no WiFi, a handy built-in USB port for charging those all-important gadgets means you'll be ready to take some snaps of your glorious surrounds.

Is there a bathroom?

Of course. Long gone are the days of emptying the bucket. Concealed behind a walnut-wood sliding door is a sleek and stylish bathroom. Decorated with matte-black tiles and gold-plated taps, the spacious walk-in shower comes complete with an impressive selection of organic toiletries. More of a bath kind of person? No problem. You'll find a candyfloss-pink clawfoot tub out on the deck for al fresco bathing, made even more inviting by a bamboo screen - not that anyone will disturb you.

What's on the menu?

Anything you like. A fully furnished kitchen comes stocked with all the essentials: think a Le Creuset dining set, glass jars stocked with English breakfast tea pouches and fresh coffee granules. In the compact drawers, you'll find every kitchen utensil you could possibly need - there's even a hob on hand in case the weather decides not to play ball. Outside, a massive, ready-to-use gas-powered BBQ awaits, while the fire pit screams "post-dinner marshmallow toasting". You'll also find an eight-seater wooden table, sporting hand-picked flowers and lantern-cradled candles.

Duck-egg blue bicycles are available for hire, allowing you to take a spin around the breathtaking landscape. You'll find a shelf in your hut laden with books to read, and a top-notch selection of board games, too. Scrabble, anyone?

We'd argue you can't get much greener than this. Us Brits love to talk about the weather, so it's only right we give you the heads-up on the temperature side of things. A wood-burning fireplace takes centre stage in the cabin, with a pile of freshly chopped wood at the ready; there'll be no need for woolly knits here. Recycling-wise, two outdoor bins make for a smooth waste-disposal process.

Each cabin comes with its own bell tent, and four easy-access beds cater for wheelchair users. Huts, however, don't have step-free access.

It goes without saying that animals have the right of passage here, so don't be surprised if you spot the odd pheasant. You're unlikely to encounter another human for the entirety of your stay, though, which may work in your favour if you're looking to whisk your main squeeze away for a romantic getaway.

Don't forget to bring a swimsuit so that you can enjoy the hot tub. Slot some logs into the attached fire and sink in for a countryside sundowner. It would be rude not to enjoy an early-morning brew in the toasty water.

Nothing. While there's a parade of independent shops a 10-minute drive away, we recommend stocking up on supplies pre-arrival.

Huts start from £150 a night on a three-night-minimum basis - plus £90 per bell tent. Discover more at fatpheasenthuts.com