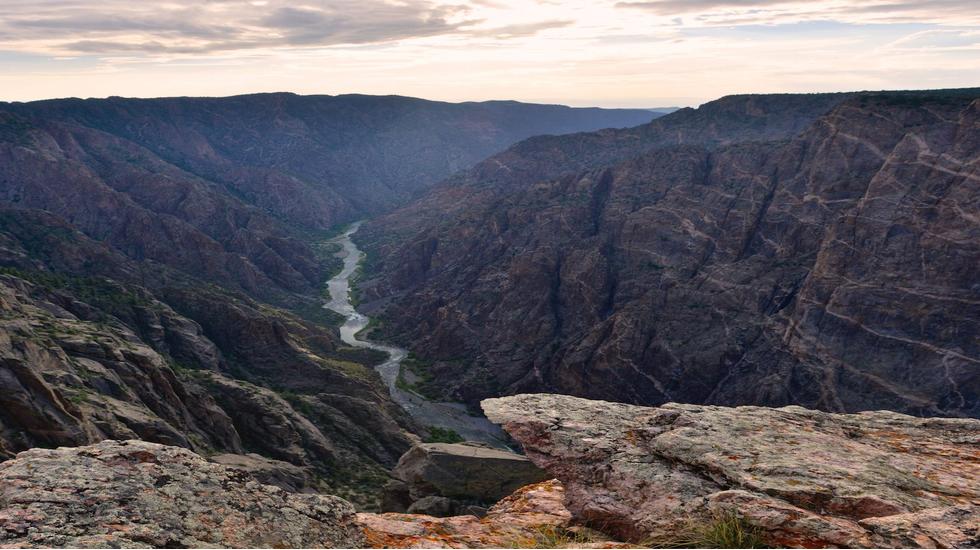 It is the town at the end of the tracks that really catches my eye. On first inspection, Silverton appears to have been trapped in time - if John Wayne rode in with his six-shooter, no one would blink an eye. Mountain peaks press in from above as I walk dirt roads lined with colourful houses that seem to have been stolen straight from a film set. I pass the old county jail, a crumbling wooden shack with iron bars inside, and the faded porch of the Shady Lady Saloon, which lived up to its name until the middle of the last century. If I shut my eyes I can still hear the clap of horses on the dusty roads, the gunfights and the whisky being poured, the isolation when the winter snow set in.

But today the old jail is filled with artsy trinkets and the Shady Lady sells sandwiches. Ultimately, the gold rush is over. The new treasure is tourism itself, and that creates a second problem - the more the West tries to artificially recreate those old days, with souvenir shops and wagon rides tacked on, the further it moves away from the reality of what it was actually like to live on the frontier. To truly understand the West, I come to realise, you need to go back to the land itself.

That's how I met Poste. If you were to combine Clint Eastwood and Casanova, throwing in an impressive white moustache, then you'd have something close to this old cowboy. Horses, dirty jokes and more horses. We took a ride out in the foothills of the San Juans, 20 miles north of Silverton, near the hot-springs town of Ouray, steep iron-tainted valleys flushed with ponderosa forests, waterfalls and the still, blue waters of Lake Lenore. "It's named after a prostitute," Poste says with a wink. "She must have been pretty good at her job." We pass Jackass Flats - a high plateau - named because mules would unload ore carts here, three at a time, pulled from mines deep in the earth. He tells me about the Outlaw Trail, a relay of stashed horses and hideouts that crossed these hills from Montana to Mexico, and how somewhere among them a bandit named Kid Curry buried a fortune in gold robbed from freight trains which has never been found.

But the real treasure turns out to be Poste himself. Here is a man who can sit in the saddle for 40 hours straight, who lived alone and off the land in the Arizona wilderness for seven months, who travelled like a hobo on horseback across the entire country, who says that politicians are "lower than a snake's ass in a wagon rut", who riles against control, against regulations and against the taming of this once-great country. Poste is the Wild West itself, living, riding, swearing and putting up its fists.

I found that frontier spirit elsewhere as well. In the ghost towns where broken windows and empty picture frames echo dead lives like songs lost on the wind; in natural hot springs and the vapour caves of Ouray, sacred to the Ute, where they have bathed for centuries; in the sunrise that colours the Great Sand Dunes from cold grey to instant pink; in the endless farmlands and machinery and hard, weathered people still working the land. But most of all, I found it under the earth itself.

In the Bachelor-Syracuse mine, founded in the 1890s on the outskirts of Ouray, I walk 1500ft into the dank, wet darkness below. Here, at the turn of the last century, men would work in the black for 12 hours a day chipping out with chisels and endless hammer swings veins of the treasure found within. Their only protection was a solitary candle. If the flame went out it meant dead air. They had minutes to reach a safe zone, counting steps in the pitch dark: 300 forward, then a left, 1,200 more and they'd live. Take a wrong turn and they'd surely die. Later, as technology improved, conditions worsened. Hammers and chisels were replaced with one-man drills, known as widow-makers, whose blowback dust would tear open the insides of a man's lungs within five years. They came looking for gold, but what these men found was a darkness broken only by the flickering candlelight on cave walls.

And that's the thing - almost no one got rich. It is estimated that under 1 per cent of the people that came out to the West actually ended up making their fortune. Those who did were often captains of industry, rich Europeans, the big men. The legends of the Old West, just like those of the American Dream today, were based on the promise of gold. But more often than not the little men get stiffed, as the bosses profit, and ghost towns become covered with weeds.

However, that doesn't mean the legends are gone. On my last night I camped out under the stars at Black Canyon of the Gunnison National Park, a spectacular 2,000ft gorge of the Gunnison River, barely known outside the state. As I stood on the edge of the precipice, the crash of the river far below, the last glimmers of sun fired the rocks with sinuous purple streaks. Away from the glare of the city, the skies there are some of the darkest on Earth; stars unfurled like rainbows in the clouds of the Milky Way. Those old stories of the West may have been written in gold, I thought, but the legends were born here: in the land, in the stars, in the freedom of open space and the boundless possibilities of our imagination. This is where the dream began, and it is still worth our scars and our toil.

This article appears in SUITCASE Volume 17: Myths and Legends. Aaron Millar's latest book, The 50 Greatest Wonders of the World, is available to buy from Icon Books, Amazon and other retailers.

The The legends of the Old West are written in gold. In the Rocky Mountains of southwest Colorado, ancient mines burrow the land like honeycomb, ore carts tangled in weeds rust by the side of the road and tracks stop dead in the middle of nowhere.

After gold was discovered there in 1859, ten years after the first California strike, the Rockies were awash with fortune seekers. They came in wagon trains, on foot and later by train. They braved thousands of miles of wild country and bands of Native American warriors defending their ancestral lands. They came chasing the promise of prosperity, and their dream was the dream of a nation: to conquer the West, to occupy this land "from sea to shining sea", to build wealth and industry and bend the wilderness to the will of man - this was America's "manifest destiny".

The setting may have changed, but the vision is still the same today: freedom, hope, a better life built by the boundless possibilities of our imagination. The legends of the Old West, those scars of blood and toil, became the seeds of the American Dream.

I came to the San Juan Mountains of southern Colorado - the home of the Ute Indians, where fur trappers, outlaws and mountain men once roamed - to try and find something of that original seed. If the American Dream was built on the spirit of the West, can something of that dream still be found in the jagged peaks of the Rocky Mountains today?

The railroad was at the heart of it all. The Denver and Rio Grande line, built by the Civil War hero General William Jackson Palmer in the late 19th century, ran from Denver to the mining towns of southern Colorado. Those tracks enabled settlers, supplies and sightseers to reach the mountains, and the precious metals to return. Railroads like this were the coal and steam-powered knives that carved civilisation from the wilderness of the West. And it's still possible to ride the most spectacular section of it today.

The line begins in Durango, in the southwest corner of the state. Founded in 1880, this outdoorsy town of galleries and brewpubs epitomises what made the West wild. It was here that outlaws like Ike and Porter Stockton terrorised the local community - stealing cattle, slinging guns in the streets and even killing a local barber whose shaky hands cost him his life.

Lawlessness was a way of life; miners would come down from months of isolation in the mountains and let loose, vigilantes roamed the countryside, and bringing someone to justice meant stringing them up from the nearest tree. In the Diamond Belle Saloon, where the waitresses still wear vaudeville costume and ragtime piano plays all night long, I eat dinner next to a bullet hole from a gunfight a century old. "Back then there were 57 places to buy liquor," Victoria Day, a local historian tells me, "and one church. You do the math."

The train continues to draw people today. From Durango, the tracks of the Rio Grande trace the Animas River 3,000ft up to the former mining town of Silverton, deep in the San Juan Mountains. Pioneers rode this same narrow-gauge line more than 100 years ago, and every inch of it is still powered by coal and steam - eight tonnes and 15,000 gallons of water for every trip. As I lean out of the open-sided carriage, the train teeters spectacularly on the edge of 400ft cliffs, climbing higher into the mountains like an ant on a razor blade. I feel the steam on my skin and hear the woody note of the engine whistle echoing through the canyons and their aspens above.