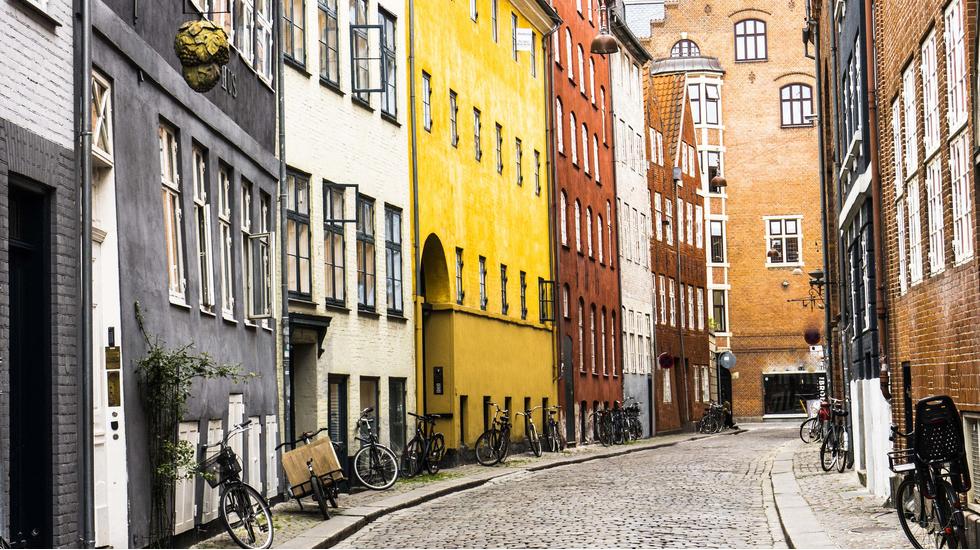 It's It's as though bad taste doesn't exist in Copenhagen. Minimalist, elegant and inventive design is simply the default; it manifests in clean, hardwood floors, light-filled spaces and form that never minimises function.

The Danish concept of "hygge" is omnipresent. In the careful attention to detail displayed in the intimate interiors of bars, restaurants, and cafés with their artfully slung pendant lamps, carefully selected furnishings and abundance of candlelight, they create warm and inviting spaces to hide away in the darker months. It flows into Danish philosophy and way of life, which values time spent with friends and family (and perhaps explains their reputation as some of the happiest people in the world).

As the weather warms up, life spills out into the streets and parks with endless outdoor activities and events. There are officially more bikes than people in Copenhagen so, if you can keep pace with the locals, it's an ideal way to get around. But Copenhagen is compact and can easily be explored on foot. With many of its highlights located in its centre, it's the perfect location for a weekend escape.

Begin with dinner in the meatpacking district, Kødbyen. Once the centre of the city's meat industry (Kødbyen literally translates to "meat city") the area has seen a surge of new nightlife and high-quality restaurants - partly due to a conscious decision by the council who owns the district's warehouses. Try the 10-course tasting menu at Gorilla, based around inventive Mediterranean cuisine. Alternatively, Restaurant Cofoco offers an exquisitely presented four-course tasting menu (with paired wines) inspired by contemporary Nordic cuisine.

It's rare that an amusement park should have such a dominant presence within a capital city, but Tivoli is a world of its own and worth a visit even if you eschew the rides for a walk around its gardens. Dating back to 1843, it's among the oldest of its kind (the oldest is Bakken, further north in Klampenborg). It's an easy way to blow a ton of cash on a myriad of unnecessary items and activities - including fine-dining options within the park walls. But from the beginning of April, Fredagsrock returns to Tivoli gardens, providing an open-air stage for local and international artists from 10PM on Friday evenings.

First things first, grab a coffee and cinnamon bun from Meyers Bagerie Kongensgade and wander towards Nyhavn and the colourful rows of houses that line Copenhagen's former commercial port. It's the classic and possibly clichéd image of Copenhagen. The oldest, no. 9, dates back to 1681. A number of eminent figures and artists have lived here, including Hans Christian Anderson who lived at numbers 18, 20 and 67 at various points in his life. These days the canal is lined with lively restaurants and bars filled with tourists and locals alike.

Soon you'll come to the architecturally striking Royal Danish Playhouse, easily recognised by its glass-encased front reflecting the surrounding harbour. A boardwalk links the playhouse to the Langelinie waterfront promenade, which connects many of the city's obligatory stops along Copenhagen's harbour. It leads past Amalienborg Palace (home to members of the Danish royal family) and onwards to Langelinje Pier and the Little Mermaid. Based on the original, darker version of the fairy-tale by Hans Christian Anderson, she's arguably underwhelming - a tiny sculpture diminished even further by the swathes of tourists obscuring her tiny form, but she's more than a century old and has withstood multiple vandals and two beheadings.

A wander through the Botanisk Have (botanical gardens) will lead you to Torvehallerne, a labyrinthine marketplace offering an abundance of fresh and local produce, gourmet food and home-brewed coffee. It's a relatively inexpensive place to stop for lunch, and while you'll find plenty of restaurants to choose from, you could just as easily return to the botanical gardens to explore its classic old greenhouses and living museum.

Bo-bi bar is the oldest bar in Copenhagen and, thankfully, one of the cheapest (a bottle of Tuborg lager will set you back 25 DKK - about £3). It's the kind of smoke-filled candlelit den favoured by journalists in 1950s film noir. Dating back to the First World War, it doesn't appear to have changed much since then. An incredibly diverse crowd happily coexist here. Smokers are definitely welcome.

Not far from Nyhavn, The Union Kitchen serves the ultimate brunch, including a taster plate combining a vast array of breakfast favourites. Other highlights include a hangover beef burger with truffle fries, a vegetarian green bowl and classics like eggs florentine or croque monsieur. Wash them down with a bloody mary, complete with bacon garnish.

If you only visit one museum or gallery in Copenhagen, the Louisiana Museum of Modern Art is a worthy choice. A 35km train ride north of Copenhagen, it's located on the coast overlooking Øresund (or The Sound - the strait that forms the Danish-Swedish border) with views of Sweden. Originally intended as a haven for Danish modern art, it has expanded to incorporate renowned international works by artists such as Andy Warhol, Roy Lichtenstein, David Hockney and Picasso. With a focus on the interplay between various art forms, its definition of modern art incorporates architecture, design, photography and film. The museum's dramatic coastal setting provides the perfect backdrop for its Sculpture Park, containing 60 sculptures overtly juxtaposed or blending seamlessly with their surroundings.

Back in central Copenhagen, Freetown Christiania is the perfect spot to spend your Sunday afternoon. Self-described as an autonomous, anarchist community, it was founded by squatters in an abandoned military base in the early Seventies. Christiania holds its own laws and regulations independently from the Danish government. For example, you can't buy a house in Christiania - you have to be given one. Photos are highly discouraged on the aptly named Pusher Street, but Christiania's maze of street art, organic cafés, bars, workshops and venues make for fascinating territory to explore. In the summer months, Cafe Nemoland hosts free concerts on Sunday evenings, providing a platform for both up-and-coming and established Danish bands.