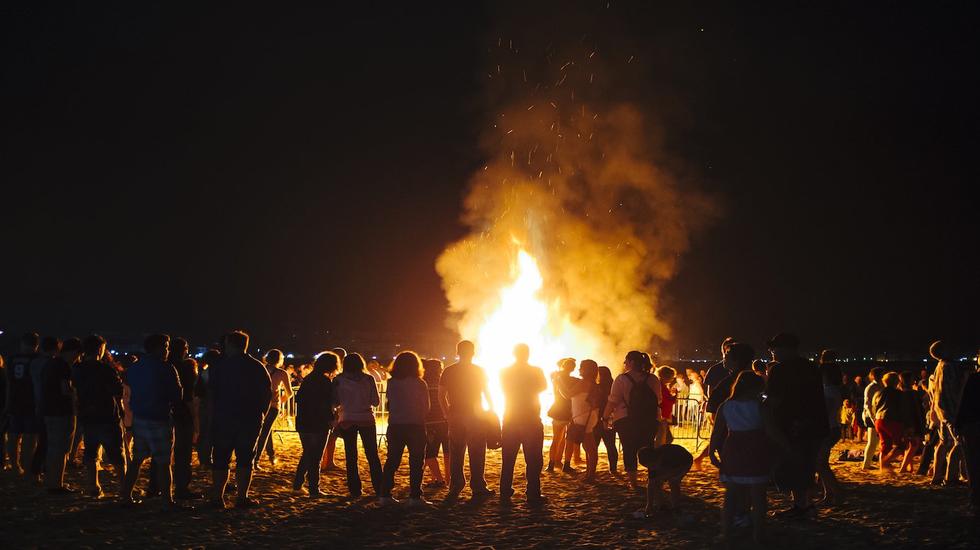 "Remember, remember the fifth of November - the gunpowder, treason and plot… I know of no reason the gunpowder treason should ever be forgot…"

If you find yourself in the UK in early November, chances are the smacks and pops of fireworks will be heard in the background of whatever you're doing each evening. This is because of Guy Fawkes Night on 5 November, which sees bonfires lit up across the land.

Beyond the UK, Guy Fawkes is best known as the inspiration behind the face mask of V in V for Vendetta. Or he may evoke hazy recollections of history lessons if British politics is your bag. But in Britain, Guy Fawkes offers an opportunity to bundle up, go outside and drink the mulled booze of your choice while remembering England's most infamous anarchist. The country goes pagan and town squares, village greens and city parks across the land are studded with bonfires with a burning effigy of Guy Fawkes sat atop.

Fawkes was one of thirteen who planned the Gunpowder Plot in 1605 to assassinate King James I by blowing up London's House of Lords during the state opening of parliament. The other twelve conspirators have fallen out of public consciousness, but Fawkes remains a folk hero or traitor (depending on your political leanings) and frequently appears on lists of the 100 greatest Britons.

Guy Fawkes - or Guido, as he later called himself - was born in York in 1570. Despite growing up under the Church of England, which rejected Catholicism, Fawkes grew up to become a mercenary fighting for Catholic Spain in the Eighty Years War. As he made his name overseas, in England disgruntled Catholic troublemaker Robert Catesby started gathering accomplices to kill the newly crowned King James, who had failed to ignite hopes of a more tolerant attitude towards Catholics.

Upon his return to London, Fawkes became embroiled in Catesby's plot to kill the king. With parliament destroyed, and its king and key politicians dead, the monarch's young daughter could be kidnapped and a revolt raised to reinstate Catholicism in the country.

Fawkes was the man charged with shuttling explosives to a cellar under the House of Lords and guarding them until the day of the state opening arrived. All went to plan, until the plotters were betrayed by a letter to the Baron of Monteagle, warning him not to attend the state opening. A midnight search of parliament was launched. In its underbelly Fawkes was found with 36 barrels of gunpowder - enough to blow up the House of Lords and beyond.

Guy was arrested and tortured in the Tower of London until he gave up the names of his co-conspirators. As members of the thirteen began to flee London, eight were captured and sentenced to be hung, drawn and quartered. Dragged through the city streets to meet his fate in Westminster, Fawkes escaped hanging by leaping off the gallows, breaking his neck and meeting his death in the process.

5 November was quickly enshrined in law as a national day of thanksgiving for the King's escape from assassination, and stayed that way until 1859. Today, it's still a national night of festivity. Part of the appeal of Guy Fawke's night is its make-do vibe: there is high potential for damp squibs of fireworks, un-cooperative bonfires and puttering sparklers. But there is also the air of danger that arises from a nation embracing pyromania for the night. In Devon, in the tiny village of Ottery St Mary, men hoist flaming barrels streaked with tar on their backs and run though the narrow streets. The tradition predates Fawkes and it's a miracle it's still allowed to continue, flying as it does in the face of all common sense and safety.

Guy Fawkes night, like many festivals that have stood the test of time, rings in a season. In this case its autumn, and seasonal apples are a key part of the celebrations, whether you're bobbing for them in a bucket or crunching though a toffee apple. Other bonfire night stalwarts are sparklers and parkin, a sticky, ginger-and-treacle laced cake. Creating your own version of this centuries-old, uniquely British bacchanalia is simple: get outside, eat sweet things, make fire. Oh, and be safe!