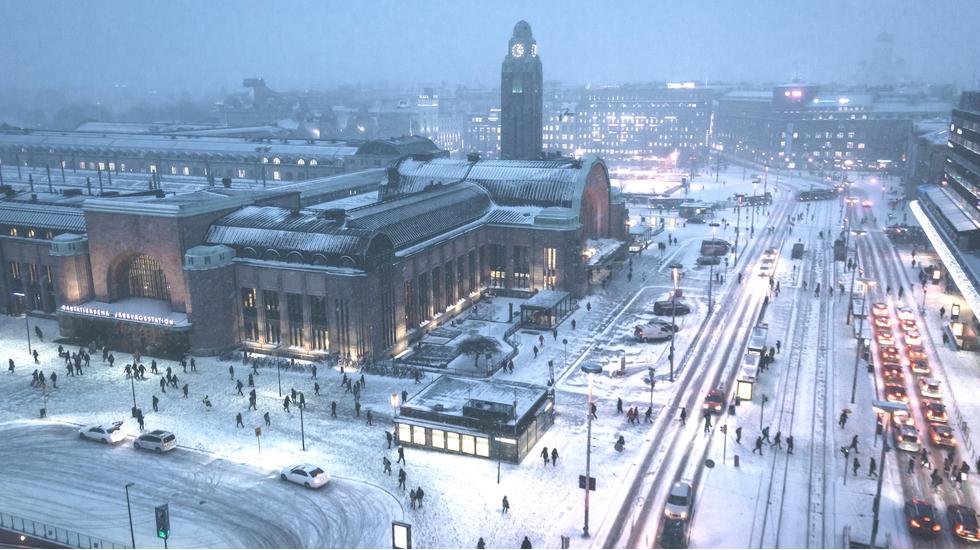 Hands Hands up if you've ever felt victimised by Uber's surcharge?

When it comes to getting around, convenience is key. We're travelling more, our lives are busier and the last thing we want to be thinking about is how to get from A to B. Step forward, Whim, the new Nordic app that's transforming transportation by taking care of the journey so you can focus on the destination.

It's just landed in Helsinki - where it's already racked up 200,000 users - and is set to launch in the UK, coming to Birmingham on 5 April. The premise? Users can combine bus, tram, taxi and bicycle journeys using a single ticket. With Gett Taxis, Enterprise, Nextbike and National Express already on board, it's geared up to revolutionise the way we commute.

Sampo Hietanen is the founder of tech start-up MaaS Global (Mobility as a Service) and the brains behind Whim. Realising that "owning a car is actually a burden for many people, but there's been no realistic alternative", he came up with Whim to fill that gap. Dubbed "the Netflix of transportation" it's set to change the face of mobility in the way that Netflix and Spotify changed entertainment and music streaming. Users can opt for an all-inclusive monthly contract (currently priced at €499) or use the app on a pay-as-you-go basis. Its aim is not just to get people on public transport, but to provide the freedom that owning a car does - and it's succeeding.

Finland has over 200,000 lakes and summerhouses so keeping that freedom was one of Sampo's primary concerns; "It's the right vehicle for every journey, more often than not it's public transport, but sometimes it is a car". Just like your mobile-phone contract, everything is included. Escaping for a weekend in the countryside? Your hire car is included. Post-work drinks got a bit out of hand? No problem, call a cab as taxi journeys are also covered. Commute consists of a bus and a tram? It's taken care of by a single ticket through the app.

Keen to check it out for myself, I headed to Helsinki to put Whim through its paces and make most of the café-culture. I used Google Maps and Whim on two different devices to see which could get me to Kuuma (said to serve the best coffee in Helsinki) fastest. Google Maps told me to walk for 15 bone-chilling minutes in -15 degrees, while Whim instructed me to hop on a tram - though it did give me the option to walk under its "green travel" section. Minutes later I was on my second cup of the day and Whim had passed its road test. The average person spends 90 minutes travelling a day; the app is so smart it gives you back an hour of that time.

Such efficiency may, in part, be why Finland is touted as one of the happiest countries in the world. They certainly look after themselves; mornings consists of ice swimming in the Allas Sea Pool followed by a blitz in a dry-heat sauna. After taking the plunge (the quick dip is supposed to rejuvenate the body by boosting your circulation) I felt like I'd earned a pulla (cardamom-spiced bun). A few clicks on the app and an exceptionally brisk, short walk combined with a fuss-free 20-minute tram and I'd arrived at a prime pulla spot. The tram ticket had displayed clearly on my phone and activated only once prompted - so far, so good.

It's unsurprising that Whim was born in Helsinki; it's a start-up city by nature and the Finnish are often ahead of their game. Like Sweden and Denmark, Finland is known for design - an ability to turn anything into something clean and functional is, according to Whim's co-founder Kaj Pyyhtiä , ingrained in their DNA. The dark winter that stretches out for a bleak eight months a year caters to creative thinking - "after all, what else are you going to do?" It's either that or all the caffeine - Finland consumes the most coffee in the world, a fact that they're rather proud of.

When the mobile giant Nokia crumbled a large talent pool was released, leaving world-class engineers and innovative thinkers with nowhere to go. The Finnish government were quick to capitalise on this, supporting the development of homegrown ideas and cultivating the collaborative openness that lies at the heart of Finnish design. SLUSH, one of the world's leading start-up events, is proof of Finland's progressive nature. What started as a 300-person community has grown into world-renowned event where 15,000 attendees can pitch their ideas to global investors. Forget the Silicon Valley sun; this is Finnish slush. And with the next cities on their hit list including Antwerp, Amsterdam, Istanbul and Singapore, it won't be long before we're all travelling on a whim...