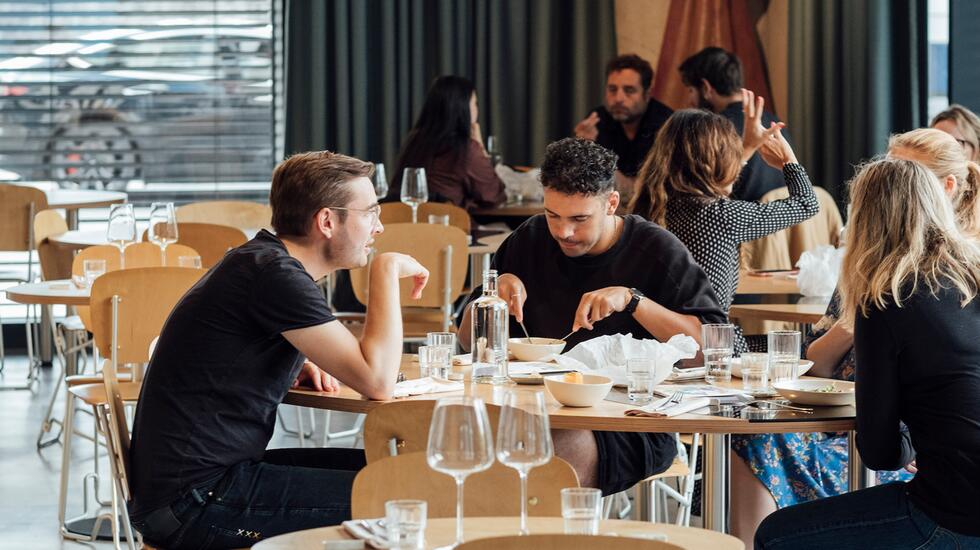 When When satisfied travellers return from Geneva, they evangelise about two things: the sheer gorgeousness of this mountain-flanked lakeside city curled around Lake Geneva, and the dazzling diversity of the food scene here. First-time visitors expecting an elegant but somewhat stuffy city built on banking and big NGOs are invariably astonished by the energetic, open-minded and multicultural spirit of Geneva, but, according to chef Walter el Nagar, this shouldn't really come as a surprise.

"Perhaps some people associate Geneva with exclusive five-star hotels and formal restaurants with fussy and traditional menus," says el Nagar, speaking in the open kitchen of his year-old (opened January 2022) restaurant Refettorio Geneva. "This isn't what Geneva means to me - Geneva has always been a city of diplomacy, peace, science, humanitarianism and community."

El Nagar was born in Milan to an Egyptian father and Italian mother, and initially moved to Geneva to run the restaurant at the The Ritz-Carlton hotel. Good things grow out of career crises, and Refettorio is the concept restaurant that grew out of el Nagar's disillusionment with the high-waste, high-price and high-stress culture of many high-end restaurants. At Refettorio, the lunchtime diners pay for the meals of dinnertime diners in need; a radical business model for a restaurant, even before we hear about Refettorio's scholarship programme, rigorous zero-waste policy and fermentation workshops. "Nothing makes it into the bin," says el Nagar. "We're trying to present a new economical model, with the same standards as high-end restaurants." And, indeed, the vegetarian £32 set menu is a high-concept gastronomical adventure, with a starter of green tomato, feta snow and condiments, main of sweet potato gnocchi with a cheese emulsion, and Jerusalem artichoke-based dessert with berries. "We're taking high gastronomy out of formal restaurants and bringing it into a completely different environment," says el Nagar.

For el Nagar, Geneva is the perfect home for a chef intent on radical experimentation. After all, Geneva - capital of the French-speaking canton of Switzerland - has been known as a progressive and ideas-driven city for centuries: the influential Enlightenment philosopher Jean-Jacques Rousseau was born here, as was humanitarian Henry Dunant, founder of the Red Cross. And today, the city serves as HQ for over 200 international organisations, a unique trait that has fostered a one-of-a-kind urban culinary environment.

Geneva's international flavour is easily savoured with a walk around the multicultural neighbourhood of Pâquis, lined with Lebanese and Ethiopian restaurants like the much-loved Parfums de Beyrouth and Awash. Over the course of our stay in Geneva, chefs at Michelin-starred restaurants enthusiastically steer us towards Pâquis; in Geneva, food lovers get as excited about a new Peruvian, Eritrean or Syrian street-food stand as they do about a tasting menu.

"But international inspiration is just part of the picture," says Venezuelan-born young chef Andres Arocena, at his new restaurant La Micheline, in the former harbour district of Eaux-Vives. "Of course it's thrilling to be able to try food and ingredients from all over the world. But Geneva's dining scene is also driven by discerning, demanding, sophisticated diners. They'll support a good idea, but if you don't impress, there are no second chances here." Arocena has no need to worry. Schooled in the most mind-bendingly creative restaurants in San Sebastián, his five-course, £100 degustation menu is a playful and memorable triumph, with deconstructed savoury dishes such as "not quite paella", an elevated poached egg creation called "oeuf 63°C", and a delightful deconstructed chocolate dessert named "lunar stones".

As we eat our way around Geneva, it's clear that chefs view the city as something of a culinary playground, where creativity is appreciated, ambition nurtured and hard work rewarded.

"I'm a lucky man to be working in Switzerland," says French chef Olivier Jean, as we sit in the light-filled salon of Le Jardinier, a new plant-forward farm-to-table restaurant in lakeside hotel The Woodward; there are already successful Le Jardinier restaurants in New York, Miami and Houston. "As a farm-to-table restaurant, we try to source everything from within a 150km radius, but I'm spoilt in Geneva. We have a vast variety of cheeses - far beyond the classic Gruyère. The lake is an abundant source of fish, such as perch and crayfish. We have excellent beef and chicken, reared in the surrounding farmland." Right on cue, Jean's weekly vegetable delivery arrives from nearby Hermance, and he steers us out of the service entrance to greet the farmers from Les Potagers de Gaia, an organic cooperative dedicated to local varietals and traditional methods. They still turn their land by horse and plough; this is how they first caught Jean's eye, on a stroll through the countryside.

As he walks us back through the kitchen, Jean enthuses about the almost madcap fervour of his favourite producers, such as Niels Rodin, a former financier who now farms rare citrus. "But my latest discovery is tofu - I've found two women in Carouge who make seven types of tofu. Geneva is full of surprises like this," he says. As he seats us at our table, he leaves us with this parting thought: "As I see it, chefs are in service to people - we try to make people happy with our food. But it's the people we find - our local farmers and producers - that help us do this. This is what makes Geneva such a paradise for chefs. It's all about the people."

Fly direct from London Gatwick to Geneva Airport with SWISS. From the airport, Geneva city centre is just a 32-minute train journey with Swiss Federal Railways.