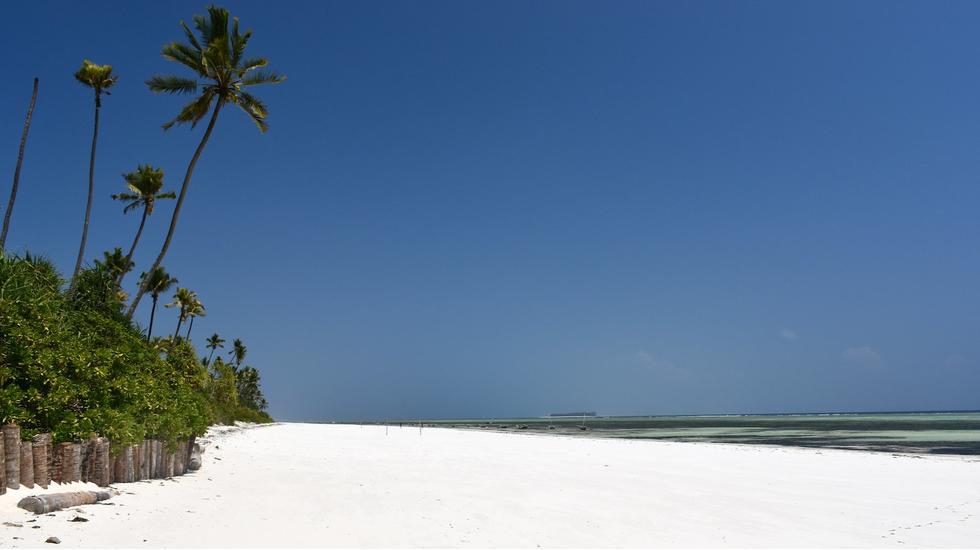 It It was a lovely way to start the trip. Out on the turquoise waters of Zanzibar's Mnemba Atoll, we sailed steadily on a wooden boat towards the shallower waters of the coral reef. As we approached we spotted dolphins on the horizon. Snorkels on, we jumped into the sea, taking a glug or two of salty water in the commotion, and swam towards the glimmer of a curved fin ahead. Several moments of exhilaration followed as we caught up with the pack: eight beautiful creatures propelling their bodies through the water with ease.

I'm here for the same reason most people visit Zanzibar - the 'see it once in a lifetime' appeal of this magical place with its enchanting Stone Town, fragrant spice tours, otherworldly beaches and coastal cuisine. Zanzibar's shores have been attracting foreign interest for centuries - Persians were among the first to settle there alongside the indigenous population, followed by the Portuguese in 1503. By 1698, control of Zanzibar had been seized by Oman, and in the late 19th century the British Empire took over, with Scottish explorer and missionary Dr David Livingstone writing of his time spent here: "This is the finest place I have known in all of Africa." In the 1960s Zanzibar went on to gain independence before merging with mainland Tanganyika. The presidents of both republics formed a union and created the United Republic of Tanzania, from which today Zanzibar is semi-autonomous.

Nowhere is this piling of foreign influences more visible than in Stone Town, where a maze of narrow alleys lead into secret courtyards, ornate balconies jut out from crumbling manor houses and oriental bazaars hum with the sounds of locals bartering.

We decide to visit early before the crowds descend. Our first stop is the Zanzibar Coffee House, a charming little place in the maze-like old town serving coffee from its own plantation on the edge of the East African Rift Valley. We sip from our cups inside the café, which is set in one of oldest buildings in Zanzibar - constructed for Sultan Said Bargash in 1885.

After, we walk to the former slave market. During the Arab rule of the island, slaves became a major pillar of the economy, with some 50,000 passing annually through the port for sale. It's a dark but insightful visit: the airless, underground chambers still contain chains bolted to the concrete.

We continue our exploration of the streets - admiring the masterful Arabic design from intricate, colourful front doors to magnificent buildings like the House of Wonders - a palace built for the Sultan of Zanzibar in 1883. The temperature is rising and we seek out the shady rooftop at Emerson Spice Hotel - an ornate tea house with beautiful views down to the port. But before long, the heat and humidity become too much, and we escape the city streets for open sandy shores.

Heading north on the island from Stone Town, colourful bunting hangs between electricity pylons, flickering like a candle in the sea breeze. A series of weather-beaten shacks line the roads, their paint cracking at the edges. On the asphalt, a fine dusting of icing sugar sand is trodden by women in brightly patterned skirts and headscarves.

It's about an hour or so to Matemwe - the quiet beach village where we're staying. Ours is a simple villa set right on the shore. We run out on to the expansive beach, where palm trees cast shade over the pale sugary sands, and into the balmy Indian Ocean. At this time in the afternoon, the tide is up and the water is deep, but in the morning it's a lagoon for about a mile out to the reef - excellent for discovering starfish, not so excellent for swimming. All that is left to do in Matemwe is lounge about, read and wander between quaint beach shacks in search of delicious Swahili cuisine.

British citizens travelling to Tanzania require a visa. You can pick one up on arrival for $50 (credit or debit card only), or get it online in advance.

Daily ferries run between Dar es Salaam and Stone Town for about £25. You can book your ticket at the port. Major airlines also fly to Zanzibar from the UK via Dar es Salaam.

On the coast, Zanzibar offers a range of options from private, remote villas like Che Che Vule to chic beach lodges like Fundu Lagoon.

To Eat and Drink

In Stone Town, try the food market in the waterfront Forodhani gardens from 6PM daily. Delicacies on offer include kachori (deep-fried balls of mashed potato spiced with chilli, lime and ginger) and mugs of fresh sugarcane juice.

On the beach, be sure to get your daily dose of fresh local coconut water from sellers walking the shoreline.

Discover More
Zanzibar: An Assault on the Senses
Read now