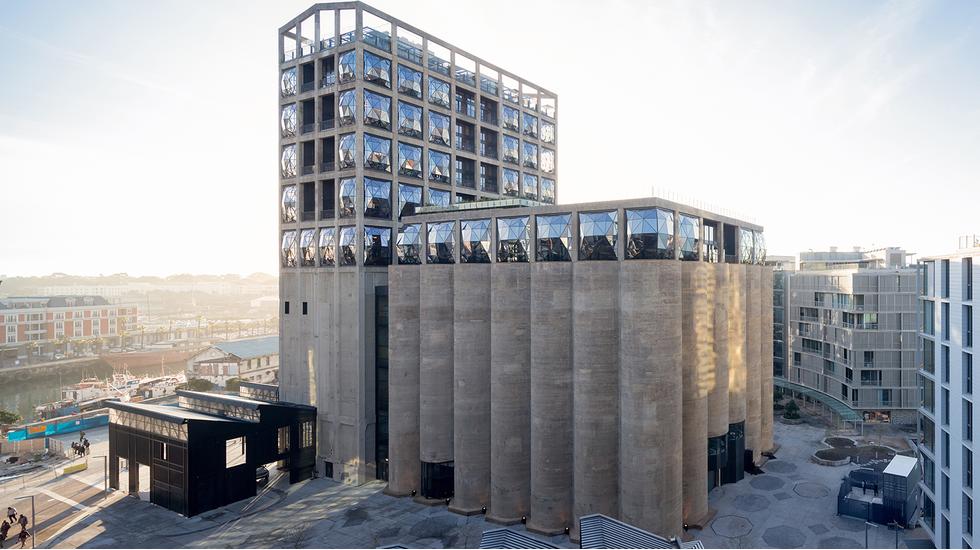 The The word 'breathtaking' is on our house style blacklist, alongside others like 'surreal' (is it actually?), 'tasty' (means nothing) and my personal bête noire, 'wanderlust' (just ew). Yet reflecting on the opening preview of the Zeitz Museum of Contemporary Art Africa (Zeitz MOCAA) in Cape Town last weekend, I find myself struggling to find a more appropriate word to describe it.

The brainchild of German philanthropist and ex-CEO of PUMA Jochen Zeitz and South African curator Mark Coetzee, Zeitz MOCAA is housed in a behemoth of a building carved out of a former grain silo under the direction of Heatherwick Studio. It's the first major not-for-profit contemporary art museum dedicated to 21st-century art from Africa and its diaspora. The aim? To display seminal artworks produced by African artists (defined as those living in or beyond the continent who are or who identify as being African) and illustrate modern discourses, ultimately telling the nation's history - and perhaps more importantly, a tale of its present and future.

So why are three white men behind it? It seems almost laughable in its hypocrisy. And it's a question on everyone's lips, though I cringed as quizzed Coetzee, Heatherwick and Zeitz on it, knowing that I was the probably hundredth journalist to do so that day and hating myself for defaulting to the glaringly obvious. Their answers were good - straightforward, honest, simple - and as such I don't want to focus on the fact, not least because it takes the limelight away from everything Zeitz MOCAA stands for. But it does need to be mentioned.

Zeitz fell in love with Africa as a traveller 30 years ago and has made it his home for the last 15. The idea was conceived back in 2008 when he first met Coetzee: "I saw enormous creativity in Africa and I didn't understand why there was no such institution here… I see myself as a global citizen and someone with a lot of compassion for Africa and I felt that something needed to be done." So the pair set up the Zeitz Collection, which Zeitz is keen to emphasise was never a private project; the vision was always for a museum that was both representative and relevant, using a range of mediums to convey environmental, social, cultural, political and personal messages.

"I am providing a platform, I am not the one who's speaking in this museum. Artists can tell their own stories. People from the outside define what Africa is and what it isn't, and that's not right. So I created this for people to speak. And why shouldn't I do that? No one else is doing it - it's a bit patronising to say 'he shouldn't do it because he's German'. That's ridiculous."

They want these voices to be heard by as many as possible, so emphasis is placed on accessibility. Entrance fees are heavily subsidised (50 per cent are waived entirely), while the decision to locate it in South Africa makes it more accessible to the international community, who are no doubt also drawn by the building - an artwork in itself. It was a happy coincidence that Cape Town's V&A Waterfront were looking for a way to modify the iconic silo (disused since 1990) into something with public civic significance at the same time that the Zeitz Foundation was seeking a space to display its collection. They approached Thomas Heatherwick to develop ideas for the adaptation - and boy, has he done good.

A gargantuan steel and concrete cathedral spans 9,500 square metres, reaching up nine floors and climaxing in a rooftop sculpture garden with views over the sprawling city and coastline. The structure (including the Silo Hotel, which opened in March) has been cut from 33m-high concrete tubes, taking 1,198 construction workers three years to create a shell of 13.6km of polished stone. In the circular entrance hall, a giant dragon is suspended in mid-flight (it previously hung in Zeitz's home) accompanied by a haunting soundtrack which reverberates around the brutalist atrium, prompting visitors to simultaneously marvel and recoil as they enter.

This sets the scene for a hundred galleries divided into performative art, curatorial excellence, photography, moving image and costume, with an education centre in the basement. Coetzee tells me this thematic structure and the collaborative curatorial effort behind it was a conscious decision to avoid hierarchy and subvert traditional forms of top-down governance. Giving a voice to (African) artists seems to be the basis for every decision, with the wider metaphor alluding to giving power back to the people. As Coetzee explains: "For a very long time in this country there was this authoritarian voice. There were no artist-centric institutions. We've made a very strong commitment to making sure the artist is heard. It's not about being perfect, it's about the dialect."

Has this discourse happened in practice? Coetzee gives the example of Kendell Geers, a conceptual South African artist who sets up institutional critique by creating installations designed to challenge authority. At Zeitz MOCAA, he fills an entire room with bricks attached to red ropes suspended from the ceiling, making it impossible to pass through without ducking and weaving - a fire hazard and not exactly wheelchair-friendly. The initial solution was to remove some bricks to make a pathway, prompting "I AM NOT HAPPY" emails from Geers. Following discussions and a last-minute cherry picker, they compromised by putting the bricks back but at an elevated height - and I met a cheerful Geers proudly showing off his work.

For both, the significance of art seems to lie in the process rather than the final result. This is evident as you ascend (via a Star Wars-esque cylindrical glass lift) through the gallery levels, where stories behind artworks are as varied as the mediums they exist in. Messages range from Owanto Berger's black-and-white nude photographs of women with colourful flowers between their legs (a reference to FGM) to the more abstract, such as Liza Lou's "The Waves" - 1,194 panels of tiny white beads strung to cover an entire room, each stained slightly differently to show the weavers' varying toil.

A less straightforward issue comes to the fore in the case of the iQhiya, a South African group fighting against the under-representation of black women in public museums. By displaying their work you automatically disempower their militancy and neutralise their voices. How did Coetzee respond? "I displayed it, of course. I had to - or we risk losing it." His body language suggests this was not an easy decision, but one in line with the museum's aim to preserve African art, and he stresses it was done on their terms. It's a novel way for a museum to operate, and both Zeitz and Coetzee - humble and almost childlike in their excitement and quick to shy away from any praise - are aware that this will be a steep learning curve, and hope the international art community will give them space to get things right. Heatherwick summed it up to me very simply: "It's imperfect, but it's a start. Is it better to not do it at all?"

So what is the legacy for the museum? Zeitz hopes people see Africa in the light Africa wants to be seen in, with MOCAA reacting and adapting to remain relevant to modern discourses. For Coetzee, it's about changing people's attitudes: "People always call it 'African art'. It's not African art, it's just art."