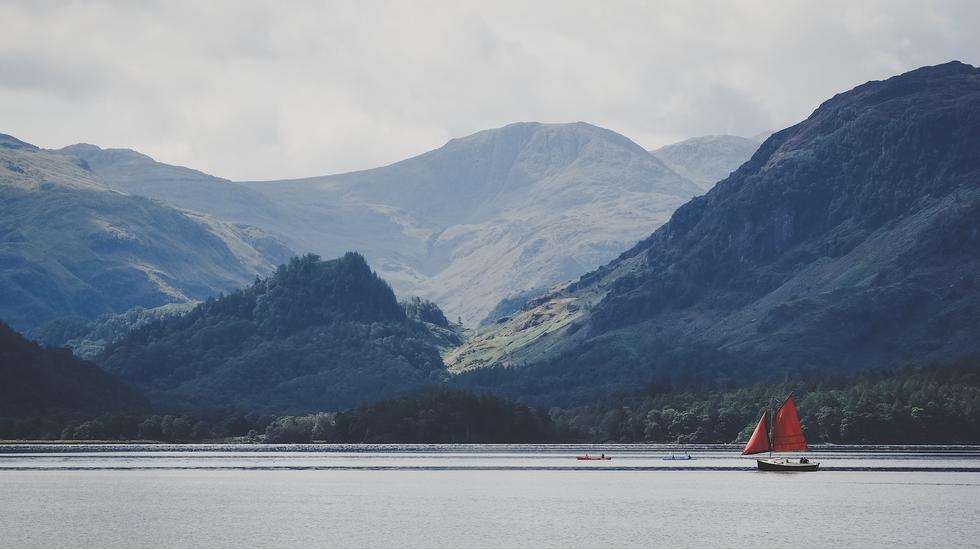 Hankering Hankering after an escape from the everyday humdrum, we're journeying to crumbling castles, underwater cities and haunted islands guaranteed to whisk every wild imagination beyond the worldly map.

Pilgrimaging to sites steeped in mythological promise is far from your run-of-the-mill journey. As myths and legends become entwined with the identity of the landscape, each evolving with every retelling, the destination in question is elevated above the ordinary. Hankering after an escape from the everyday humdrum, we're journeying to places that take our wild imaginations beyond the worldly map.

You may think this particular genre of discovery has left no stone unturned, but the tapestry of England's cultural heritage is so intricately embroidered that some threads weave through unnoticed. We're spotlighting the familiar figures, local legends and little-known folktales that reveal the lost, the famous and the forgotten versions of England.

Scurry through this mossy chasm (known as Lud's Church) and, legend says, you'll find yourself ensconced in Robin Hood's Stride, the heroic outlaw's secret hideaway. Swathes of sites across England tout connections to the skilled archer, but few boast such ethereal splendour as Lud's Church.

Daylight stipples the damp, mossy veneer on the cathedral-like passageways, keeping the crevice cool on even the hottest summer days. Later in the year, the tumbling, autumnal mists conjure up an atmosphere entirely appropriate for a mystical quest.

If you believe the stories, the cleft was forged by the devil's fingernail as he clawed away at the Earth's surface, carving out this sacred corridor. Nestled deep in the heart of the Peak District's Black Forest, it's hardly surprising that this verdant temple once hosted sacred Druid rituals and clandestine Lollard ceremonies.

Follow the course of the River Dane that tumbles through this ancient woodland, visit the Queen's Chair and the Winking Man's Rock, then stop off at quintessentially English pubs you'll find flecked across the wooded valley along the way.

The adventures of King Arthur and Merlin are, perhaps, the most famous and widely celebrated myths in the English canon. Such tales have brought us references to Arthur's court at Camelot and his resting place at Glastonbury Abbey, but it was the ancient chronicler, Geoffrey of Monmouth, who provided the first written mention of Tintagel's role in Arthur's magical conception.

Arthur's father, Uther Pendragon, had fallen in love with Duke Gorlois of Cornwall's wife, Igraine. One evening he chased her back to Tintagel where, with the assistance of Merlin's seducing enchantments, Arthur was conceived.

Historians and archaeologists have since contradicted such claims, but the rugged and dramatic rock formations carved out over centuries by unrelenting waves make it easy to understand why Geoffrey of Monmouth chose it. It is the Arthurian associations that are the supposed impetus behind Richard, Earl of Cornwall, building Tintagel Castle on the site in the 1230s, the walls of which now stand as romantic ruins.

If you're feeling adventurous, you can scamper down the craggy face and discover a cavern on the west side of Haven Beach, known as Merlin's Cave.

If you look closely, you might just pick out three grooves on the slopes of Penshaw Hill. It's said that a medieval dragon, known locally as the "Lambton Worm", wrapped its long body around the hill three times, leaving these enduring marks.

One day, after years of lurking in its lair in the River Wear, the Worm emerged in a monstrous form and terrorised the Lambton estate, laying waste to everything and everyone in its path. John Lambton (heir to the estate) sought the help of an old witch, who provided him with the spiked armour and magic sword he needed to defeat the creature. But her help came at a price: she instructed him to kill the first person he encounters after killing the beast, or else his family would suffer violent deaths for nine generations. When John successfully slayed the Worm that had coiled itself around Penshaw Hill, he encountered his father, but refused to kill him. The curse held true for the next three generations of Lambton men.

Climb to the top of Penshaw Hill to the Grecian-style monument (erected for one of John Lambton's descendants) and, on a clear day, you can catch a glimpse of the Cheviot Hills 80km to the north and the magnificent Durham Castle and Cathedral (a Unesco World Heritage Site) to the south.

Places to visit nearby: Durham Castle and Cathedral; Durham City; WWT Washington Wetland Centre; Roker and Seaburn beaches; the Angel of the North.

St Herbert's is the largest of the Derwent Water islands in the Lake District, home to Wordsworth, Coleridge and, of course, Beatrix Potter - St Herbert's, in particular, provided the inspiration for the fictional Owl Island in The Tale of Squirrel Nutkin.

St Herbert's was named after the saint that brought Christianity to the region in 685 CE. The island became his hermitage and his cell is still visible in the undergrowth. It is said that St Herbert's ghost still wanders the island at night. Beware; both visitors and locals have reported ghostly sightings.

You may recognise the Islands of Derwent Water from the 2016 Swallows & Amazons adaptation that was filmed there. Recreate your own nautical adventure by hiring a canoe from one of the marinas and enjoy some island-hopping. Alternatively, visit one of Ruskin's favourite viewpoints, Friar's Craig, and gaze over St Herbert's island from the mainland.

Be sure to look out for Tizzie-Whizies - they're rare and legendary creatures in these parts. With the body of a hedgehog, wings of a dragonfly, antennae of a bee and the tail of a squirrel, they're instantly recognisable.

Following in the footsteps of others doesn't always mean treading the same path; in fact, we thoroughly recommend you don't when visiting Lake Semerwater. For plunged to the very depths of the lake is where you'll find its lost city.

According to local legend, an old man visited the town, knocking on every door in search of food and water. Each time, he was turned away. He came to a hovel just outside the town, where a couple welcomed him in and supplied him with provisions. To punish the uncharitable townsfolk, the old man (often referred to as a disguised angel) chanted a curse. As soon as the words left his lips, every house in the town began to flood, leaving only the hospitable hovel untouched. An eerie twist to this tale came in the 30s when remains of an ancient settlement was found at the bottom of the lake.

Rather than waiting for a glimpse of the world below the surface, you can skim across the water while enjoying a range of water activities or traverse the surrounding countryside in which you'll pass by beautiful rivers, becks, Horton Gill Force waterfall, and the Semer Water Nature Reserve.

It's unsurprising that this lake, cradled in a sequestered fold of the undulating Yorkshire Dales, became the subject of a number of J.M.W. Turner's sketches and paintings.

Whether you go in search of the lost city, to trace Turner's brushstrokes or to witness the cinematic vistas, Lake Semerwater is unlikely to disappoint.