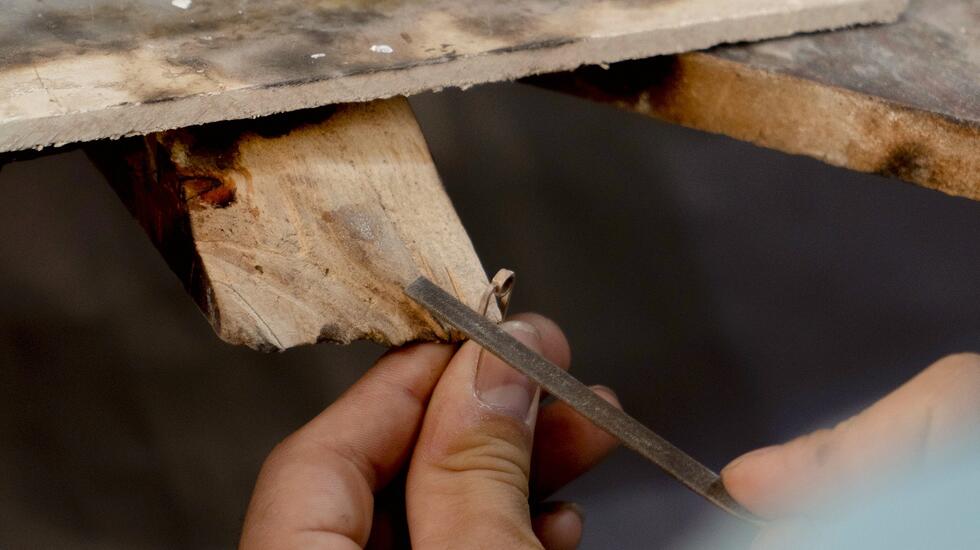 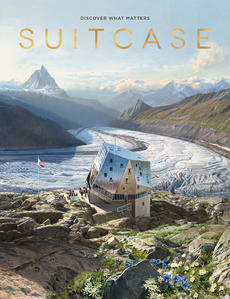 Scrolling Scrolling through the images of an Afghan jewellery workshop sent over to us, a shot of lapis lazuli fragments gives me pause. The fragments are copious, and irregular in size. A few have been roughly shaped into raindrop pendants. Other shards are untouched; uncut. The stone's vibrant blue hue has yet to be brought out by polishing - it's there, but dampened by dust.

In another picture, delicate blue studs, ringed with silver, are attached to earring hoops; in a third, a bearded craftsman, smiling softly like the Mona Lisa, stares out. The sleeves of his shirt are pushed up his forearms, the fabric a few shades darker than the stones. It's a glimpse into a destination I can't visit, and a story of an old craft surviving against the odds.

Afghanistan has been home to a rich jewellery trade for centuries; from Badakhshan to Kandahar, the country's soils are rich with precious metals and gems. Its lapis lazuli was once the envy of Egyptian pharaohs, and its ancient bejewelled treasures - necklaces, earrings and headdresses - have been showcased in critically acclaimed exhibitions across the globe. But the fall of Afghanistan to the Taliban, following the US-led withdrawal of international forces in August 2021, left the country in an economic and humanitarian crisis, and its jewellers fearing for the future.

A jeweller that ISHAKR works with, left, and pre-cut lapis lazuli.

Prior to this, many of the country's artisans were assisted by not-for-profit organisations offering educational, economic and employment support. After the regime change, some have paused programmes (or at least stopped publicising their involvement).

The team behind social enterprise company ISHKAR initially stopped working with Afghan jewellers. The company, which aims to open up connections with territories considered isolated and unreachable through travel and trade, feared their contacts would be endangered by their connection to the platform, and were wary that trade may directly fund Taliban rule via taxation, as well as potentially legitimising the new government. But, having lived in Afghanistan for three years before setting up the platform, when he worked with ISHKAR's partner organisation Turquoise Mountain Foundation, co-founder Edmund Le Brun noted that not engaging with artisans might instil equally damaging outcomes.

"Ultimately, we feel it would be more damaging for the people of Afghanistan to pause our work than to continue," he says. "The people of Afghanistan are facing a horrifying economic, cultural and psychological crisis. We have the power to carve out a positive impact that will make a real difference to individuals' lives." In the weighing up of potential dangers, ISHKAR landed on the side of hope. Artisans would face severe economic consequences without a market for their work, and cutting ties could also leave them feeling betrayed, ostracised and abandoned, eroding further the delicate chains that connected the country to the wider world.

Crafting a piece, left, and one of the jewellers.

"Jewellery making is not only my passion but also allows me to support my family and my apprentices financially," one jeweller who works with ISHKAR told us. "In making one piece of jewellery, there will be around five people involved, and those five people are all supporting their families." For obvious reasons, jewellers in the country have agreed to talk on the condition of anonymity.

Necklaces, rings and earrings sold on ISHKAR's website are all handmade, and a percentage of every purchase also goes towards ISHKAR's long-term partner, the Turquoise Mountain Foundation, which provides technical training for the artisans. The jewellers they work with have inherited a tradition of craftsmanship long-loved. "Hand making jewellery is the tradition of our ancestors. We must keep our culture alive," explains another jeweller, who teaches students the craft. "I feel alive when I teach jewellery to my students because in the future they will be capable of supporting themselves and others."

Moments from the workshop.

Le Brun has found that some feared outcomes haven't materialised; others haven't been as severe as they'd expected. "Artisans do not appear to be threatened by working with us," he says, "[and they] do not appear to have been endangered by working with us. The Taliban are encouraging trade, and crafts are one of the few types of work that the Taliban allow women to do." For obvious reasons, the platform continues to monitor the situation.

There's something comforting in the continuation of a craft; long-practised, the techniques required to produce something of beauty become a ritual, repeated over and over. A certain twist of the wrist to bend a thin hair of silver just so; a slow-paced movement that only works if you have knowledge of what is to come before you've finished the initial step. Each silver link worked into a necklace chain provides a hold on the past, and a promise to the future. Poignant, when the present feels unmoored from both.

Many of the Afghan pieces sold through ISHKAR use lapis lazuli stone, refined and perfected into something far-distant from the colourful shards seen in the photo taken in an anonymous workshop somewhere in Afghanistan. The brilliant stones likely hail from the gem-rich Kokcha River valley, north of Kabul, where bold colour is mined from ochre soils. "We call lapis a lucky stone as it brings fortune to people," one jeweller explains. In the world of gemology, the striking blue stone is sometimes also suggested to have healing powers.