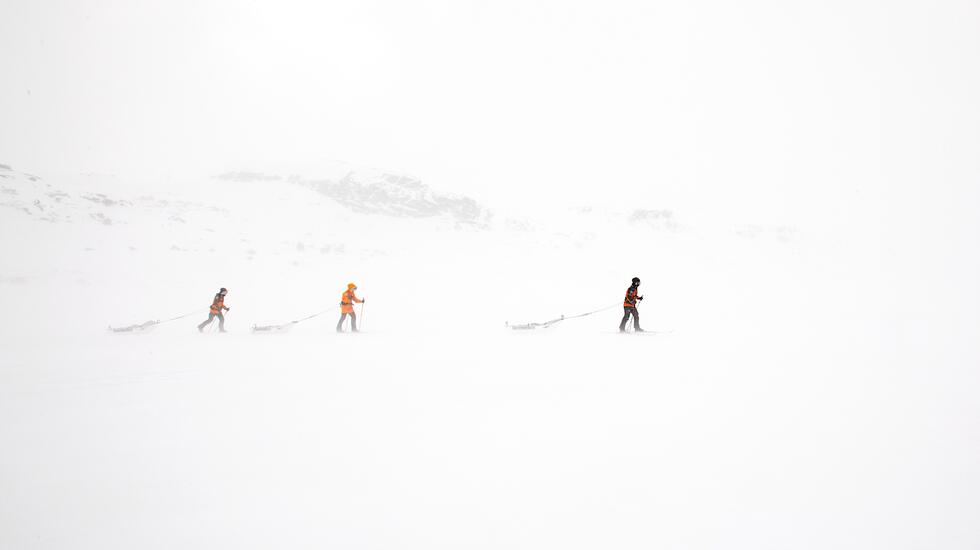 Antarctica Antarctica - the world's southernmost continent and largest desert - is among one of the harshest environments on Earth. Few other destinations are as breathtakingly beautiful - nor push the boundaries of human endurance further. This December, explorer Wendy Searle will attempt to become the fastest-ever woman to ski solo from the Antarctic coast to the South Pole - considered one of the greatest feats for thrill-seeking adventurers.

Searle, who is the polar guide and expedition lead of pioneering British group Shackleton - which offers transformative treks in some of the world's most extreme settings - previously conquered the route back in 2020. But this time things are different. In order to become the new record-holder, she will need to cover the 1,150km distance in just 38 days and 23 hours - shaving five days off her previous finish.

An Antarctic snapshot, left, and Searle in the snow.

During the journey, Searle, who'll monitor her progress through satellite devices, will need to successfully smash a set distance each day. That, however, is the easy part. As she submerges into sub-zero temperatures, staying fuelled and controlling her body heat will be the biggest challenges she faces. In her pulk (sled) will be just one set of thermals, salopettes, a spare pair of socks and a down jacket - a shockingly small amount for a five-week trip. With the countdown on, we caught up with her to uncover what it's like to prepare for high altitudes and punishing winds, and where she finds the mental and physical strength to persevere in darker hours.

She who dares: in conversation with Arctic adventurer Wendy Searle

How did you become an adventurer?

I come from an average background. I've never considered myself gifted at sport (minus the time I made it onto the B team for netball - on one occasion). But the foundations were built during my childhood, when my family and I went on frequent walking holidays - something I didn't see as the privilege it was at the time. In my adult life, I developed an appreciation for outdoor pursuits - starting with marathons and quickly turning to fell running. That's when I met a brilliant team who were planning to cross the Antarctic. When I became their expedition manager, I became completely obsessed with polar history. After years of planning, I was able to adventure to the Antarctic myself.

I had one disastrous trip on the slopes when I was at university, which I put down to the lack of teaching. In 2018, I completed a two-week course in polar travel, which covered everything from skiing to camping on snow. There's a lot to it; the conditions offer multilayered danger and if you don't know what you're doing, there's a serious risk of injury. I fell over every single day and convinced myself I would never ski again, but it was too late, I had already committed to the Antarctic journey.

Tell us about your most exhilarating adventure so far.

I'm lucky that in the last few years, I've been on some pretty exciting adventures. Stepping out of the plane and into the Antarctic for the first time is definitely up there - it was a dream come true. Another notable journey was a team trip across the Greenland ice sheet in 2018, during which we were momentarily stranded in a piteraq storm. Piteraq is a Greenlandic word that roughly translates as "that which will do you harm", meaning no one could help us. It taught me a lot and definitely sticks with me.

A Shackelton expedition group, left, and a smiling Searle.

What was the motivation behind this challenge?

I want to show others that it's never too late to go for it. I was in my late-30s when I first ventured down this icy road. It's often said that if your passions are not decided by your late-teens, they are somehow not legitimate - something I'm determined to prove wrong.

I also want to revisit Antarctica. It's an extraordinary place. With no full-time residents nor time zones, it truly exists on its own terms.

What makes Antarctica such a demanding environment?

Antarctica is a place of extremes. Its vast landscape and lack of logistics make human life become minuscule. The isolation is intense at times - it could be that the closest person at any given time is in the International Space Station. I often reflect on the early days of polar explorers and appreciate how far we've come since then: the kit is advanced; I can communicate with my children at the end of each day. Accomplishing an expedition in a place of such uncertainty is something I believe to be quite remarkable.

Talk to us about your training.

I live in Wales, which is an ideal - and stunning - place to train. I spend a lot of time in the Brecon Beacons; stomping around the bogs in the rain is great for endurance. I also train near my house, in the Wye Valley, where I use weights, do long-distance running and tyre-hauling sessions to build my overall strength. I'm currently trying to put on body fat before the journey ahead, which has been challenging, but the support of the Shackleton team has helped.

How do you find the mental strength to push yourself to your limits?

We, as humans, don't push ourselves to the limits of what the body is capable of enduring. I try to keep this science in mind when I'm having a bad day. Telling myself that I can dig deeper always helps, but often it can be as simple as putting one ski in front of the other. I've accepted that there will be highs and lows. Fuelling myself with the right snacks and knowing that I am capable of fixing my own kit helps. Ultimately, no one is going to fly to Antarctica and rescue me; I have to manage things on my own. On my last venture, I was pleasantly surprised at how resourceful I was at the point of crisis - positive learnings that I'll carry with me.

An essential item you're taking?

Everything I'm taking is essential; there is no room in my pulk for any luxuries. My most treasured piece of kit is my tent. It's a welcome sanctuary after a long day out in the elements. It's only a light material and a few poles, but it's quite literally the difference between life and death.

And lastly, what's next for Wendy Searle?

In February, I'll be heading to Norway - the place where I first started all of this - so it will feel special to return. As for my next adventure, let me get back to you after I've completed this one.