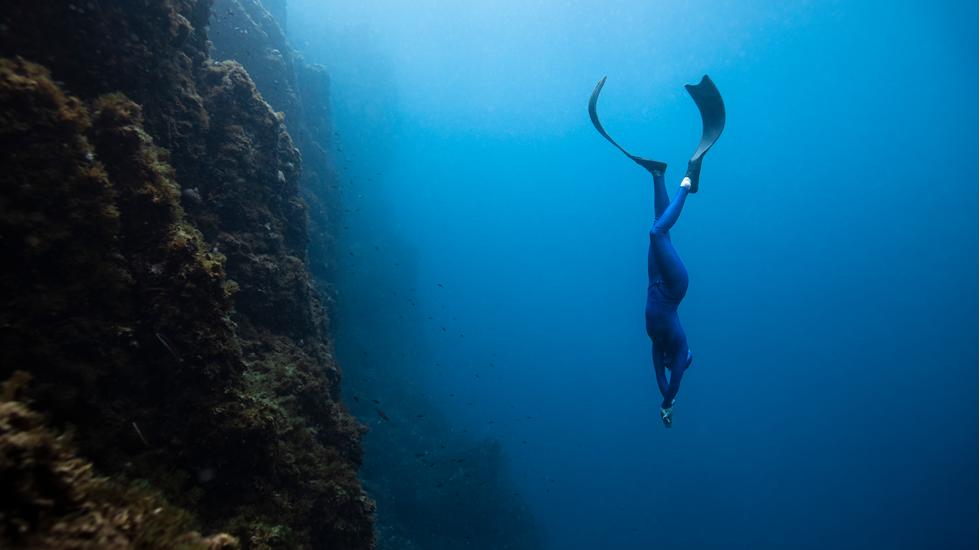 How How long can you hold your breath under water? Two minutes? Three, at a push? When free diver Julie Gautier goes down into the deep, she won't draw breath for up to 10 minutes, allowing her to descend to depths of 70m and beyond. Diving so far and for so long should, even by some scientific accounts, be impossible, but she does it, again and again.

You could say Gautier was born a free diver. Raised on the tropical island of La Réunion, she first practised controlling her breathing and exploring underwater landscapes on one lungful while spearfishing with her father in the Indian Ocean. By 18, she was already competing worldwide, breaking new records in this extreme and dangerous sport.

Natural talent alone doesn't make you a free diver. The discipline requires persistence, perseverance and precision. Divers must overcome learnt behaviours in order to unlock their full breathing capacity, adapting to intense physiological stresses and mentally disengaging with primitive fears while challenging the far-flung edges of their physical ability. It takes grit and resilience to dive into these, literally, breathtaking environments.

Today, Gautier is still stretching the boundaries of human endurance, but pairs the physical feats with another talent: capturing the otherworldly beauty of her underwater experiences on film. Working with her partner and fellow diver Guillaume Néry, the TAG Heuer ambassador produces striking shorts documenting their dives in jaw-dropping locations. It's hard enough reaching such depths without scuba equipment, but this water baby does it while also filming and directing. Oh, and did we mention that she sometimes performs ethereal choreography 30m down, too?

We spoke to Julie about unlocking creativity through physical extremes, finding freedom on the borders of possibility and how her TAG Heuer Aquaracer is the only piece of equipment she needs when heading into the big blue.

When did you first discover your love of free diving?

I discovered it naturally, on the beach where I grew up. I lived on La Réunion until I was 25. I was practically born in water. The island has shaped the person I am.

My father was an underwater hunter and he introduced me to diving. You need to spend a lot of time in the sea to prepare your body physically for the experience - there's no better way to learn than from the element itself. It's the same with your mentality. The water teaches you to listen and to slow down.

How did you master the specialised breathwork needed to free dive?

It took a lot of body- and thoracic cage-stretching to succeed at it, both of which improve your lung capacity. You have to relearn how to breathe - how to really breathe, which isn't natural, unless you're a baby or a child.

What is your favourite dive spot?

I love diving in Barracuda Lake in the Philippines, where we shot the movie One Breath Around the World. The lake's water is cold on the surface, but gets warmer and warmer as you sink deeper. There's no life in the lake, either. It's like you're on a different planet. I could spend days exploring the amazing rock formations.

Alternatively, there's Yonaguni-jima, the westernmost island of Japan. It's a tiny fisherman's island in the middle of the ocean. There are no tourists, bar a few Japanese visitors. Just offshore from the island lies Yonaguni-jima Kaitei Chikei, a mysterious underwater rock formation. It's totally natural, although some people believe it's a submerged, man-made structure dating back thousands of years.

What has been your most exhilarating diving experience?

When I was shooting Mary Magdalene [Gautier was Rooney Mara's stunt double in the 2018 film, which starred Joaquim Phoenix], I had to wear a heavy, bulky costume. They asked me to let myself sink for as long as I could. I found myself in these clothes, in this character, letting myself sink… and sink… and sink. It gave me a sensation of fullness and abandon that I've not felt since. I could totally let go.

What is your most essential item of kit when free diving?

My watch. Most free-diving watches are huge and awkward, but my TAG Heuer Aquaracer is very ergonomic. Its lightness, its small dials and its shape help me to focus on sensations, which is important in free diving. When I do need it, it's right there, and it brings me back into real time. That's a vital part of free diving because I need to keep track of my time underwater and have a specific time resting.

Can you tell us about one situation that has really tested your resilience?

I think it was probably when I was diving off Cocos Island, in the Pacific. Jurassic Park was shot there. When I was in the water, it felt just like being in the film. The fish are huge, the currents strong and there's a high chance of meeting a grey reef or hammerhead shark. You're so far from everything that anything could happen to you.

Any diving dreams for the future?

I would love to dive with Japanese amas [female free divers, or "sea woman", famous for collecting pearls and seafood] and spend time learning and fishing with them. I feel like we have the same kind of life philosophy. I named my latest film, AMA, after them.

What's the biggest challenge you've faced in your career?

When I stopped competing, I had to find a new path. Even though I didn't want to continue on the competitive path, it was so hard to give it up because I felt I still had untapped potential. I wanted to go further, but I didn't realise that I was looking for increased creativity in my free diving, rather than deeper waters. I had to turn the page and stop competing completely for that realisation to materialise.

How do you find the mental strength to push yourself to your limits?

I always try to be innovative and purposeful. I want to bring a fresh perspective to everything I do, whether I'm in front of or behind the camera. This translates into my everyday life, too - I try to live in harmony with nature. I try to be self-sufficient and remain connected to natural rhythms, decreasing my impact on the environment.

Your job brings you face to face with marine pollution. How can we treat our oceans better?

It's amazing that my job is to capture people's attention with beautiful images of the ocean but what's crucial is that I can lead them towards changing their behaviour. I'm committed to helping NGOs such as The SeaCleaners share their message. The only way for me to do that is by doing what I do best - telling stories that move people and nudge them towards taking positive action.

Finally, what's in your SUITCASE?

A bikini, my TAG Heuer Aquaracer, a mask and my water bottle are the things I always have with me. I've owned the bottle for years - I'd rather die of thirst than buy a single-use plastic one.

The TAG Heuer Aquaracer is the ultimate tool watch. Constructed with heavy-duty materials, it pushes the boundaries of luxury timekeeping. Find your precise fit here.