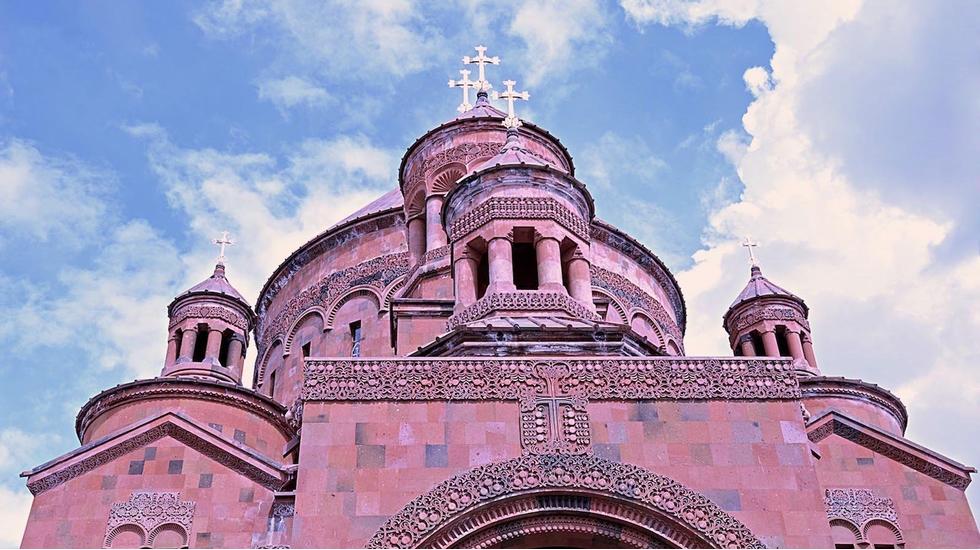 Armenia Armenia is a small, mountainous country nestled between Turkey, Georgia, Azerbaijan and Iran. Many people would struggle to locate this ancient land on a map, let alone know anything about its rich history, culture, landscapes and people. It will no doubt come as a surprise then, that one of the most famous families in the western world, the Kardashians, are half Armenian - like me.

The Armenian diaspora numbers somewhere between six and ten million. Following the 1915 Armenian Genocide its citizens spread all over the globe and, while I was born in Britain, my mother grew up in Lebanon and my grandmother in Syria. Until a few weeks ago neither my mother, my grandmother nor even my great-grandmother had ever set foot on Armenian soil; it was a mythical place, one that we only experienced through photographs, nursery rhymes and food.

As a small nation at the crossroads of Europe and Asia, Armenia has been ruled by Arabs, Greeks, Mongols, Persians and Romans. At one point Armenia was also one of the great powers, with an empire that stretched all the way to Rome. But the country suffered at the hands of the Ottomans and during the 20th century was under soviet rule. Modern Armenia has only enjoyed independence since 1991; a baby in real terms, getting to grips with its newfound autonomy. That said, while contemporary Armenia is young, it is also an ancient country.

The capital, Yerevan, was founded in 782 BC and today is a pink city full of roses. Buildings are nearly all constructed out of volcanic tufa stone, a warm shade of coral, and wild roses sprout up on every street corner. I was half expecting to be met with an abundance of pomegranates - a national symbol - but it is mulberry trees that line the streets in June. Far in the distance, the biblical Mount Ararat, the summit of which Noah's ark rested after the flood, looks calmly over the city.

Despite now being a landlocked country, Yerevan is full of water, with decorative fountains appearing in the centre of the dozens of squares that are spread across the city sourced with Armenia's own spring water. My favourite is decorated with the signs of the zodiac in Charles Aznavour square, named after the French-Armenian singer. Among others is Swan Lake, which gained notoriety when Kanye West fell in it during an impromptu performance held when the Kardashians visited the city.

Without a metro system or reliable public transport, travelling by foot is the norm, but taxis are favourable in the sweltering summer heat. All I wanted to do in Yerevan was buy a taraz (a traditional Armenian dress) and eat jingalov hats, a type of flatbread stuffed with seven herbs native to Armenia, which originated from the region known outside Armenia as Nagorno Karabakh - a contested enclave inside Azerbaijan. We easily found the bread in a café on Teryan Street thanks to a recommendation from Tatevik, who led the tours we took outside Yerevan with the wonderful Hyur Service. The dress was a little harder to find. After all but giving up, I caught glimpse of a red gown hanging from a stall at the Vernissage market on our penultimate day in Yerevan. The market is a huge open-air outlet full of carpets, dolls and paintings. Pomegranates can be seen on every stall and all the wares on sale exude the spirit of Armenia.

While Yerevan is undeniably charming, it is beyond the capital that we discovered the real beauty of Armenia. Not far outside is Etchmiadzin, the oldest cathedral in the world. We also visited St Hripsime church where we learnt about the namesake saint, one of 35 Roman Christian virgins who had fled pagan Rome and settled in Armenia. Tiridates III, king at the time, who was likely Zoroastrianism in account of recent Persian invasion, was struck by Hripsime's beauty and wanted to marry her. She refused and the king had all of the women killed. Legend has it that after this rejection the king suffered from madness and turned into a pig. He was then saved by Gregory the Illuminator and made Christianity the state religion in 301 AD. It is these tales that make up the rich tapestry of this little-visited country.

Meanwhile, high in the mountains, Geghard monastery is breathtaking. Founded in the 4th century at the site of a sacred spring inside a cave, it is partially carved out of a mountain and feels like a mythical building from a film. On our visit men played the duduk, a traditional Armenian flute at the bottom of the road leading up to the monastery, while locals sold dried fruit, jam and gata (a sweet bread).

On our way back from Geghard to Yerevan we stopped in the countryside to see lavash (a soft, thin unleavened bread) being made, which we ate with fresh herbs, halva (confectionary made out of sesame and sunflower seeds) and cheese. So simple, yet so delicious.

On what was probably the sunniest day of our trip, we visited the last remaining pagan temple, Garni, dedicated to the sun god Mihr. Beside ancient places, we also discovered many gems inside the galleries of Yerevan. A favourite was the Sergei Parajanov Museum, full of weird and wonderful artworks by the late artist. The house museum was full to burst with whimsical collages that juxtapose religious themes, Armenian history and Parajanov's own films.

Thanks to Instagram, I managed to connect with in-the-know locals while I was in Yerevan who took me out in the evening, hitting up nightspots like trendy Simona bar. We ate Armenian food at restaurants by the Cascade and Cafesjian Centre for the Arts - a giant stairway that leads up to dozens of contemporary art galleries and is surrounded by sculpture at every level. On our final day we climbed to the top of the Cascade where we were able to overlook the whole of Yerevan with the mountains framing the city in the background like a photograph.

So, now you know something about Armenia. And hopefully it's not just about the Kardashians.