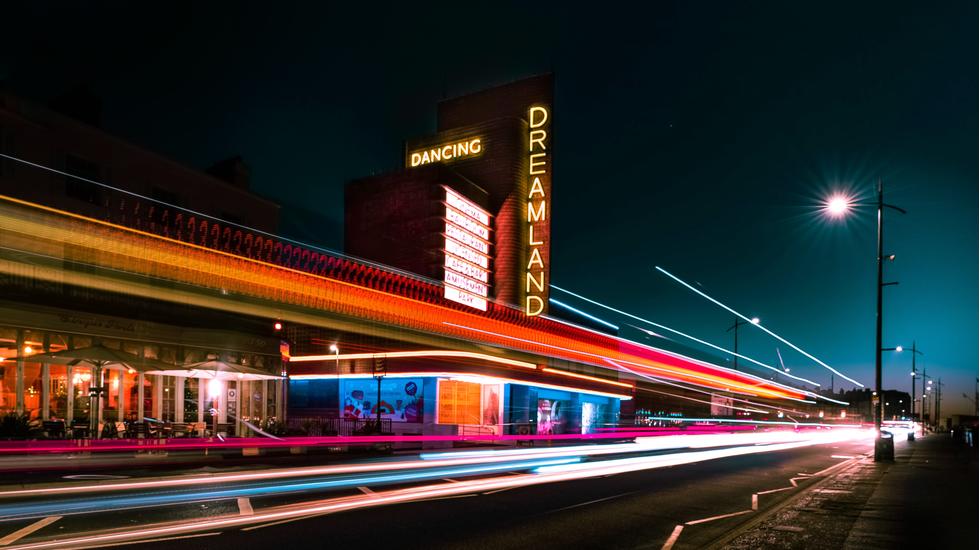 Nowhere Nowhere in Britain is more than 113km away from the sea. From Margate to Blackpool, the British seaside has been a port of call for holidaymakers since the advent of the railway in the 1840s. With their promenades and iconic piers, destinations such as Brighton and Scarborough became coastal playgrounds. Yet the British seaside as we know it was shaped several decades and a world war later.

The 30s was an age of mass tourism, healthy living and seaside entertainment. As outdoor culture became fashionable in Britain, so did art deco - the sweeping balconies of its architectural incarnation connected people to the outside world. Art deco's sleek curves and nautical designs came to be the signature style of the British seaside - and this year it has become the subject of a new exhibition, Art Deco by the Sea, at the Sainsbury Centre in Norfolk.

In the interwar years, Brits flocked to seaside resorts. The Midland Hotel in Morecambe welcomed its first guests in 1933. The De La Warr Pavilion opened its doors two years later, on the coast of Bexhill. By 1937, Blackpool was annually playing host to 7 million visitors, who would stroll on the beach, ride wooden rollercoasters at Blackpool Pleasure Beach or playing bingo at the Casino. Across the country, art deco shaped the way people experienced the seaside.

The art deco style first emerged during the 1925 Paris Exposition (better known as the Exposition Internationale des Arts Décoratifs et Industriels Modernes), but it wasn't until 30 years later that the term was popularised, courtesy of English art historian Bevis Hillier. Described as a "total" style that varies from ornamental to clean to eclectic, art deco thrives on organic motifs, sharp geometries and patterns taken from ancient civilisations. It draws on tradition while celebrating machines, movement and speed. "The term has come to be broad enough that everybody knows what you're talking about," says Jon Wright, an architectural historian and heritage consultant with Purcell architects.

The Paris Exposition was a showcase of lavish decorative styles, expensive materials and fine craftsmanship. Such opulence was typically reserved for the elite, that is until architects such as Mallet-Stevens and Le Corbusier demanded architecture that was freed of ornament and built with inexpensive materials. "The trickle-down effect of stylistic reference made it into buildings like cinemas and theatres," says Wright. "People could get a piece of that."

And so, art deco percolated through the middle class. With structures such as the Seaton Carew Bus Station, with its long curves and angular clock tower, the elite-rooted style became associated with pleasure, leisure and escape for all classes. "This was an escapist architecture, says Wright. "It was delivering a fantasy."

Part of that escapism came with a push for the outdoors. After the working-class employees won the right to a week's paid holiday per year in 1938, coastal resorts were revitalised, funfairs were built and transport networks were modernised. "The mid-to-late 1920s are the age of Coco Chanel and the Mediterranean, and this constant idea about the sun being healthy," says Wright. The fascination with the outdoors was palpable in architecture, too. Modernist icons such Le Corbusier or Mies van der Rohe were among the first to consider the relationship between the indoors and outdoors, constantly blurring the boundaries between two.

Lidos are the perfect example of this. In the 30s, 169 open-air swimming pools were built in Britain, making up the largest public infrastructural project the country had ever seen. In 1934, the art deco-style New Brighton Open Air Bathing Pool attracted more than one million swimmers. Four years later came the Saltdean Lido. Flaunting a glass facade, a generous sun deck and an enveloping curve, the Lido was restored in 2018 after narrowly escaping demolition, earning it the nickname of "the seventh wonder of the English seaside".

The English seaside isn't the only one with a penchant for art deco. Take a stroll along Marine Drive, on the southern tip of Mumbai, and you will see an ensemble of low-rise apartments that Salman Rushdie once described as "a glittering art-deco sweep… not even Rome could boast". In 2018, this sweep of waterfront buildings, together with another one along the nearby Oval Maidan park, were recognised by Unesco as part of a World Heritage site. Combined with a few more clusters of buildings with sweeping balconies, sculptural reliefs and Indian flourishes, the city's art-deco collection tops 600 buildings - about 200 short of Miami.

Miami Beach's Art Deco Historic District is home to the world's largest collection of art-deco buildings, which were built between 1923 and 1943. This is a neighbourhood replete with pastel structures, porthole windows, curved metal railings and flags, all duplicated from popular ocean liners once anchored at the Port of Miami.

Mumbai, Miami and New York - with its famous art-deco towers such as the Chrysler Building and Rockefeller Plaza - are among the cities that took the art-deco style and injected their own regional flavours. "The Indian version carries references to earlier Indian traditions," says Wright. "That's not really true of the Miami experience, which is much more flamboyant and colourful and more geometric."

In the UK, after the discovery of Tutankhamun's nearly intact tomb in 1922, Egyptian motifs entered the picture, as can be seen on buildings including Freemasons' Hall in Central London and Temple Works, the former flax mill designed to look like an ancient Egyptian temple in Leeds. Meanwhile, art deco by the sea was directly influenced by nautical streams and transport innovations like ocean liners.

The history of ocean liners began in the 1840s and ran out of steam out in the 60s, with the rise of commercial aviation. In 1867, French novelist Jules Verne sailed on Isambard Kingdom Brunel's SS Great Eastern, an iron sailing steamship regarded as the prototype of the modern ocean liner. "More than a vessel, it is a floating city, part of the country, detached from English soil," he later wrote in his novel, A Floating City, capturing the spirit of the ocean liner that was yet to reach its golden age.

From the 1920s onwards, ocean liners became floating archetypes of maritime engineering and elegant design - opulent temples that sailed across the Atlantic at ever record-breaking speeds. Ships like the SS Normandie captured the design world's attention. Marine Court, an art-deco apartment block in St Leonards-on-Sea, takes direct influence from the Queen Mary, its balconies bearing the same distinctive double curvature as the front of the luxury liner's superstructure.

Over the years, seawater has greatly damaged art-deco architecture on the coast. Naturally, restoring is expensive, but over the past few years, art deco has seen a new wave of appreciation. "Every period of architecture goes through the ugly valley," says Wright, referencing a vulnerable moment in the history of building's popularity, which generally occurs about 40-60 years into its history. "The longer it survives, the more people are going to like it. Art deco is there now, it's beautiful again."