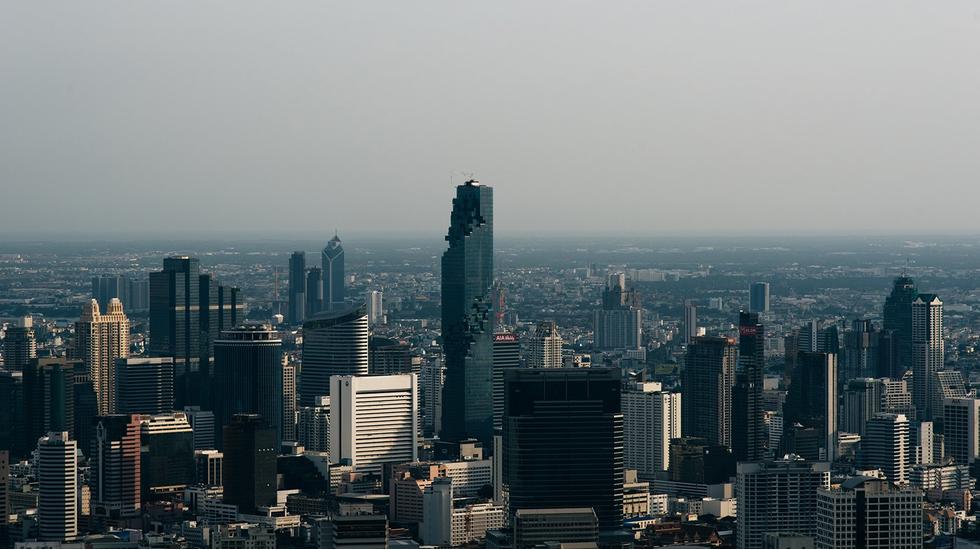 This article appears in Volume 22: The Design Issue.

The hotel is there...

The The taxi driver explains as she pulls into a petrol station. I'm confused. Why are we stopping here? Looking across the road at where she's pointing I can't see any signs of a hotel - there's no driveway, doormen or even signage - just a nondescript grey building hugging the busy road. Before I have time to demand answers she's off, skilfully dodging the traffic of Lan Luang Road while carrying my bulging suitcase. Left with no other choice, I follow. Tuks-tuks swerve, cars honk, motorbikes whizz by and absolutely no one slows down.

My hesitation is confusing the chaotic order of the oncoming traffic in the main road. A man in uniform, sensing that I'm in trouble, scuttles across to help me. He asks, smiling: "Is this your first time in Bangkok?" The answer is obvious. It seems strange that I've never been to Bangkok, which is only a two-and-a-half-hour flight away from where I grew up in Singapore. But through the eyes of a young "clean and green" Singaporean, Thailand's hustle and bustle of pungent street food, teeming markets and jumble of roadside stalls represented a slice of the "old Asia" - disorganised, seedy and intimidating.

Stranger still that I never made it here as a backpacker during my university days in Australia, despite its gap-year staples of Bintang singlets, cheap beer and "exotic" nightlife. Coupled with bouts of political unrest during the Nineties and more recent protests in 2013 and 2014, Bangkok has been overlooked by tourists who bookmark it as a stopover to one of Thailand's hundreds of sun-slicked islands.

However, the city's reputation is changing. There is a new energy pulsating through this tropical metropolis, resulting in a design and culture renaissance that is enticing inventive restaurateurs, world-class bartenders, cool start-ups and co-working spaces to its streets. My hotel, Bangkok Publishing Residence, is a case in point. The property was transformed from a family- owned printing house (Bangkok Publishing, one of the largest in Thailand) into a nostalgic eight-bedroom museum-slash- hotel by Panida "Oum" Tosnaitada, whose grandfather, Vichit Rojamaprapa, founded the business. "I originally wanted to do a publication museum, because the print world is dying - we owned nearly 20 magazines at one point. To make it a sustainable business I added hotel rooms."

It's this kind of thinking by a young generation of Bangkokers that is breathing new life into the capital. Aside from restoring the building, almost all of the furniture at Bangkok Publishing Residence (about 80 per cent) comes from the old factory. A historic wonderland of printings past, vintage magazine covers adorn the walls, leather-bound editions of Bangkok Weekly line the bookshelves, and antique printing blocks and kooky keepsakes sourced from the family archives are scattered throughout. "Everything you see in this hotel is actually an exhibition," Tosnaitada explains. "In the corner is a mock-up of my grandfather's old office, with actual artefacts including everything from his old pens and bottles of liquor to his typewriter and family photos." Showcasing a new kind of approach that goes against the grain - the hotel has no restaurant, pool or hot celebrity chef - at Bangkok Publishing Residence the focus has been on design, heritage and creativity.

Another example of this approach is The Jam Factory, a renovated warehouse concept created by the local "starchitect" Duangrit Bunnag. Having opened four years ago, the former factory compound is now a lifestyle space combining two restaurants, a café, a bookshop, a home décor store and an art gallery dedicated to emerging artists. "It's my passion to renovate old buildings," explains Bunnag. "It can be fascinating to walk through the old structures that give the city a different flavour instead of always building new, ultra-modern high-rises to compete with the western world. We already have something that is good and local." At weekends the green, lofty courtyard buzzes with regular markets and free concerts, giving city-dwellers a much- needed pocket of green space. "That is why this project is so different from other projects. It has been embraced by a lot of communities - people love it here," says Bunnag.

The success of The Jam Factory has caused a ripple through the city. Across the river in the bubbling up-to-the-minute neighbourhood of Charoen Krung, Duangrit Bunnag has opened another warehouse conversion, Warehouse 30, transforming a 4,000-square-metre block of abandoned Second World War-era warehouses into stores, restaurants and art spaces. There's also the newly opened Yelo House, another formerly derelict warehouse that has been remodelled into a hub for creatives of all stripes featuring an art gallery, a restaurant and a café as well as o ces. On the Khlong San side of the river there's LHong 1919, a family-owned rice warehouse and Chinese shrine dating back to the 1800s, which is now a sprawling 6,800sq m riverside complex sporting art and design shops, a couple of restaurants and an open-plan courtyard.

Giving all the above some sti competition is the newly opened ChangChui (which means "sloppy artisan") nightmarket and bustling lifestyle space in the Thonburi district. Conceived by Somchai Songwattana, the CEO and art director of the Thai fashion brand Flynow, the space is a web of 18 buildings, each made from recyclable materials. A disused aeroplane, now an art installation, sits incongrously yet impressively in the middle of a complex that includes a theatre, art spaces, fashion boutiques, co-creative spaces, restaurants and food trucks as well as a community vegetable garden.

However, it's not just been blockbuster openings over the last few years. Look beyond the headlines and you'll see a grittier, more daring scene emerging in the folds of the city. Affordable rent combined with a reasonable cost of living has contributed to the burgeoning creative scene in Bangkok. Unlike in, say, Hong Kong, Singapore or Japan, where the cost of living has priced out the younger generation, in Bangkok it seems that ramshackle ideas can still be turned into realities.

A rickety wooden house in Samsen Soi 2 is testament to this notion. Taken over by the food-loving art director Sittisak "Tommy" Sakornsin, with the simple idea to "bring back the atmosphere of old Bangkok", his restaurant Baanual serves his family's recipes in an unfussy, speakeasy atmosphere. "When I was looking for a place for my concept I knew it had to be an old building. But the minute I saw this place I loved it because it reminded me of my grandma's house," Tommy explains. The restaurant feels like a hybrid of an old family home and a museum. Freshly cut owers and salvaged vintage bric-a-brac - including antique kitchen cabinets, birdcages and clay pots - adorn the space, while Thai folk tunes and sticky-sweet smells ll the air. Guests are seated on two large wooden tables in a shared, family-style set-up and the menu, like the décor, is simple: Thai green curries, tamarind-soaked prawns and stir-fried pork in a sweet and salty shrimp paste.

Whole new areas of the capital have been rejuvenated thanks to hole-in-the-wall pop-ups and out-of-the-box thinkers like Tommy. While once the fashionable crowd migrated towards shiny restaurants and bars in Thonglor and Sukhumvit, unpretentious, more creative openings are now the city's hotspots. On my last night I wander through the gummy heat down Charoen Krung Road, within the bustle of old Bangkok, and spot a raw-looking gallery called Speedy Grandma (the name derives from a local urban legend about a motorbike-riding grandmother). Housed in a converted shophouse, the space is lled with clued-up 20 to 30-somethings drinking beer and getting hand-poked tattoos while eyeing the large blue and pink scribbling animations by the Australian artist Aaron Grech.

Next door the sake is owing at a packed izakaya called Jua. Farther down the road I dine at Eighty Twenty, a restaurant populated by foodies and a beard-stroking crowd keen to sample a menu made of 80 per cent locally sourced ingredients from sustainable suppliers or nearby markets - my fish sauce caramel dessert is worth the trip alone. A couple of doors down I find myself at Tropic City, a colourful new tiki-inspired bar, before hitting my last stop, Teens of Thailand, a serious gin bar that takes me to the fringes of Chinatown. As I sip my Thai tea-infused G&T, thinking that I'd seen all there was to see in this small area, I hear there's yet another slicker-than-your-average "just-opened" bar down the road to check out. I dutifully finish my drink and step back out into the muggy night.