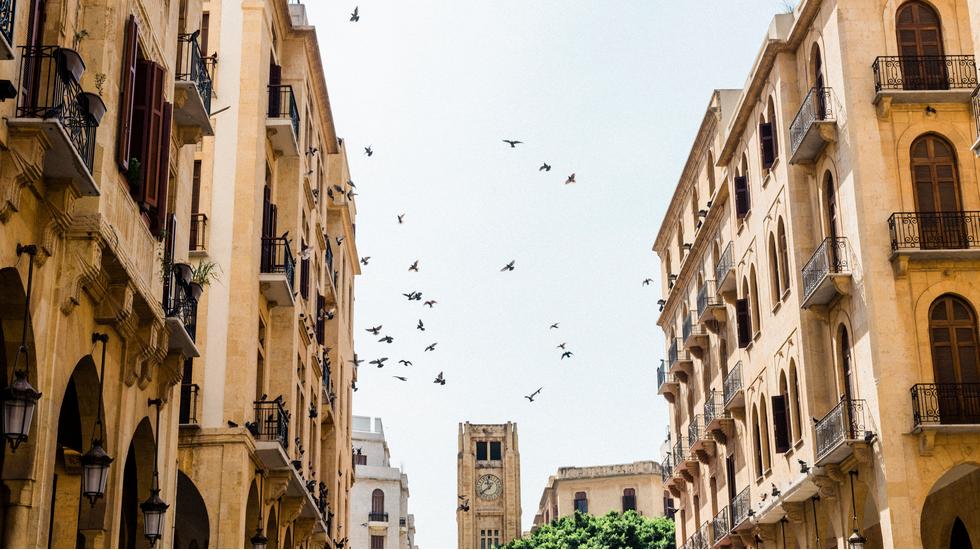 This article appears in Vol. 25: The Pioneer Issue.

As As I propel north through Beirut from the city's airport I pass battered suburbs, ageing apartment blocks and sandstone monoliths. Creeping into the centre, the number of JG Ballard-esque, high-rise developments increases. Like many cities, Beirut is in a state of metamorphosis. Unlike most, the marks of recent ferocious conflict are everywhere. Lebanon's civil war lasted from 1975 until 1990 and left gaping holes in the country's population, mirrored by the pockmarks of sniper bullets and bomb blasts in its tranquil leafy streets.

Today the city is on the move - but for our host, Samer Ghorayeb, the preservation of Beirut's past is a concern. "Fifteen years ago," he tells us, "there were 1,300 protected buildings in this city. Now there are around 200." Government-supported construction companies requisition and develop damaged buildings and empty plots around the city and more often than not the real estate holds infinitely more value without a bombed-out, dilapidated palace atop it.

Samer's own commitment to preservation finds form in Baffa House, a 1940s building that mixes Ottoman and European architectural styles with high ceilings, tiled floors and airy French windows, all bathed in that oh-so-lovely Mediterranean light. Lived in by his grandparents - the house is named for his Italian-immigrant grandfather Antonio Baffa - Samer kickstarted the building's substantial renovation and reopened it as a guesthouse in 2014. For myself and photographer Abbi, both based in Dubai and used to desert-scapes and "executive" skyscrapers, it's disparate bliss.

Baffa House is riding a wave. After years of political uncertainty and security concerns, Beirut's tourist industry and small businesses are once again in bloom. Samer tells us that diaspora Lebanese are returning to the city, some gone as long as three generations and from all corners of the globe. He is cautiously hopeful but the situation is still far from straightforward.

Lebanon's patchwork demographic includes sizeable communities of Palestinians who have settled here since the 1948 Palestine War. There has also been a substantial influx of Syrians into the country since the start of Syria's civil war in 2011. The country's map of ethnic groups and religious denominations - Armenian and Druze, Muslim and Christian - is labyrinthine. Presided over by a Maronite Christian President, a Sunni Muslim Prime Minister and a Shi'i Muslim Head of Parliament, politics are often in deadlock. The Shi'a political organisation Hezbollah garners strong support in certain areas of Lebanon, including Beirut's southern suburbs, providing public services where the government has failed.

As a result Samer's guesthouse retains a healthy dose of nostalgia for the era of his grandparents in the 1950s, 1960s and 1970s, a golden pre-war period of peace. Samer still owns pieces of their well-loved furniture and photos of happy days gone by are enshrined on the walls.

His mother, Diva, makes the breakfast preserves and a dairy-free saffron cake called Sfouf, an accidental vegan masterpiece and an ingenious answer to electricity shortages and unreliable refrigerators during the war. Images by his brother, the photographer Jad Ghorayeb, and his aunt, the renowned contemporary artist Laure Ghorayeb, line the walls. Laure's works also hang in the Sursock Museum, a contemporary Lebanese art museum in the next-door Achrafieh neighbourhood that Abbi and I visit after a Baffa breakfast-of-champions. Born in 1931 and still creating, Laure's frenzied mixed-media collages and stark, surreal paintings confront heritage, war and violence with a dark, humorous energy. In two of her collages she has decorated images of long-gone ancestors and divisive Lebanese politicians with baubles, string, cartoons and childlike scribbles.

This energy is a common theme in modern Beirut, where imagination and a hunger for change spring from a thorny past. At Souk el Tayeb, a Beirut-based co-operative, founder Kamal Mouzawak aims to soothe his fractured nation one meal at a time. Kamal started the Souk el Tayeb farmers' market in 2004 for producers from all of Lebanon's regions, religions and ethnic groups to come together to bring soul food to the city. Nearly 100 producers are now involved in the effort, with all profits going directly back into the production process. Souk el Tayeb's simple message of good food and goodwill has now mushroomed into five guesthouses, seven restaurants and training schemes for migrant workers and underprivileged refugee women.

In a leafy enclave off Mar Mikhael's Armenia Street lies Tawlet Souk el Tayeb, the organisation's Beirut restaurant. There are five menu changes a week here, each cooked by a chef from a different region of the country with their own distinct versions of fattoush, kibbeh and other Lebanese staples. Before a lunch cooked by Nada from Lebanon's eastern Bekaa Valley (where the fertile ground produces much of the country's wine, vegetables and dairy produce), we settle into a light-filled corner with Hana, Tawlet's manager.

"Lebanon has a lot of ideologies when it comes to religion and politics," she tells us. "People are very conflicted. There's always been war and differences that have torn people apart. The only thing we have in common is our food, the produce, the land we create it from." She also quietly reveals that many of Souk el Tayeb's producers and chefs have deeply touching stories related to Lebanon's traumatic past. "It's nice to see that out of all this heartbreak we're creating a sense of home."

Hana joined Souk el Tayeb after an education abroad and an unsatisfying corporate job, following the increasing current of diaspora Lebanese returning to the country. "I felt like I needed to give back - these people represent my family, my ideology… Lebanese are fed up with the plateau, the politics, the economy - the new generation is trying to create more change so that people can have hope." She describes a craving for patriotism from Lebanon's young: "This is why you'll see a lot of places around Beirut hinting towards the 1960s and 1970s - that was the time when Beirut was known as the 'Paris of the Middle East', when it was lively, it was beautiful. My parents and grandparents talk about that time as if it was a dream. We're trying to bring that back."

Leaving Tawlet, we tread west through the city through elegant residential streets to Beirut's downtown, home of Creative Space Beirut (CSB). A social enterprise providing free fashion design education, CSB is the brainchild of Sarah Hermez. Born to Lebanese parents, Sarah grew up in Kuwait and studied at New York's Parsons School of Design and the Eugene Lang College of Liberal Arts. "I wanted to come back to Lebanon to give something back - and to combine my passions for social justice and fashion," she explains. "There's no quality design education here and at CSB we believe that fostering talent helps a country to grow."

With the support of friends and her co-founder Caroline Simonelli (Sarah's professor from Parsons, who still travels from the US to teach courses each year), CSB was born in 2011. Courses include fashion history, concept, design, sewing and business skills, and applications are open to all who reside in the country, be they Lebanese, Palestinian or Syrian. Sarah explains that the school funds itself through grants, tireless networking, events and three in-house brands - CSB Ready To Wear, Second St and Roni Helou, himself a 2016 graduate who'll be showcasing his designs at London's Somerset House in February 2019 as part of the International Fashion Showcase.

CSB has recently relocated to donated premises in the downtown Beirut Souks, bringing life to a largely empty modern development. Three years of intense study and a small number of pupils has formed a close-knit group and many graduates return to work alongside the students when they can.

We gatecrash a late lunch where graduate Ahmed and second-year student Najah share their food and enthusiasm. Ahmed is currently working on his own brand - a Japanese-inspired line of T-shirts, abayas and cardigans - while Najah combines her studies with working at a hospice. "I was at work one day," she explains, "and I saw Sarah's TED Talk [a 2015 speech given at TEDxBeirut]. I applied just like that". While they'd like international reach, both students want to remain based in Lebanon. "CSB is a great opportunity," Ahmed says. "It's an incentive to stay at home and work hard." For Najah, Sarah's enthusiasm for Lebanon is an inspiration. "She thought about her home country and how much it needs - the people who are thirsty to express their talents but don't have the means."

The evening sweeps us from CSB along the Beirut Corniche into Hamra, a frenetic neighbourhood in the west of the city. We feast on Beiruti Almaza beer, halloumi and tabbouleh at T'Marbouta, a favoured haunt of students (the American University of Beirut is a few minutes' walk away) hidden behind Hamra's main drag. Then we go underground.

Tucked away in the basement of an unassuming Hamra shopping centre, Metro Al Madina, is a hyper-funked, neon homage to an hedonistic Beirut of decades past. Formed in 2012 by a collective of artists, actors and musicians led by Hisham Jaber, this small-but-mighty venue is a fixed star in Beirut's performance scene. Staples include Hishik Bishik and Bar Farouk, hectic tributes to Egyptian and Lebanese cabaret culture through the decades. There's a constant stream of fresh acts and musical concerts, with "Midnight Metro" resident DJs powering the venue from - you guessed it - midnight on Fridays and Saturdays.

We settle into plush velvet seats for an evening of Koudoud Halabiya, a form of classical-folk music originating from the Syrian city of Aleppo. There's a heavy presence of Beiruti Syrians in the audience bantering back and forth with the group's singer and his ensemble, who play an assortment of traditional string and percussive instruments.

The mood of the room rises and falls as the music swells from celebration to mourning. The catharsis of Koudoud Halabiya to the citizens of a war-torn homeland is potent - and nowhere understands that better than Beirut. Many threads make up the city's story, from European immigrants to its Armenian, Palestinian and Syrian diaspora, war-sick generations to returning expatriates. Yet from this chaos a modern, incomparable Beirut stands proud.