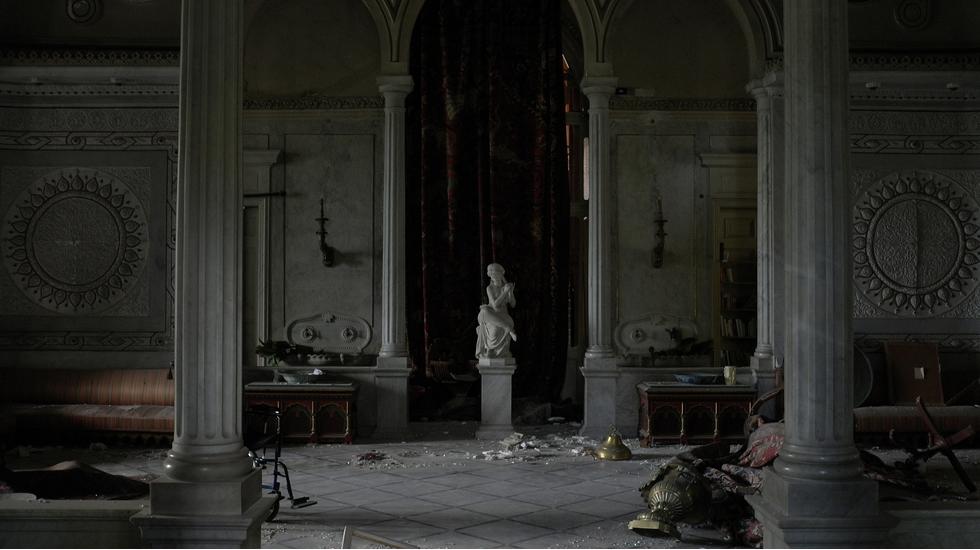 For For much of the 20th century, Beirut flaunted an exotic and hedonistic glamour that drew travellers from the world over. It was a city that conjured notions of opulence, cosmopolitanism, architectural splendour and continental style. So alluring was Beirut that it became affectionately referred to as the "Paris of the Middle East".

In more recent times the capital has become scarred by decades of civil strife, and the push to rebuild and recover from that destruction has been 30 years in the making. That was until 4 August, when a single, catastrophic explosion left causalities not only in the form of human life, but in the shells of Beirut's treasured buildings, structures and dwellings.

Abandoned Dwellings: Display of Systems is a collection of photographs that Lebanese photographer, Gregory Buchakjian shot between 2009 and 2016 as part of a seven-year research project. Through inhabiting and capturing each location, he was able to retell the story of each place and its inhabitants: some had been expelled by wars and conflicts, while others had simply drifted on.

Stumbling upon lost and forgotten objects, such fragments of a Palestinian driver's license, a British Railcard or even a handwritten diary from 1979 with a manual on the art of regular and guerrilla warfare tucked inside it, it became clear that, though these buildings seem tired and dispirited, they were once full of life and, as such, became a portal to a forgotten and vivacious past.

Today, Gregory finds himself surrounded by abandoned, dilapidated and devastated buildings. The effect of the gradual decay of time, as captured in his photos, has been affected on the city's structures in a matter of seconds. Not only have many of the places Gregory photographed been destroyed, but the neglected dwellings featured in his collection now seem more structurally sound than the lifeless buildings faltering in today's Beirut.

The old cliché of a picture telling a thousand words is a notion rendered redundant in light of an explosion that has left both citizens and onlookers speechless. Gregory's photos showcase a version of Beirut that has now been wiped out. The process of restoring Lebanon's capital to its former glory will be a battle hard fought and won.

Could you tell us about the Abandoned Dwellings collection?

I had this overwhelming feeling that the city was changing right in front of me, so I started taking pictures of the buildings, largely, as an act of preserving what was left. It wasn't a project or an initiative; it was just a spontaneous reaction to what was going on. Over the years, it evolved into something more complex: a research project that was eventually published as a book in 2018. In that same year, exhibitions took place at the Sursock Museum in Beirut and at the Villa Empain in Brussels in late 2019.

I should add that the Villa Empain was an abandoned building 20 years ago and the Sursock Museum has been badly damaged in the explosion on 4 August. It's strange how all these things are connected.

In light of the explosion on 4 August, how does it feel knowing that many of the buildings you photographed have now been destroyed?

It's sad to see so many of the abandoned buildings that I photographed are now beyond repair. I haven't seen them all yet, but the ones I have seen are completely ruined. When I documented the buildings for Abandoned Dwellings, they were already abandoned, many of them run down and neglected. Yet the scale of the damage now is even more heartbreaking: thousands of inhabited homes and buildings in good condition have been destroyed. That is the most devastating part of it all.

How does it feel knowing that many of the stories that Beirut's buildings had to tell have been lost?

What initially drove me to do this project was a desire to preserve the memory and the history of Beirut. When I speak about the memory and history of the city, I'm talking about what historians call the microhistory, the little story, the individual story: the story of the local schoolteacher renting a house nearer the school; the bodybuilder who left behind his entire collection of fitness magazines; the story of the woman having a secret affair with an American journalist. All these stories, these dreams of individuals, of families, of ordinary people, they are all so important to the memory of a city because buildings without inhabitants are just walls. They're ghost-towns.

So many of these microhistories are emerging, but on a gigantic scale. One of my students told me about a friend of hers who's a magician. During the explosion, his cards were scattered across the city. He was so distraught at losing part of his livelihood that a group of his friends took to the streets trying to recover the lost cards. It was something very small - the story a magician will not change anything in the Middle East - but it is one of the individual histories that gives Beirut its character and its identity.

Many people have told me that the whole city now looks like my project and, while that is somewhat flattering, it's so much more tragic because when you see the abandoned buildings in my collection, most of them are actually in better condition than any of the buildings in Beirut today.

Seeing the walls of the Sursock Museum in Beirut completely destroyed, a building that had not only been renovated just five years before, but, ironically, had housed my exhibition on ruined and dilapidated buildings, is beyond surrealism. It's tragic.

Lebanon has been working for decades to rebuild after the civil war that ended in 1990. How does it feel knowing that all that hard work has now been undone?

It made me think of the myth of Sisyphus, who will spend eternity pushing a boulder up the hill only to watch it roll back down after every attempt.

In Beirut, the architects, the historians, the artists, the conservationists, all these people, in his or her own way, have been involving themselves in projects and initiatives for years in an attempt to preserve the city's history and heritage. Now, everything has fallen to rubble once more, and we have to start all over again. In the midst of an economic crisis, it'll be an uphill battle. It's exhausting.

The Abandoned Dwellings collection captures a certain beauty in destruction. Yet the images we see of the recent explosion are far from beautiful. As an artist, where would you place that line between destruction that can, on the one hand, amaze us and, on the other, horrify us?

That's a complicated question. After the dreadful 9/11 attack, the German composer, Karlheinz Stockhausen, said it was "the greatest work of art imaginable for the whole cosmos", and, unsurprisingly, he was widely criticised for saying so.

Yet it's true that there is an aesthetic of destruction. So, the image of 9/11, the image of Hiroshima and the image of the Beirut explosion possess something that can be beautiful.

The same goes for ruins: when we see the buildings in Beirut now completely devastated there is something of the sublime - it's entirely paradoxical. For example, two days ago, I was in the library of an ornate Beirut mansion that had lost its roof. It reminded me of the famous picture taken of Holland House in London after the Second World War. It's a photo of a library with all its shelves filled with books and, surrounded by rubble, stand three men perusing the shelves and reading the books under a non-existent roof. On the one hand, it's completely devastating to see a library in this condition, but, on the other, the library in ruins teaches us something.

What do ruins teach us?

Ruins teach us a lesson. They tell us that nothing is permanent, nothing lasts. We don't last as human beings and we don't last as civilisations. Everything, in the end, will disappear.

What is the significance of buildings to a place in relation to its heritage, its history and its people?

The buildings are what gives a place its identity; you can recognise a city almost instantly by its cityscape. The skyline is often the first view we get of a city. Within those cities, each neighbourhood has its distinct streets, its unique shops, its characteristic houses, all of which become the stage for the inhabitants' lives.

Buildings are so profoundly important on a local, international, and individual level, and we must fight hard to protect them.

In light of the recent tragedy, what do your photographs now mean to you?

It's very strange to look at those photographs now. The only thing I know is that if I were to exhibit my photos in the future, I couldn't do it in the way that I did before: they don't have the same meaning. Those photographs show something that was and is no longer. In a way, they're grimly prophetic. In all honesty, I don't have enough distance yet from what's happened to know how quite to interpret my photos today.

All I can tell you is that the shots I've taken in the past few days are much more spectacular than the ones I took for Abandoned Dwellings, and that's down to the sheer magnitude of destruction.

How different would it be if you were just starting your collection now?

I couldn't. I could not start it now. It's something else, something completely different. The difference between what's happening now and what happened in my project is that now we are living its life. The buildings I was photographing were not necessarily damaged: they were in good condition, then they became abandoned and, as a consequence, they fell to ruin, but they were still in good structural order. Now, the buildings became uninhabited because they were ruined - it's the reverse.

If I were surveying and photographing all the abandoned buildings in Beirut today, I couldn't do it alone; I would need an army of people. It took me nine years to survey 700 abandoned buildings. Now there are thousands of buildings that have been shattered in less than 15 seconds.

Wherever there is destruction, there is a need to rebuild. Do you see a future in which Lebanon is able to recover and to rebuild?

I can't think of the future right now; it's too complicated. Instead, I just work and keep busy. We cannot think. If we think, we feel exhausted and overwhelmed and, then, we can't bring ourselves to do anything, so we just take each day at a time.

Tell us about the work you're doing now.

Right now, I'm working at the Sursock Palace, which is one of the largest historical mansions in Beirut and holds a hugely impressive collection of artwork. Since the house was very badly damaged in the explosion, I've been working on the inventory for the paintings in order to see which ones have survived, which are damaged and in need of urgent restoration, and which are totally destroyed.