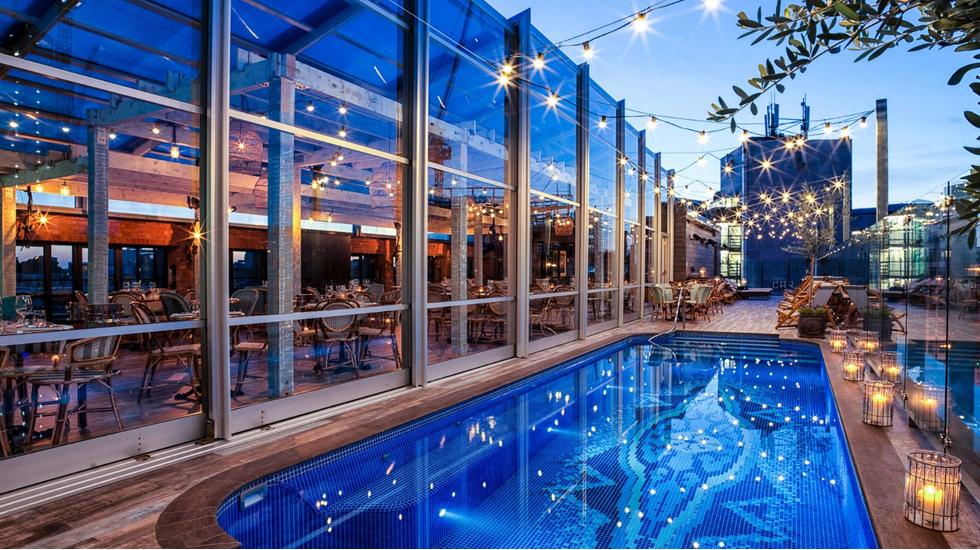 One One of the most hotly anticipated openings of the year, The Curtain opened its black revolving doors to excited murmurings that it was set to rival Shoreditch House as East London's hottest members' club slash hotel. Costing £70 million and taking four years to build, it's the brainchild of Michael Achenbaum - the New York hotelier behind the Gansevoort brand who many hold responsible for putting the Meatpacking district on the map - so it's no surprise that London's cool cats have sat up and taken notice.

Standing six storeys high, it climaxes in an impressive rooftop pool with panoramic views of the city and reaches down into an urban underbelly with a subterranean drinking den. While the name refers to the 16th-century theatre that was once across the road (and allegedly held the first performance of Romeo and Juliet) we like to think of it as a smoke screen for what goes on within. Live music, low lighting and an air of naughtiness which is hard to pin exactly down attracts movers and shakers from film, music and fashion - this place screams exclusivity with a generous dollop of fun, which the membership waiting list suggests a lot of people want in on.

The imposing red-brick building comes with 120 guest rooms, including five suites. In characteristic East London style, a moody colour palette meets exposed-brick walls, freestanding bathtubs, sleek black-and-white bathrooms and a not-so-minibar which will no doubt please the musicians (and any groupies) who check in. Book a loft with a terrace - we've never seen a bigger balcony.

Head up to the rooftop restaurant, Lido, to fill your boots at a buffet spread of fresh pastries, granola and Greek yoghurt. Sourdough, avocado, labneh, quinoa, Manuka honey and every kind of milk imaginable all go without saying. Alternatively, hold out until brunch and spend a merry Sunday sipping bloody Marys and admiring the view.

The basement restaurant, Red Rooster, has received as much hype as the hotel, hopping across the pond as a sibling to the Michelin-starred branch in Harlem, which is headed up by Marcus Samuelsen and counts Barak Obama as a fan. This is a place to see and be seen - fortunate, given that you probably won't be able to hear each other over the live music - so sink into a sumptuous navy-velvet banquette and take in the colourfully quirky surroundings. Southern soul food is order of the day, and it'd be rude not to go for Sammy's chicken 'n' waffles with a side of shrimp 'n' grits. There are sparklers and "Trash Tiki" cocktails, need we say more?

If you're after something a little less lively, Lido (open to guests and members only) offers seasonal Mediterranean fare with a backdrop of floor-to-ceiling windows and twinkling fairy lights. Those who've been busy sampling Shoreditch's effervescent nightlife should make a beeline for Tienda Roosteria (thoughtfully located on the ground floor and open until late) for tacos and probably some more tequila.

There are eight, including a pretty covered courtyard complete with a tree, sultry Billy's Bar and the sound-proofed basement club (the latter two are members only). Alternatively, a roaming mixologist will come to your room and create something bespoke.

Unless your parents used to be in a band and think they've still "got it", you probably shouldn't recommend they stay here when they come to visit.

You're in the thick of Shoreditch with its vibrant restaurants, shops and bars.