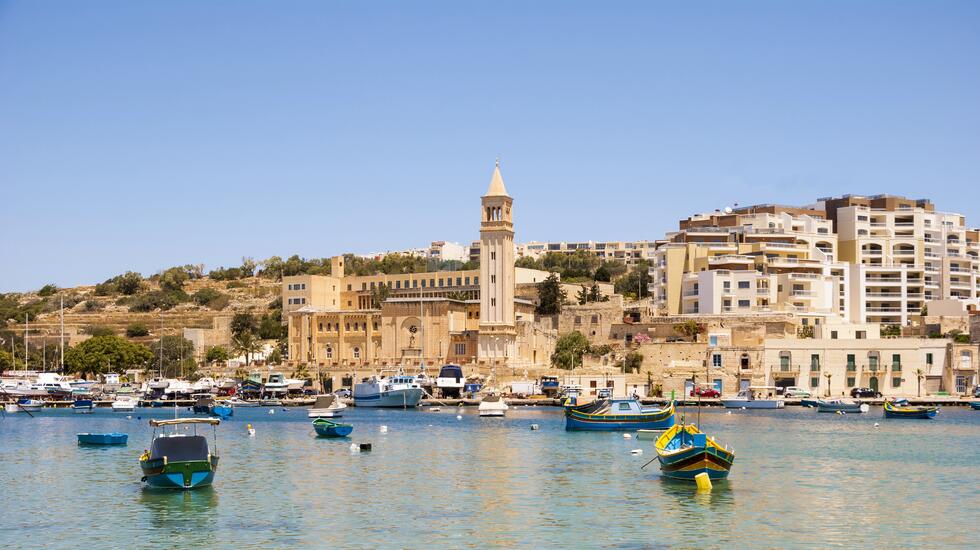 Perched on Malta's southeastern edge, the magical Marsaskala is home to sun-scorched streets, a harbour lined by a happy mish-mash of yellow and apricot villas and a coastline dotted with deserted caves lapped by piercingly blue waters. No wonder it's popular with holidaying Maltese families.

Less than a 30-minute drive from the capital, Valletta, the town has long served as prime territory for long-weekending city types, but its tranquil trails are fast gaining a following among those looking for a hit of sun, history and culture - minus the crowds. Beyond the beautiful beaches, there are plenty of things to see and do. Despite having a tiny population of 12,000 full-time residents, there are a slew of ridiculously cool beach bars, trendy restaurants and smart hotels to explore.

Upper Barrakka Gardens. Okay, okay, they're technically located in Valletta, but the reward of this 15th-century spectacle makes the drive well worth it. Originally utilised as a military sanctuary for knights, the lush oasis has served as a public space since 1800. Pack a picnic, catch up on some reading between the grand 16th-century arches, soak up sweeping views across the Grand Harbour, or simply come to reconnect with nature in a serene environment.

Make Talbot & Bons your base. The converted 400-year-old farmhouse was transformed by designer Carlo Schembri with the help of a band of skilled local craftsmen. The result? A gorgeous getaway. Rooms are painted in arresting shades of sage green and buttercup yellow, with abstract artworks scattered across walls framed by wooden beams and huge windows offering courtyard-facing views. Mornings should be spent enjoying a fresh fruit platter in the stone courtyard, before taking a refreshing dip in the plunge pool.

A tapas menu that fuses flavours from four continents? We're licking our lips just thinking about it. Head to Bongo Nyah for the ultimate feast for the foodie senses, with menu highlights including duck gyozas, Texas ribs, falafel balls, baked Camembert and a buttery chicken curry. Interiors are shabby minus the chic, but that's what makes the food that little bit tastier. Gather your gang around one of the Spanish-tiled tables and get to work on the experimental cocktail menu.

Friday nights were made for Zion. Located in Marsaskala's St Thomas Bay, this boho hangout started out as an evening beach shack some 10 years ago. Today, the all-day affair is known as the best spot in town for flavoursome cocktails, delicious sharing plates and a brilliant playlist. Arrive for 8pm and bag yourself a seat - a wooden pallet with a plush cushion plonked on top - in the palm-tastic courtyard. After one glance at the menu, you'll realise that ordering at least three mains is essential. Our pick? Calamari fritters, crispy chicken nuggets and an enormous wood-fired pepperoni pizza, all washed down with a piña colada. No judgement, please.

That friend who will happily spend an entire day lounging on the beach, but will also have no qualms in unleashing their inner tourist to discover a destination's history.

We've all found ourselves falling victim to dehydrated, puffy and irritated skin, post-flight. Combat the problem by snagging a pack of these 111SKIN Sub-Zero De-puffing Face Masks. Proven to stimulate circulation and enhance radiance, you'll be sporting a glowy look in no time. Pro tip: those needing an extra boost of hydration should leave their mask on for a few extra minutes.

Fly direct from London Gatwick to Malta International Airport, from where it's just a 20-minute drive to Marsaskala.