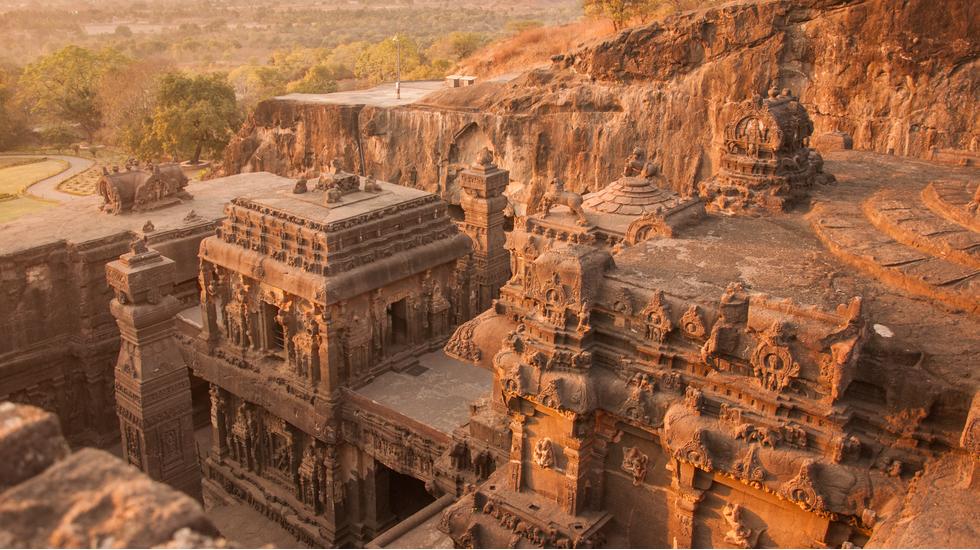 The Ellora Caves might be a Unesco World Heritage Site - one of 38 on the Indian subcontinent - but the journey there is far from the well-trodden path. Unless you arrive at the same time as a busload of local school children, you'll likely be undisturbed as you wander the series of temples carved into cliffs. A lack of towns and other attractions nearby means the Ellora Caves don't get the attention they deserve as one of the most impressive examples of rock-cut architecture from ancient India. There are 35 individual caves and temples to get through, including dank bat-filled grottos to vast colonnaded halls.

Built into volcanic basalt cliffs some time between the sixth and tenth centuries, the Ellora Caves took more than 500 years of laborious hand carving to complete. The diversity of religions on display is particularly fascinating: there are dedicated Buddhist, Jain and Hindu temples built into adjacent caves, interspersed with myriad smaller caves and statues telling epic tales from ancient India.

Within the complex, the most famous is the staggering 32m-high Kailasa temple, the largest rock-cut monument anywhere in the world. It's dedicated to the Hindu god Shiva, and is believed to have been built by the Rashtrakuta king Krishna I. Equally magnificent is the Buddha statue in Cave 5, where the high vaulted roof gives the sensation of being inside a giant whale. What the Ellora Caves lack in tourist amenities, they make up for in sheer scale.

Boutique accommodation is lacking in nearby Aurangabad, so an impersonal but clean hotel such as Lemon Tree Hotel is probably your best option. Zostel Aurangabad is also a solid choice.

You'll need long and modest clothing to enter the sites as it's a place of worship for many of the people visiting - a pair of loose Graham & Spencer linen trousers will keep you cool and concealed. If you're going during monsoon season, this Rains Ultralight raincoat is also essential.

Don't bother spending much time in Aurangabad; get straight out and see the caves. And if you have energy on the way back, do a detour to Daulatabad Fort, a dramatic walled citadel perched atop a hill. It's worth hiring a driver to take you to and around the Ellora Caves for the day - pick one up from hotels and hostels.

Aurangabad is the nearest major city to the Ellora Caves. To get there, either take a domestic flight from Mumbai to Aurangabad Airport or catch one of the many cheap, direct buses which take six to eight hours. From Aurangabad, the Ellora Caves are less than an hour away by car.