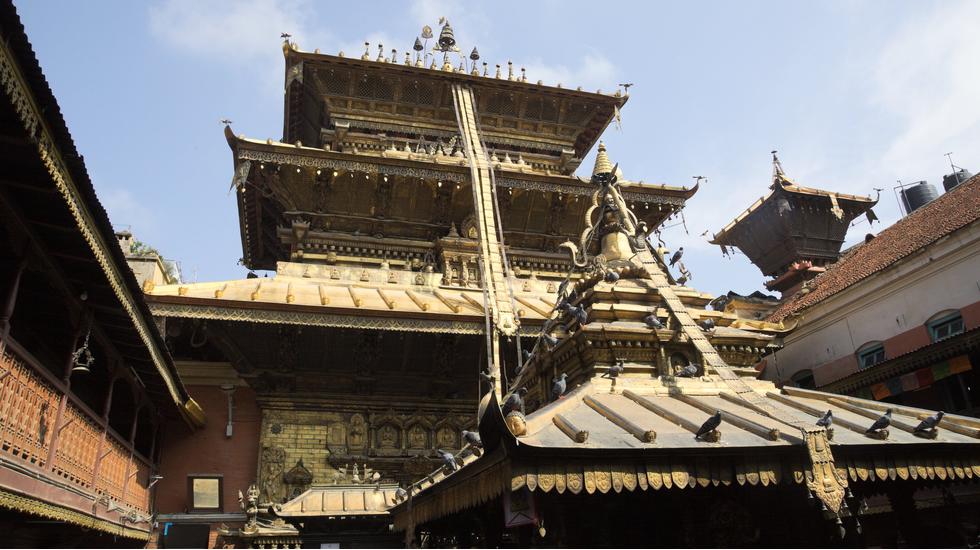 In In the heart of Patan, two men in black Nepali topis (caps) sit on a raised wooden platform just inside Hakha Bahal, the courtyard of a three-tiered monastery. Playing a game that appears to be draughts, they initially eye me suspiciously but warm up when I ask if this is the residence of the Patan Living Goddess.

"Yes, indeed. Would you like to meet her?" I didn't expect it to be this easy to make contact with the young girl who is worshipped as a goddess. Apprehensive, I say I'll come back tomorrow and slink back to the anonymity of the city's lanes. "She's here every day!" they call after me cheerfully.

Black topis are traditionally worn by the Newars, a group said to be descended from the Kirat, the legendary people of the Himalayas. Living on the crossroads of ancient trading routes in the Kathmandu Valley, a wide range of influences have mingled to create their unique culture - one that is shaped by worship of both Hindu and Buddhists deities, complicated tantric rituals and the promotion of female power. It is also one of Kumari worship, where prepubescent girls are revered as living embodiments of the divine feminine.

Both Hindu and Buddhist Newars believe that feminine power created the Kathmandu Valley itself. It is said that the valley lay under a great lake in ancient times. A lotus seed appeared and embedded itself deep in the ground at the source of a spring, from which the power of the great goddess flowed. The lotus flower grew and soon attracted the attention of a passing bodhisattva (enlightened being) who drained the lake so that everyone could visit the source of the goddess. Thus the Kathmandu Valley was revealed.

The bodhisattva trained local inhabitants in many new skills, most importantly, how to sculpt splendid mahaviharas (monasteries) and cast metal images of the gods. These people were the Newars, and the clanging of metalwork can be heard in the backstreets of Patan today.

During my six weeks in Nepal, I remain firmly lodged in old-town Patan. It predates neighbouring Kathmandu by around 10 centuries and is a more relaxed place to explore Newari culture. Historically, it has had a large Buddhist influence with four impressive stupas, dating from around 250 BCE, guarding the limits of the city. Despite suffering damage in the 2015 earthquake, the temples and palaces of Patan's Durbar Square remain an architectural delight that is central to local life. Residents young and old congregate daily on the benches outside the old Royal Palace to chit chat, while Bihari children circle the square selling candy floss and balloons.

In the mornings, I open my shutters to see women with Hindu tikkas on their foreheads lighting butter lamps on the four sides of small Buddhist chortens (shrines). I watch as they pad down the narrow lanes, carrying golden plates filled with plums, incense, flowers, rice and vermillion to offer at the shrines of both Buddhist and Hindu deities. Early one morning, as I sit observing the worshippers in the beautiful Golden Temple, I realise that I have always thought of different religions as separate. Here they have blended together; as the local saying goes, Newars are 60% Hindu and 60% Buddhist.

The Newari belief systems are set apart from their mainstream forms by their worship of the creative power of divine feminine, shakti. The Kumari tradition, practised by both Hindus and Buddhists, is the clearest example of this. Coming from a Buddhist priest caste, a Kumari must have certain physical features, no scars, and most importantly, not have lost any blood. She is selected by astrologers, usually at a very young age, and is replaced by another before she reaches puberty. Any loss of blood releases her shakti and renders her powerless.

It is during my exploration of the Patan Royal Palace that I first hear of the Patan Kumari. Elderly Ramesh is sitting in a doorway in Mul Chowk, an inner courtyard of the palace, selling garlands of orange flowers. He is next to a grand set of golden doors and explains this is Taleju's shrine of which he is the keeper. Taleju, he says, is the wrathful form of the mother goddess that Hindus believe to be embodied in the Kumari. "Only Newars allowed," he says, gesturing to the golden doors. "But you can meet our Kumari, she lives five minutes from here." Intrigued, I set off to investigate.

I had heard about the tightly guarded Royal Kumari who resides in Kathmandu's Durbar Square. Observing her behaviour, they say, can predict significant events that affect the entire nation. But the presence of a living goddess in a dilapidated monastery nearby is quite a surprise.

It is on my second visit to Hakha Bahal that I summon the guts to climb the stairs to her chambers. I arrive in the dingy waiting room just as she comes rushing through a door, thinking she is alone. My first thought is how small she is. Nihira Bajracharya has become a Kumari only a few months before, at the age of five, and my natural reaction is to smile at a child of this age. But the spirit of the mother goddess is inside her, and that is not the done thing.

Dressed in sparkles and red, with heavy kohl dramatically flicking up at the outer corners of her eyes, she quickly becomes solemn and returns to her throne. Puja paraphernalia: water jugs, vermilion, flowers and candles are scattered on the floor beside her. I am asked to wash my hands, so as not to pollute her. Sitting in front of her, I'm a little bit uncomfortable - both because she is a goddess and because she is so young. She looks at me, thankfully emoting nothing, as her tears signify your imminent illness or death. I lean forward for my tikka and nervously grapple in my bag for an offering of rupees.

I later return to her monastery to photograph the courtyard, and I see her, hanging out the window on the second floor. This time I smile, but it is met with a foreboding widening of the eyes before she vanishes suddenly. I gulp, hoping I hadn't undone my earlier blessing.

My encounters with the Patan Kumari remain with me as I creep through the low tunnels linking the bahals of the city, and I know I have only scratched the surface of this complex culture in which the eclectic belief systems challenge our monogamous relationships with religion, while the dominance of a mother goddess and hidden tantra traditions add intrigue and, of course, some concern. Tantra imagery in the cities' temples hints to secrets that I will never be privy to understanding. Nevertheless, the architecture and stories of Patan make a deep impression on me which endures long after I have returned home.