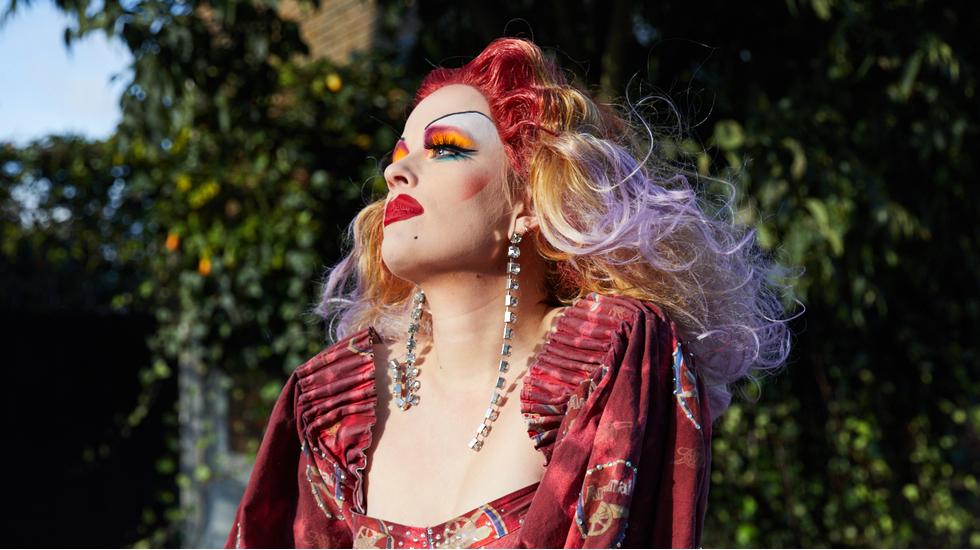 Like Like lurex threads woven against the rough weft of the urban tapestry, drag is perhaps at its most incongruous on the everyday commute. And yet it's on this humdrum stage that kings and queens are at their most political.

In north-east London sits Seven Sisters, a noisy microcosm of multicultural Britain where communities rub up alongside each other, sometimes gliding and sometimes scraping. You might not think twice about hopping on the bus or skipping into an underground carriage here, but for the drag performers who call Seven Sisters home, the commute to the thrumming queer bars of East London is nothing short of radical.

There's no telling how fellow commuters will react: the timorous avoid eye contact, others whoop in appreciation, the loutish snarl from behind curled lips - or worse. Confronted by the extraordinary, we see more clearly than ever the gendered miasma of our day-to-day lives.

"Sometimes people shout 'yaaass' across the street, other times I get heckled," says Barbs, a blonde-wigged, full-figured distillation of classic drag queenery. "What they don't seem to realise is that a girl can bite back - and usually a lot harder," she jibes. "Making that journey helps create visibility for people like me. It gives hope to the many people who want to truly express themselves."

Milk Shandy (Emma, by day) is the head honcho responsible for orchestrating Dalston Superstore's glittering parties. She echoes Barbs: "The more people are exposed to drag, the less it becomes a shock." When evening beckons, Emma paints her face, zips herself into whichever garment she's had time to stitch and puts foot to pedal on her lime-green bicycle. "There are definitely moments on that journey, like when you sidle up alongside a group of lads and think 'oh, here we go', but cycling in full drag is quite the spectacle," she grins.

In recent years, this very spectacle has become monetisable, thanks largely to RuPaul, the quick-witted New York drag veteran who has sashayed into public consciousness, one television series at a time. What was considered pantomime in the 19th century became an underground art form in the 20th, and in the 21st has entered pop culture as a pastiche of blockish eyebrows, swish-swish wigs and sassy one-liners which, if mastered, can generate rich returns. It's a lucrative approach, but it doesn't quite correlate with performers at the drag scene's much grittier grass roots.

"It's a vast art form and yet there has become this very niche thing that people expect," says Prinx Chiyo, one of London's foremost drag kings. Stubble-chinned, chiselled and boyishly small-bodied, Chiyo works from home as a cam-boy when he's not aping the affectations of modern masculinity on stage. Online, transgender sex workers can make a quick buck; navigating the world IRL requires deep reserves of emotional labour.

The line between personal safety and queer pride is difficult to toe. Some bars scrape together Uber funds to cover return journeys for trans performers, while others such as Dalston Superstore will waive the entry fee for those on low incomes so the most marginalised people can find their tribe for free.

"It's very mentally draining for gender-nonconfirming people when we are out in public because we are so visible. Even if we're just trying to exist in that space, every interaction is a vibe," Chiyo says, diplomatically. When it comes to debunking prejudice, that act of simply occupying a train seat is seen by many performers as a tough but necessary trial. It's especially difficult for those like Chiyo, whose identity as a drag performer is perhaps less obviously discernible. His masculine boots simply don't click-clack along tiled train platforms like those of an off-the-peg drag queen.

Shakona Fire isn't averse to the acoustics of a six-inch stripper heel, though they prefer to travel more covertly. Swathed in black and partially masked by a baseball cap, the self-anointed "Political Princess of London" travels incognito, only a fully powdered face of make-up to show for themselves. Unlike some other performers, Shakona's a pragmatist. For the most part, the commute is just that. "It's like when someone puts on a suit to go to work," they say. Putting on face "is just part of what I have to do, to do my job".

Shakona's politics manifest in rolicking parties - rainbows of racial diversity soundtracked by the feel-good voices of the moment and sound bites spliced from the detritus of the internet. "There's always an undertone of staying true to who you are." It's a mantra that Shakona enshrines in action.

For some, like Tom Nuttall, the poetics of public transport are irresistible. Soaring through north-east London on the top deck of a red bus as the dawnlight diffuses through the hazy city smog is one of his simple pleasures. "It feels empowering, exciting and punk."

Others might label him a drag queen, but tottering around the city's splintered nightscape in little more than a slick of lipstick and a homemade frou-frou confection is just what Tom does. He's not a performer; there's no character to embody. "To me, drag is just a feeling. As soon as you make parameters for what drag should be, it slips into men dressing as women," he reasons. "Surely, the whole point of drag is that it's rebellious and anarchistic?"

For the starry-eyed doyennes of London's queer scene it's not about getting from one place to another; it's the chaotic space in-between that really counts. It's here, in this hinterland of clattering carriages and horn-blasted pavements, far from RuPaul's Hollywood studios, that drag is at its most disruptive.