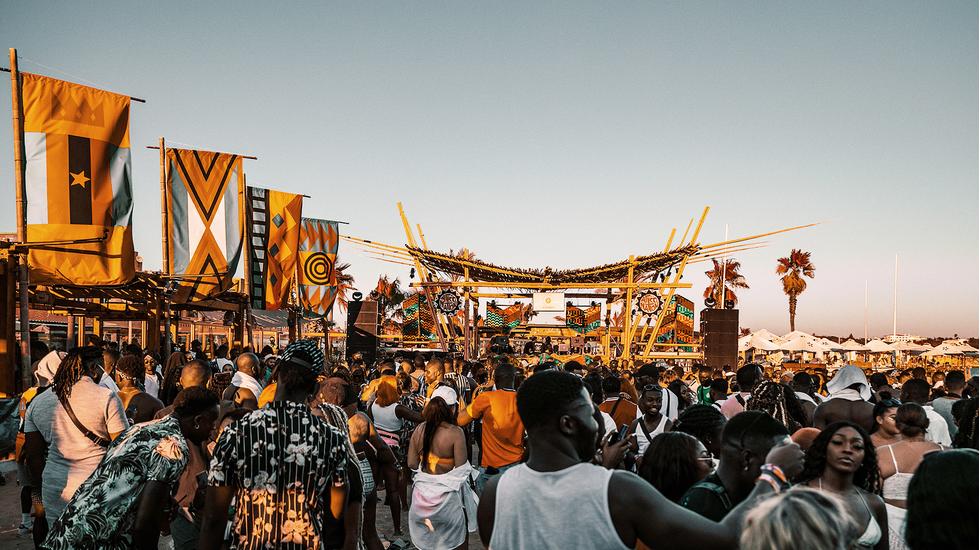 As As much as we'd like to not give the events of the last couple of years another inch of airtime, it's borderline impossible to avoid dwelling on how much we've missed the live-music scene. But, summer is on the horizon, and so is seeing our favourite artists IRL. As Europe busily prepares for the return of free-spirited travellers, we've been busy hunting down the coolest festivals to bookmark - plus, all the lowdown on where best to detox after. Follow us as we take you from Albania's Kala Festival to Meadows in the Mountains, Bulgaria.

Festival season: where to sing, dance and rest up this summer

With almost 50 inhabited islands to explore, Croatia is a hugely popular holiday destination, charming visitors with its red-roofed villages and secluded shores. And, in recent years, it's added an influx of globetrotting techno travellers to the mix. Sun, sea and sounds await in the town of Tisno, which, unusually, is located partly on the mainland and partly on the small island of Murter, accessible via a bridge. Party people can dance and sing in archaic forts, rock-hewn caves and on floating platoons at Love International, which returns to Tisno's The Garden this July. Marking its fifth outing, the blissed-out extravaganza promises sunrise sessions in olive groves and sunset boat parties.

Ireland might not necessarily be the first place that springs to mind when plotting your summer hit list, but hear us out. Over the past two years, our favourite independent arts festival has taken time to rethink and reimagine its purpose. Ditching the traditional line-up-led format, the Body & Soul organisers have halved ticket numbers and doubled up on curatorial commitment. With headline acts and events remaining secret, audiences will enjoy a weekend packed full of surprises. Among them will be forest feasts, intimate performances and moments of transcendence, all taking place in the breathtaking grounds of Ballinlough Castle.

Like Afrobeats? You'll love this one. Located in the heart of the Algarve, Portimão is known for its sparkling Atlantic shores; specifically, the stunning Praia da Rocha. It's at that very beach that the colourful Afro Nation takes place. A vibrant celebration of the genre, the festival brings together hip-hop and Afro house fans from across the globe. Atop white-powder sands, palm-fringed paths lead to three main stages, where you can catch acts spanning upcoming artists to legendary musicians, all doing what they do best. Insider tip: snag a VIP ticket to gain special access to a private beach.

Brought to us by creative power couple Josie and Rob da Bank, Camp Bestival is the ideal destination for those who prefer a go-slow, laid-back vibe - the sort that means you can slot in eight hours of beauty sleep and still have time for your entire skincare routine. Set in the beautiful grounds of Lulworth Castle, the four-day festival is packed with all sorts of performances, from circus acts to bike battles. We've taken a peek at this year's line-up and are confident it won't disappoint: festivalgoers will be rubbing shoulders with disco legends Sister Sledge, Earth Wind & Fire and Kool & the Gang. Afterwards, head to nearby The Pig on the Beach to relax and refuel at one of Britain's cosiest coastal retreats.

Separated from Italy's heel by the Ionian Sea, the low-key Balkan town of Dhërmi is sending a siren call to Europe's pleasure-seekers: kick-start your summer with an eclectic mix of music and wellness at Kala Festival. Taking place on the Albanian Riviera, the boutique event offers much more than just live music. Yoga classes, gong baths, meditation sessions and beach massages, anyone? Dhërmi's striking natural landscape rivals its top-notch party scene, so we'd highly recommend extending your stay and exploring beaches hidden under peachy-pink cliffs and hiking up the mighty Mount Çika after your long, hot week of fun.

When: 8-15 June 2022
Where to detox: Drymades Bungalows
Discover more

Meadows in the Mountains

Outdoor enthusiasts will feel at home here. Arriving at this inviting Bulgarian gathering involves ascending the winding paths of the Rhodope Mountains, past pine trees and pockets of greenery, before reaching the promised land. With just 2,000 tickets up for grabs, this is an incredibly intimate event - one that feels more like a gig than a wild festival. Camping areas see tents pitched along sloping hills, while pathways are lined with makeshift shops selling handmade jewellery and vintage clothing and wooden look-out points offer sweeping views across the surrounding landscape - unless it's blanketed in fluffy clouds or an atmospheric early-morning mist. The best bit? This place has a strong sustainable approach: steel flasks are dished out upon arrival and bars don't provide disposable cups.

The brainchild of legendary DJ Annie Mac (who is arguably the voice of our nation), AMP Lost & Found Festival has transformed Malta's St Paul's Bay into a party paradise most summers for almost a decade. Returning this June after a three-year hiatus, world-class dancers and iconic DJs will convene to entertain and spin some serious tunes. This festival doesn't facilitate on-site camping: swap your tent for a stay at Park Lane Boutique Aparthotel, where an inviting rooftop pool and delicious breakfast buffet is available.

Founded as part of a student movement, fighting for freedom in Serbia, EXIT Festival is on track to celebrate its 22nd birthday this year. Situated inside the ramparts of the Petrovaradin Fortress in Novi Sad, just above the glistening Danube River, 40 stages and over 100 artists pull in a laid-back crowd. With the site covering some 16km, the average festivalgoer is expected to rack up around 150,000 steps across the three-day celebration - we personally can't think of a better way to smash those daily exercise goals. Return to reality by taking time to explore the Belgrade capital, making The Babe Hotel (yep, seriously) your base.

When: 7-10 July 2022
Where to detox: The Babe Hotel
Discover more
Discover More
Tribal Gatherings: An Ode to Festivals
Read now