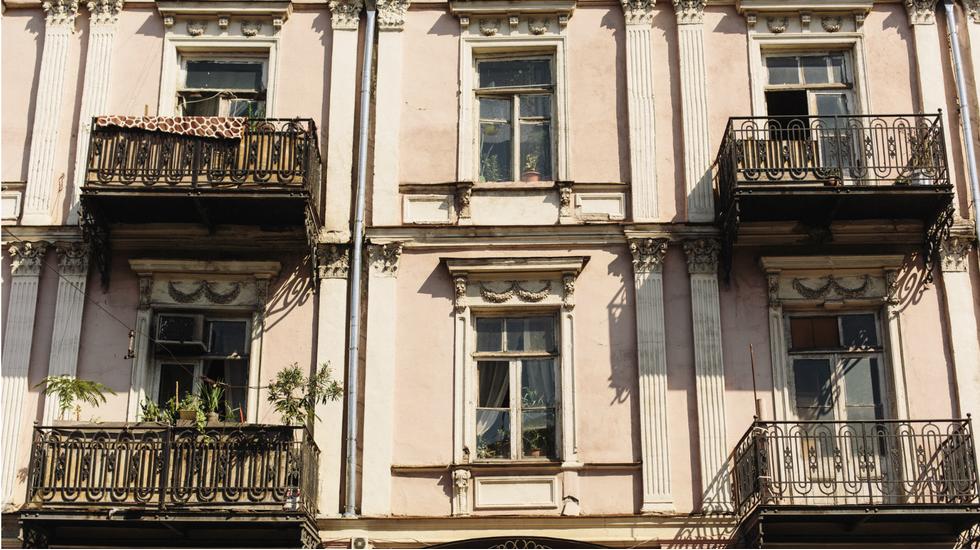 This article appears in SUITCASE Volume 16: The Spirit Issue.

On On touchdown in Tbilisi (Tuh-bil-ee-see - say it with confidence and you'll be okay) I was greeted with a swig of wine and a real-life black bear. The former was thrust upon me by relatives of a girl I'd sat next to on the plane, the latter stared out at me menacingly from a large glass box labelled "confiscated items". My unpredictable arrival more or less set the tone for a trip full of surprises.

The city where experimental electronic artist Nicolas Jaar chose to film the music video for his hit Mi Mujer, I'd heard that Tbilisi was on track to be "the new Berlin" - a label which seems to be rolled out every time an ex-communist city has a creative element to its progression (Budapest was also a beneficiary). It's a comparison I find both unimaginative and irritating. So here I was, fuelled by booze and determined not to discover the new Berlin, but instead hopefully explore a cool city carving out its own trajectory, having thrown off around 70 years of Soviet rule in 1991.

The first thing that struck me was how different the Georgian language sounds from anything I've ever heard before, which was momentarily disconcerting when, upon greeting my driver, I discovered a simple hello is something like "gah-mahr-joh-baht". The word was simultaneously melodic and jarring, and aptly reflected the continued debate over whether Georgia belongs in Europe or in Asia.

Most Georgians pin their colours to Europe, and this is certainly where Prime Minister Giorgi Kvirikashvili and his centre-Left "Georgian Dream" government position themselves, given their aspirations regarding European integration and NATO. My driver also informed me that Georgians actually refer to their country as Sakartvelo, although, as I was to discover, the link with St George (allegedly dating back to the Crusades) could hardly be less subtle, embodied in a gleaming golden statue of the dragon-slaying patron saint in Freedom Square, as well as no fewer than five red crosses adorning the medieval-looking national flag.

There's no doubt that Georgia has had a difficult run, but time heals and over the past five years the country has started to attract foreign investment and tourism - as its inhabitants slowly distance themselves from their Soviet past. Georgia's chequered history was played out over the 30-minute drive from the airport, which took us from intimidating Communist apartment blocks in bleakest suburbia to the historic town centre. Old versus new was never more apparent than when crossing the River Kura: to the left was the old town, with an ancient fortress clinging to the hillside; while the right-hand side was dominated by the dramatic space-age architecture of brand-new public service buildings, built completely from glass which (as we were proudly told on many occasions) represents the government's dedication to democratic transparency - a noble move no doubt occasionally regretted during the blisteringly hot summers.

Although we arrived at our hotel past midnight, my initial impression was that someone had got the brief for the "new Berlin" and really nailed it. Part of the Design Hotels group, Rooms Hotel Tbilisi - which opened in 2014 - was a publishing house during Soviet times, and is now spearheading development in a residential area where trendy bars such as Lolita and Ketti's are springing up and attracting a cool and arty crowd.

Tbilisi has always been a hub for creatives - even during Communist rule and the economic fallout following the collapse of the Union, locals are quick to assure us that a bohemian spirit endured. As Oto Berishvili - the hotel's immaculately dressed marketing director - tells us as we sidestep around deflating balloons, tangled streamers and cake smeared across the pavement (debris from a recent lottery win celebration) "Georgians love a party!" And it is artists and intellectuals who are paving the way for this 'new' Georgia today. The hotel's eclectically furnished lounge feels like a laid-back co-working space by day, while the city's cool cats sink into battered leather sofas to sip old fashioneds (the whisky trend has hit Georgia) on the shady terrace by night. This is a snapshot of Tbilisi's new rapidly expanding middle classes. Indeed, while the multiple construction sites of global hotel brands along the glitzy Rustaveli Avenue are evidence that Georgia is now firmly on the map for foreign visitors (a lack of natural resources means the government is investing heavily in tourism) as Oto solemnly predicts, "Tbilisi will not become a luxury destination for a while". The change is homegrown and organic, and still very much in its infancy.

But the renaissance is palpable throughout Tbilisi. Robbie and I explored on foot for a solid eight hours on our first day, getting lost in leafy boulevards in the city's old town, where peeling pastel-coloured mansions are reminiscent of Paris or Buenos Aires, their open doors beckoning you past faded fresco walls to vine-strung courtyards beneath wrought-iron balconies. But many of these historic buildings now play host to modern initiatives including the Centre for Contemporary Art, alongside various other galleries, museums and cultural centres.

Fabrika, for example, is a multi-purpose creative space within a former Soviet textiles factory which is due to open in September. Its importance lies in its intended role as a place where artists can gather to share ideas and forge connections (aided in their pursuits by several bars and restaurants, of course.) It will also house a 400-bed hostel, which hopes to attract forward-thinking, free-spirited travellers. With this sense of adventure in mind, we decided to take the funicular up to a night market in the hilltop Mtatsminda Amusement Park one evening, where we found young Georgians selling dreamcatchers and other boho trinkets as they drank beer and watched the sunset, heady electro beats reverberating from a makeshift campervan DJ booth.

This initiative was started by Kety Mangoshvili - an ethereal ex-lawyer with flowing dark hair down to her waist - and is another example of Georgia's flourishing creative scene. It is no doubt these kinds of socio-cultural enterprises that have prompted the comparisons to Berlin, and I get it. But this is Tbilisi. And all that you can really glean from that comparison is that if you like art, music and culture - particularly when it's stirring in initial stages of rawness and excitement after having been suppressed - then you'll probably think this is a pretty cool place.

But co-existing with this contemporary vibe is a not-so-modern Tbilisi. Taxis, for example, are terrible. Unregulated and unlicensed with chain-smoking drivers (everyone in Georgia smokes) and cars that would certainly fail an MOT, they hurtle down roads full of potholes and stray cats. Five out of the six taxi rides we embarked on failed to take us anywhere even remotely near our intended destination.

"Why did you continue to take taxis then, lazy fools?" I hear you say. I'll tell you why. When looking for one of the city's famed wine bars (the country has been producing wine since the Neolithic period and it's very much entwined with their national identity). Robbie and I discovered that Google Maps Georgia can't keep up with real-time Georgia, and thought taxis might stop us getting so lost.

Having traipsed up and down the road where our chosen watering hole was alleged to be about 11 times, Robbie took our failure very personally and slumped against a wall, while I suggested buying a bottle from the supermarket and cracking into it roadside. Instead, we nipped into a nearby shop to ask for directions. On doing so, it transpired that the shop had once been said wine bar but was now a glossy travel agent promoting Georgia's many sights. This irony could not have better demonstrated Georgia's rapid progression, particularly with regards to tourism. And this is what makes Tbilisi so special - simultaneously worldly yet naive, you'll find yourself intermittently bewildered and enchanted. Fortunately, Uber is said to be arriving soon.

The city's culinary scene is also evolving. I have to admit I wasn't particularly clued up on the local cuisine, being able to call to mind just one Georgian restaurant in London which, despite good intentions, I had failed to visit before my trip. A quick internet search returns images of dishes based primarily on cheese, eggs, bread and boiled beef. But while this food is common in rural Georgia, chefs in Tbilisi are turning traditional cooking on its head with contemporary twists on classics, while maintaining strongly held values of hospitality and the importance of sharing food.

We spent a long, balmy evening at Café Littera, a beautiful courtyard restaurant in what was once the Soviet Writers' Union House. Owner and chef Tekuna Gachechiladze has become a local celebrity, having trained in New York before returning to her homeland to create "nouveau Georgian" dishes such as trout tartare, with she sourced nearby and served with fresh Georgian herbs, or panna cotta drizzled with local honey. A short walk away, Ezo (meaning "courtyard") is a more casual affair, pioneering the organic-food movement and attracting a young crowd who come early and stay late, snacking on phakli (houmous-like dips made from spinach or aubergine and blended with walnuts) and making themselves at home in one of the prettily decorated rooms.

What about Georgian fashion? It's certainly thriving, with design-led boutiques and concept stores filling many urban spaces, and young people clued up on all the latest trends. O, Moda, Moda is a quirky restaurant-cum-shop where hip 20-somethings in smock dresses, wide-leg trousers and edgy sunglasses come to take respite from the heat in the leafy garden. More interesting to Robbie and I, however, were the flea markets overflowing with quirky antiquities and vintage clothing which would be devoured by East London hipsters. But these stalls have a darker side, manned as they are by the older generation peddling endless amounts of Soviet memorabilia - knives, badges, helmets and faded portraits of Stalin or "Uncle Joe" - you name it. I quietly wondered if this was their way of emancipating themselves from the past, or clinging onto it. I suspect a bit of both.

Bewildering, bonkers and frankly, pretty brave, I don't think Tbilisi is the new Berlin - at least, I hope it isn't. But like Berlin, its rapid creative progression will no doubt attract the cool kids soon. And you'll want to get there before they do.