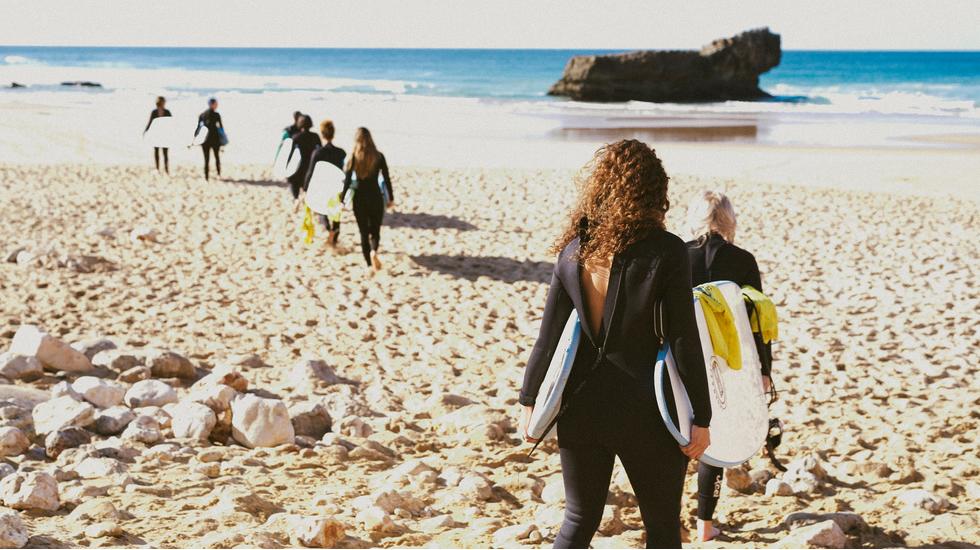 It's It's the third day of surf camp in Portugal when it clicks that I'm a surfer. I've wanted to be a surfer ever since I was a teenager, and it feels like I've finally claimed a latent part of my personality. I'm very much still riding the whitewater, but the sensation of popping up on the board and catching a wave in to shore is utterly addictive, unquestionably meditative and strangely therapeutic. "I don't think there's anything quite like surfing for clearing your head, and pushing all the anxieties and stresses of life back home far from your mind," says Kylie Griffiths, the stylist and fashion editor who set up The London Girl's Surf Club last year.

"We started LGSC as a one-off trip to encourage other women to get out of the city and into the waves in May 2017," Kylie tells me over grilled sea bass at a restaurant in the sleepy surf town of Sagres. "Initially we invited other creatives that we knew or had worked with from London that had expressed an interest in trying the sport. I had always worked in fashion and changed my path to be able to surf on a more regular basis, so I wanted to share this experience with other girls from cities."

I can fully understand Kylie's impulse to get women out of the city and into the sea. Within both my profession and friendship circle, there's a growing understanding that city life can be depleting, draining and - particularly in the winter months - dreary. I love London, and the vibrancy and creativity of the city, but I feel that the more urban my everyday lifestyle is, the more adventurous, rugged and off-grid my holidays need to be. It's all about balance, and three nights of sea, uplifting female company, beautiful surroundings and the thrill of learning a new skill is just what a London girl needs.

It doesn't surprise me that the London Girl's Surf Club's first trip got such a good response that they opened these trips up to the public in September 2017; they now run two trips a year for the public which are in the UK or further afield. Trips are priced affordably, from £650 for three-nights on an all-inclusive basis in Devon to £950 at a sleek boutique hotel in Morocco.

This year the LGSC launched a philanthropic arm by partnering with Switchback, a charity that works with men who have recently left prison. "Our aim at LGSC is to make surfing completely inclusive and we want to open up this amazing sport to people that may never have had the opportunity. I truly believe that surfing can change your life and your mindset, so it's important to us at LGSC to make this as inclusive as possible through creating a business model that is 360 degrees."

This sort of social-media-savvy business model - where media/influencer trips are used to generate interest in the public trips which then fund charity trips - is typical of a new breed of ethical tour operators that place social justice at their core.

For the traveller, choosing an outfit like this offers a feel-good factor but also performs a soulful edit on your fellow travellers; you'll be with women from all sorts of different backgrounds, but who all share a commitment to ethical tourism as well as a sense of adventure. My fellow surfers are a crew of musicians, photographers, entrepreneurs and fashion industry folk. I won't just be leaving with a newfound skill; I'll be leaving with 11 new friends.

So why women only? "There's something really special about going surfing with a gang of girls," says Griffith. "Even though there are lots of incredible women surfers, surfing is still seen as a mainly male sport, which can be intimidating when you want to try it on your own. This encourages solo travellers or groups of friends to take part or try something new."

This a surf trip with serious soul, with a thoroughly social side (we all share rooms and eat out together in the evening) but no scrimping on home comforts. Our base for this trip is the Hotel Memmo Baleeira in the laid-back beach town of Sagres. It's a 144-room design hotel with a killer breakfast buffet, welcoming bar and restaurant and - crucial when you're spending your days bashing your shins and being battered by breakers - sumptuously comfortable, minimalist rooms, with a Scandi aesthetic that prolongs the clarity of mind I get after a morning's surf lessons. It feels really good to be a surfer, but it feels even better to know that by learning to surf with LGSC, I'm helping to get other would-be surfers out there on their boards.