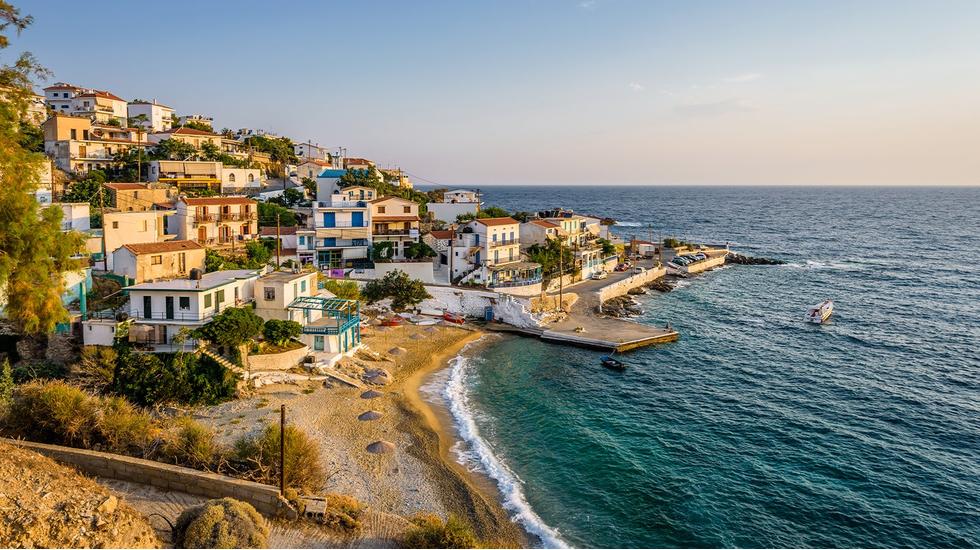 With secluded beaches, thermal waters, wine from the gods and a life expectancy that tops 90, the isolated island of Ikaria epitomises Greek life at its purest. No wonder Icarus chose this spot to fall.

Slipping over the final few seaweed-wrapped boulders on the beach, I half jumped, half tumbled into the bubbling sapphire water, scalding my leg. "Próseche!" a group of young Ikarians chorused through the steam, urging me to be careful. While it was perhaps not the most graceful entry, I hoped my initial discomfort would be outweighed by the lauded therapeutic properties of Ikaria's hot springs.

Since antiquity, people have sailed to the isolated island of Ikaria to bathe in its thermal springs, said to ease all manner of ailments. The springs are ranked amongst the most radioactive in the world, and are classified as superheated, with temperatures ranging from 31 to 58°C. And it seems Ikaria's bathers could be onto something. Alongside Sardinia, Okinawa, Loma Linda in California, and Costa Rica's Nicoya Peninsula, the island is one of the world's five Blue Zones - places where people live longer, healthier lives than anywhere else. Indeed, one-third of Ikaria's population lives past the age of 90. You'll likely see many older people wandering the supermarket aisles and drinking long past midnight in its tavernas.

Yet health concerns weren't the reason I'd decided to make the uncomfortable 11-hour overnight ferry journey from Athens to Ikaria. Seeking a more authentic experience, away from the tourist hordes on Santorini and Mykonos, I'd been seduced by the mythology surrounding this island. The well-known Greek myth goes that Icarus and his father escaped from the palace of King Minos of Crete using wings they'd attached with wax. Icarus, thrilled by the flight, soared too close to the sun, and plummeted into the sea around Ikaria, lending the island its name. The island is also believed by many to be the birthplace of the Greek god Dionysus - and therefore the motherland of wine - with many place names on the island related to his boozy legend.

In the mid-20th century, Ikaria housed some 13,000 communist exiles during the Greek War of Independence, among them many prodigious poets, writers, composers and academics who would reside on the island for several years. One of these exiles was Mikis Theodorakis, who composed the film score for Zorba the Greek, and later spoke fondly about his experience on Ikaria. Many of the exiles remained on the island, and their descendants live there to this day.

Even before the exiles landed, Ikaria had a reputation for self-sufficiency. In the 1700s, seafarers who docked at Ikaria would have laid eyes on the same crumbling golden-grey cliffs and olive shrubbery we see today - though to the untrained eye, there was scant evidence that any humans inhabited the mountainous terrain. Yet they did live on the steep mountainsides, and spent their days in fear of pirate attacks. During this dark age, residents constructed anti-pirate hideaways to blend in with their homeland's dramatic scenery. They built windowless, chimneyless houses camouflaged with giant boulders and sprawling trees. Some residences were even partially dug into the ground and roofed with large slate slabs.

In comparison to the days of fearsome pirates, the island's two ports of Evdilos and Agios Kirykos are now relatively thriving, with a smattering of shops, bars, restaurants and hotels clustered around the harbours. By today's standards though, they remain pleasantly sleepy.

If you want to get off the beaten track in Greece's islands, you have to work for it. This means longer ferry crossings at sometimes inconvenient times. Book tickets ahead of time and you should be able to secure a relatively painless 6.5-hour ferry from Athens that sets off at 7.15am, and arrives into Ikaria's Evdilos port around lunchtime. Overnight ferries, meanwhile, take over 11 hours, and will deliver you to the Agios Kirykos port around 4am. If you opt for the second, seats are often in short supply, so booking a cabin is worth it.

While choosing the ferry enables you to stop off at other islands along the way and is generally cheaper, if it's not for you a handful of direct flights jet to Ikaria from Athens each day.

Much of Ikaria's accommodation is clustered around its ports, and there are advantages to staying here. The island is extremely hilly, and inland amenities are few and far between; staying in Evdilos or Agios Kirykos allows you to visit shops and restaurants without first enduring an intense hike.

Picturesque Agios Kirkos is the island's most bustling centre; there are plenty of shops, bars, and restaurants set along the seafront. Evdilos is a quieter option, with a comparatively upscale vibe. From these ports it's relatively simple to get a taxi or hire a car to enjoy other parts of the island.

If you choose to stay inland or in seaside villages, it's vital to hire a car before heading to your accommodation, as public transport is extremely limited. Yet leaving the port behind offers a more authentic Greek experience, including local culinary traditions and surly waiters. It's here that you'll discover the island's magic too: endlessly spellbinding scenery from the precipitous mountains contrast with an abundance of brightly coloured flowers, beaches are dotted with gargantuan boulders, and the waters of the radioactive spas bubble. The glimmering sea is never out of sight.

Armenistis is a quaint fishing village on the north of Ikaria, perfect for heady days spent on the beach and invigorating hikes through pine forests. Fanari (also known as Faros) is flecked with historical monuments, has the largest southern beach on the island and, according to Greek legend, was the birthplace of Dionysus. Meanwhile, fishing village Gialiskari has a seriously off-the-beaten track vibe and is close to the golden sandy beaches of Messakti and Livadi.

Ikaria's thermal spas are a must and there's quite a few to try out. Approaching Lefkada spring across the boulder-filled beach, you won't be able to tell where the chilly Aegean Sea stops and the hot water begins, but upon closer inspection, bubbling waters and spiralling steam give it away. There's no fee to get into this spring, but there's also nobody lifeguarding, so watch your step, particularly if you're the only one around.

Spilaio Spa is sequestered inside a natural cave on the beach of Therma, and has been thoroughly renovated with swimming pools and jacuzzis added to the complex. Entrance costs a couple of euros. If you prefer a more traditional spa experience, try the equally cheap Apollon municipal thermal spa in Therma's village square. This includes a sauna and jacuzzi, as well as 26 large tubs for treatment, and is accessible for people with disabilities.

These thermal spas are intensely hot. Remember to stay hydrated, and don't spend too long in the waters or you could end up feeling woozy.

Ikaria's sparkling coastline boasts 29 beaches, pebbled and sandy, vibrant and secluded. Pack a picnic and head to the popular Kampos or Kyparissi beaches if you're looking for a traditional family day spent on the sand. Seychelles beach, created several years ago by a landslide, is known as one of the island's most beautiful thanks to its white sand, aquamarine waters and craggy cliffs. If serenity tops your itinerary, try Iero beach; until recently there was no access to this pebble beach, so it's still frequently deserted.

You don't need an excuse for a glass of wine on holiday, but if you did, surely visiting Dionysus' mythical birthplace is the best you've ever had. Fittingly, Ikaria has been famous for its wine for thousands of years, with the island's strong, deep red wine "Pramneios Oinos" even getting a nod in Homer's Odyssey. Highly valuable in the ancient world, this beverage was said to have magical powers that helped to prepare the Iliad heroes for battle, strengthening their military fury. The wine on Ikaria is often drunk young, making it taste sweeter and stronger than your usual vintage, so be prepared. True wine connoisseurs should motor to the Ikarianwine Club in the village of Piyi to learn more about this noble tradition, and try a few glasses along the way. Drink deep, but try not to be overcome with military fury.

One of the best things to do on Ikaria is to hire a car and simply follow the highway etched into the mountains around the island. Purple, blue and yellow flowers line the roads, and steep, jagged cliffs dotted with olive-green vegetation provide a dramatic backdrop. It's hard to tear your eyes away. Every so often you'll come across a small settlement of whitewashed homes or fishing villages where you can stop for fresh seafood and saganaki (fried cheese) as crystalline water laps at the harbour and cats gather round, ready to snatch your lunch.

Verdict: Is Ikaria for you?

So, is Ikaria worth the long slog on the ferry, when you could get to other, more popular Greek islands more easily?

Granted, Ikaria doesn't necessarily have the glamour of Santorini, or the party atmosphere of Mykonos, but if you're looking to immerse yourself in unspoiled Greek culture, thrilling mythology and history - and to escape the international tourist crowds - it's hard to beat. For such an isolated island, the impact it's had on Greek culture is unparalleled. Secluded beaches, wine straight from the Greek Gods and a shot at living past 90 doesn't sound bad does it? No wonder Icarus chose this spot to fall.