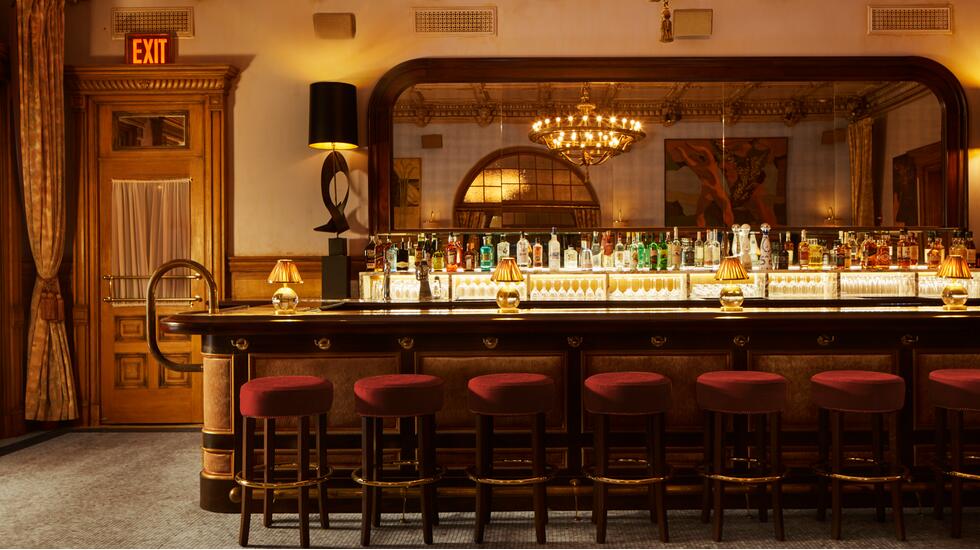 If If hotel reviews were dating profiles, you'd swipe left on New York City's Hotel Chelsea - "desperate" and "grimy" being just a couple of the disparaging adjectives to have been lobbed its way over the years. But, on considering that "desperate" came from the pen of singer, songwriter and punk poet laureate Patti Smith, and "grimy" from that of Arthur Miller, one of the greatest living playwrights of the 20th century, and that these two number among literally dozens of legendary artists to have lived in and worked out of the 1884-opened "flophouse", you might find your thumb hovering.

Having sashayed back onto the scene this spring, following an 11-year hiatus, the eccentric yet seductive West 23rd Street building has had a top-to-toe makeover, courtesy of new owners, NYC hospitality heavyweights Sean MacPherson, Ira Drukier and Richard Born. The trio, who bought the hotel in 2016 for a reported £208 million, are behind the relaunch of all-day-diner El Quijote, the moody, solarium-flanked Lobby Bar (the property's first - official - drinking den) and new outdoor space.

One of 115 guest rooms, left, and the Lobby Bar. | Photo credit: Annie Schlechter

It's the original features that have survived the refurb, though, that will entice those seeking ghosts of the past. Did Andy Warhol walk across that mosaic-marble-tile floor while shooting here? Janis Joplin trail her fingertips along that brass rail? Were the passing faces of Stanley Kubrick, Leonard Cohen, Allan Ginsberg, Bob Dylan et al reflected in that mirror? Then, there's the black wrought-iron staircase bannister that partygoers would've passed on one of Hotel Chelsea's most tragic nights, 12 October 1978, when an out-of-it Sid Vicious of the Sex Pistols stabbed girlfirend Nancy Spungen to death. Mercifully, still here - to have got rid of them would have been sacrilege - are many of the artworks given by former residents to the hotel's longtime former manager Stanley Bard in lieu of cash when they couldn't make rent.

Further to an outcry over what was to become of them, full-time inhabitants who obtained their Hotel Chelsea apartments through New York's rent stabilisation scheme many years ago won the right to remain in situ. Who knows, some may be willing to stop, connect and share war stories in the lobby. These stalwarts would undoubtedly champion the memory of Philip Hubert, architect of this one-time utopian commune. A devotee of the socialist theories of French philosopher Charles Fourier, he was responsible for the city's first cooperative apartment houses, in which tenants saved money by pooling fuel and services. Hubert made sure there were apartments for the tradespeople who'd built the hotel, surrounding these electricians, plumbers and construction workers with writers, musicians and artists.

Sure, sipping Manhattans in the Lobby Bar might be new for 2022, as is the monogrammed 400-count bed linen with crimson piping, but this is a bolthole built on stories as much as bricks and mortar. Walking its hallowed hallways can't fail to fire up the imagination. Because, in the words of Patti Smith: "Everybody passing through here is somebody, if nobody in the outside world."

If it's good enough for Gigi Hadid, Jennifer Lopez, Kate Hudson, Kristen Stewart… The embodiment of gritty chic, this place started out as the far more prosaic Dry Dock Savings Bank, designed by architect Leopold Eidlitz in 1875. Demolished in 1954 and replaced with a gas station, part of which has been retained - hence the "1954" on the corner parapet - the Bowery has been dazzling the New York in-crowd since 2007. Capturing the essence of bohemian apartment living, this is a stay for those who appreciate moody lighting, gothic styling and prime people-watching - the in-house Gemma restaurant has seen more than its fair share of gossip in its day.

Conceived by New Orleans modernist architect Albert Ledner in 1968 as HQ for the National Maritime Union, and open in its current guise since 2003, this 125-cabin, nautically themed Chelsea stay makes for a memorable voyage of NYC discovery. The plush, playful cruise ship-like design makes the most of the building's Hudson River views, with porthole windows being a fun feature of your snug but oh-so-stylish quarters. Peruse the wooden bookshelves - which house a National Geographic collection dating back to 1965 - dine at intimate Italian trattoria La Bottega or basement Japanese crowd-pleaser Matsuri, then set sail to explore the vibrant Meatpacking District, home to the Whitney Museum, the High Line elevated park and shopping mecca Chelsea Market.

Another crashpad once considered crummy, the now ultra-refined Washington Square Hotel started its hospitality life in 1902, as the Hotel Earle. Among those to have passed through are Ernest Hemingway, who stayed here before shipping out to serve in the First World War, Dylan Thomas and his wife Caitlin, in the 1950s, and a long line-up of musicians including Barbra Streisand, Bo Diddley, Chuck Berry and the Rolling Stones. Today, the art deco-influenced decor pays homage to the address's starry past, featuring an array of prints, paintings and photos; spacious, smartly dressed rooms offer luxurious amenities; and the rooftop garden delivers organic produce to on-site North Square Restaurant.