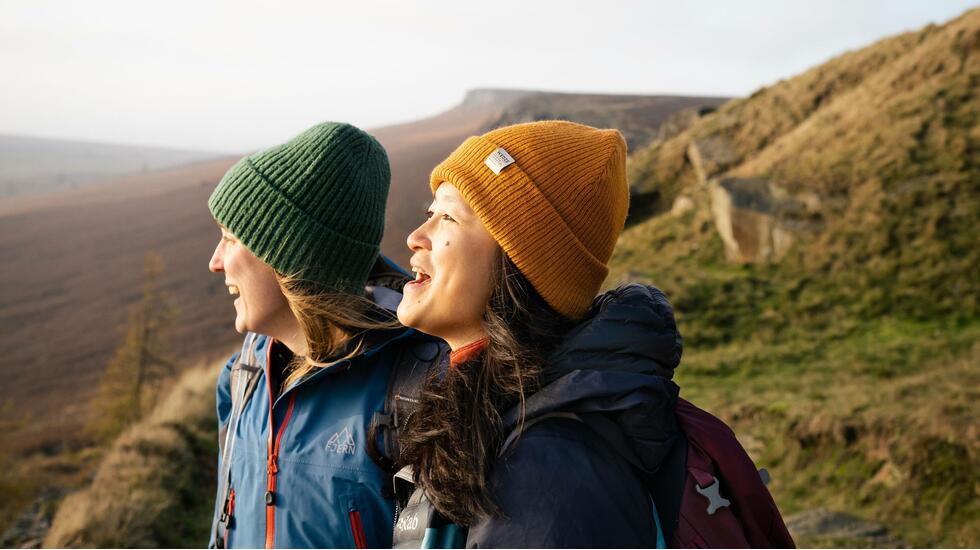 We're We're ambling through dew-coated fields towards Stanage Edge, a 350-million-year-old gritstone escarpment in the Peak District. There are 11 of us, and it's one of those crisp autumn days when mist clings to the surrounding hills; when cobwebs strewn between branches glisten in the sunlight. Staring down at a map, we gather round and discuss the best route to take. The few hours prior to this were spent learning how to interpret the many symbols, grids and scales of a map, so that we're now able to better identify relevant landmarks and locations, and the brown lines that bleed across the page no longer look like bundles of unfurled ribbon, but tell-tale contours instead.

Strangers at first, we've been brought together by a collaboration between Bird Outdoors, a women-focused outdoors store and community that hosts monthly hikes and cycling days, and Harriet MacMillan, the founder of Navigation with Harriet, who's a qualified mountain leader running a range of adventure courses for underrepresented groups. Part-funded by the YHA, it's an introduction to navigation and route planning that's geared specifically towards women, trans and non-binary folk, in a bid to improve skills, boost confidence and increase representation of minorities in the outdoors.

Because, while the majority are blissfully unaware of the invisible barriers that prevent people from accessing nature, obstacles quietly exist in abundance. Cost, proximity to rural areas, transport, and a narrative that historically places white middle-class men at the centre of outdoor spaces and sports (to the detriment of everyone else) are just some of the obstacles that must be overcome. It's only in recent years that we've begun to dissect and, very slowly, dismantle those preconceived ideas. Now, a slew of targeted groups are paving the way for everyone to forge closer connections to the wilder environments that lie beyond the boundaries of the UK's towns and cities.

The current surge in the number of people wanting to spend time in nature has mostly been attributed to the pandemic and a reaction to being confined at home for the best part of two years. But for some, the yearning for broader horizons runs deeper. Ailish Breen (whose pronouns are they/them) set up Queer Out Here, a group offering day trips and weekend breaks for LGBTQIA+ people, at the start of 2020. The aim was to share their love of the outdoors with their community while also challenging pre-existing notions about queer spaces, which tend to revolve around clubs and bars. "Traditionally, that's where queer people feel safe, accepted and free to express themselves," Breen explains. "And that's a wonderful outlet to have. But spending time outdoors is one of the most powerful resources we have at our disposal to be able to build resilience, restore ourselves and improve wellbeing."

Underpresented groups feel excluded from spaces such as the Peak District.

For the LGBTQIA+ community, addressing these factors with a positive mindset is particularly pertinent. "Rates of depression, suicide, alcoholism and drug abuse are much higher for us," Breen adds. "And so we need to take care of ourselves. Getting outside connects you to yourself, to each other and to the world around you, and it reminds us that we're part of something bigger."

There's plenty of research to back up the idea that nature improves both physical and mental health, but, despite its omnipresence, that doesn't mean it's available on tap. "I struggle when people say things like 'the outdoors is for everyone', because it disguises the fact that not everyone has access to green space, because of where they live, their socioeconomic background or lack of experience," Breen says. "That's why being in a group of people like you is so validating - it makes you feel a sense of belonging and that's incredibly powerful. It can be transformative for people in feeling secure and safe in their identity."

Phil Young, co-founder of Black Trail Runners, a group seeking to increase the inclusion, participation and representation of Black people in trail running, agrees. "There is a sense of confidence and security in turning up to an event alongside someone you share an affinity and cultural nuances with," he explains. "Being part of a community is really changing the game because it means people who otherwise wouldn't have left the city, who might be afraid of running in the woods, can now do a sport that they love."

Organised events offer a sense of security and confidence.

Young's personal experience served as the catalyst for starting Black Trail Runners. Having travelled to Chamonix in France to compete in the world-famous UTMB Mont-Blanc, a 171km race that spans valleys and snow-capped peaks, he was surprised to discover he was the only person of colour among thousands of runners on the start line. Returning home, he vowed to explore the reasons behind that void. His quest led him to meet people who shared the same mindset and joy when running on lush, winding trails, and discover a collective determination to raise barriers and highlight the benefits of being outdoors for communities beyond the typical male, white adventure bracket.

"Having access to nature is important," he says. "And a lot of the time we've either forgotten that fact, we've not been told it in the first place or we don't have access to it - and that means we don't understand why we need to go there. But it's unnatural for so many people to live in cities and so we've lost our emotional attachment to natural spaces. It's easy to get wrapped up in the rat race, but when you're on the trails, you're able to let go of all that and life makes a lot more sense."

Mountain and expedition leader Amira Patel discovered that, too, while scaling craggy rock faces and, with the space and time to think clearly, she realised that the power of nature could connect her with others. She went on to found The Wanderlust Women, a hiking and adventure group that encourages Muslim women to explore beyond urban boundaries and, further, to challenge what's historically been expected of them.

"Amira wanted to inspire as many women from ethnic backgrounds as possible," explains Shareen Abbas, a leader at The Wanderlust Women. "And to encourage people who aren't typically exposed to the outdoors - to show them that if she can do it, then they can, too. In the past, that representation wasn't really there - you never saw someone wearing a headscarf or a niqab out in the hills. We don't look like typical hikers, so being with women who understand the struggle over simple things, like what to wear, what material to get and where to buy certain clothing, is nice."

Inclusive adventure groups provide the opportunity to reestablish an attachment to natural spaces.

More than that, the excursions, both in the UK and further afield, provide a safe space for Muslim women to explore identities and push limits. "Some of our participants are single mothers, or have health problems," Abbas adds. "And being outside takes people away from that. It's like starting from afresh really, and that can make you feel so free."

She describes how a swimming retreat in the Lake District quickly evolved into what felt more like a sisterhood. "We stayed in a bothy, and for lots of us, that was our first experience of accommodation like that," she says. "And it grew from there. Now we all encourage each other and we feel less alone because suddenly we're not the only ones in the countryside who look a bit different."

"Sometimes, we don't realise how much it means to women to just be there in that space," Abbas concludes. "On the first day, [the group] can be quiet and timid, but slowly you see them start to come out of their shells. Our aim is to keep pushing for representation and diversity precisely for that reason. We deserve this place in the outdoors."

Other groups worth checking out for inclusive events and excursions include:
Discover More
The Power of Love: Kolkata Rainbow Pride Walk, India
Read now