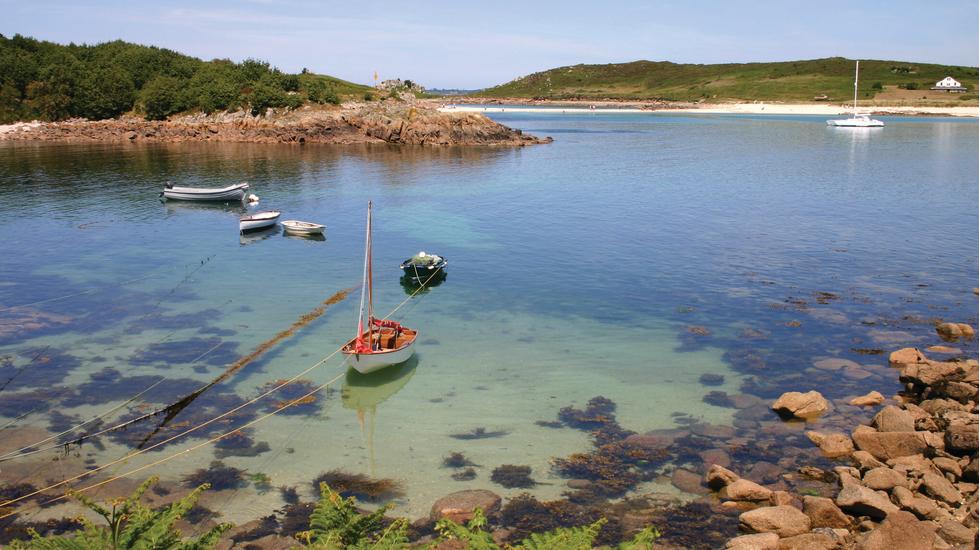 When When the islands aren't hosting the World Pilot Gig Championships, life here ambles at a slow speed. Giant granite cairns guard white-sand bays. Wild seals pop whiskered heads through floating carpets of mermaid's tresses and lounge on the rocks, flippers resting on their rotund bellies. Just five of the 145 islands that make up the Scillies are inhabited, the rest are a playground for the seals, puffins and gannets.

While the Isles of Scilly might appear like a rural idyll of stone houses and white picket fences, a different story unfolds offshore. The sea surrounding the islands is an enormous, watery cemetery for over 500 ships. The 16th-century Garrison Walls on St Mary's, once a vast defence system against the Spanish Armada, now harbours a luxury hotel and vineyard. Bizarrely, the seemingly peaceful Isles of Scilly were (technically) still at war with the Netherlands until very recently. The 335-year war began during the 17th-century English Civil War and, although there wasn't a single casualty or shot fired, it only officially came to an end when the Dutch ambassador came to the islands to sign a peace treaty in 1986.

The Scillies are easy to reach for a weekend, being just 15 or 20 minutes from Cornwall by helicopter or plane respectively. For a slower journey and the chance of seeing dolphins, catch the Scillonian ferry from Penzance (2 hours 45 minutes). In spite of the islands' accessibility, you'll have no problem in finding a picture-perfect beach to yourself, even in high season. We've boarded ships tall and small, combed the coastline and consumed outrageous amounts of Cornish ice cream to bring you our highlights of the archipelago.

Hell Bay Hotel could not be more inappropriately named; the location is heavenly. The hotel has just 25 suites spread out across the expansive grounds and is the perfect place to escape in style from the world. Remote little Bryher is an island of contrasts, one coast rugged and windswept, the other sheltered sandy bays and calm waters.

With its own boatman, an on-site vineyard and a prime position inside the old Garrison Walls, the Star Castle Hotel takes some beating in terms of character. The hotel offers panoramic views of the neighbouring islands with all the amenities of Hugh Town – the largest town in the Scillies – being just a 10-minute walk down the hill.

Choose from camping or self-catering cottages on the most southerly inhabited isle of the archipelago. Wake up to the sound of waves lapping at the pebbled beach and round off the day with the farm’s famous ice cream, sold throughout the Scillies. Troytown Farm is a working dairy so it isn’t uncommon to find an inquisitive cow peeping through your window.

Peninnis Farm Lodges takes glamping to a whole new level. Each of the seven lodges is named after the island's pilot gigs and comes equipped with a barbeque for warm summer evenings and a wood burner for chillier nights when the Atlantic storms roll in. Fresh eggs and meat from the farm are available to buy through an honesty box system. The views from the farm are enviable, stretching across the rugged granite tors of Peninnis Head to Bishop Rock Lighthouse (allegedly the world’s smallest lighthouse).

Staying at Veronica Farm is like staying in a botanical garden. Succulents, herbs and vegetables branch out in neat rows from the farm to meet the ocean. Veronica Farm has three self-catered cottages but if you don’t fancy cooking during your stay, you’re not likely to go hungry. Owner Issy Tibbs greets guests with a cream tea upon arrival and homemade fudge is whipped up fresh in the farm kitchen.

Tresco Island has numerous self-catering options, including old mills and sail lofts as well as traditional cottages. Timesharing (locally renamed as “islandshare”) on Tresco is also very popular . A full list of self-catering options and Islandshare properties can be found on the island’s website.
+44 1720 422 849 Go to website