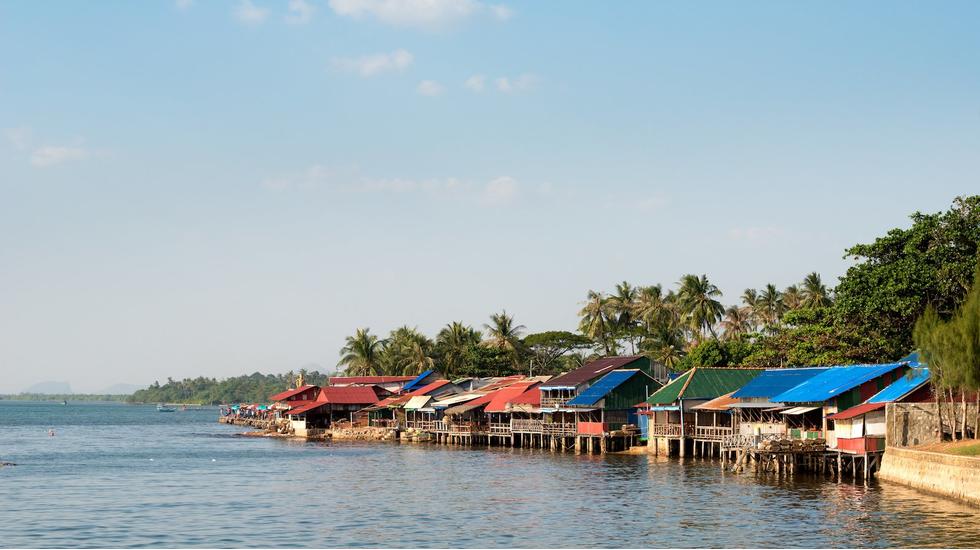 Twenty Twenty Buddhist monks hurtled down the wide stone jetty, whooping and laughing. Keen to escape the swell of the midday sun and the thick black smoke billowing from the beach's numerous barbecues, a number of the party plunged headlong into the silver water, burnt-orange robes fanning behind them. Others flung their garments over the gleaming body of the White Lady sculpture and picked their way across the pitted rocks, careful not to crush the purple crabs that clattered there.

Hundreds of hammocks had been strung and rugs laid under the ancient trees fringing the deserted sand. In the vast puddles of shade, extended Cambodian families shared charred cuts of chicken and steaming mountains of rice, the men gulping Angkor lager as their masked wives tended to grills. Bursts of distant laughter from the swimming monks regularly punctuated the languorous haze. The weekend was proceeding as normal; life being lived and enjoyed. Yet just a short distance from the beach stand the crumbling concrete spectres that have long haunted Kep. Unfinished 1970s vacation villas blight the thick vegetation, some strangled by bamboo scaffolding, others graffitied and rotting. It is here that the ghosts of Kep congregate.

My visit to Kep was a happy accident - I'd never heard of the idyllic south coast town until just a week before my arrival in Cambodia. Chatting to a tuk-tuk driver in Siem Reap, I'd revealed my plans to journey south to Sihanoukville, a booming tourist town. "Sihanoukville is not so good right now," he'd countered. "Lots of Chinese investment - it's all casinos." He'd offered an alternative: Kep province.

Upon arriving, I quickly found that Kep has everything required of a relaxing holiday spot. A hefty golden beach is planted in the diminutive town centre, surrounded by a smattering of guest houses, restaurants and delis. The smooth coast road offers jaw-dropping views of the silver sea glittering, millpond-flat, to the distant horizon. Down unassuming dirt paths hide tiny, rambling fishing villages. Here, men moor their mint-green boats on roughshod jetties and children rollick around inside stilted wooden houses. Glance upwards towards the mountains and you're rewarded with a panorama of the deep green, thickly tangled national park - a stunning, lizard-filled hiking spot. The rustic paradise island of Koh Tonsay - known as "Rabbit Island" to travellers - lies just 20 minutes away by boat. The vibe is irresistibly relaxing.

Then there's the crab. Arriving in Kep, you're offered an uncanny crustaceous greeting: a large plastic crab sits 10 metres off the coast, raising its pincers to the clear blue sky. "Welcome to Kep", reads the bold lettering on its plinth. This strange salutation is not an anomaly: Kep is famous for its crab. At the heart of the town squats the pungent crab market, where fishermen smoke by bamboo crabbing baskets as their wives flog keyrings and bracelets to tourists. Plastic buckets are lined up outside nearby eateries, from which waiting staff snatch sea creatures, ready to be expertly cooked and plated up for salivating patrons. At night, dots of light from the head torches worn by fishermen weave above the inky water as they lay their traps, layered with dead fish to attract crustaceans.

Yet despite its myriad treasures, there's something missing: international travellers. While international tourism has slowly and quietly been increasing over the past 15 years, and the French expat community is expanding once more, this enchanting south coast destination has spent the last few decades as little more than a ghost town.

Kep's gentle charms have not always gone unnoticed. In the early 1900s, French colonialists commandeered Kep, transforming it into a high-end holiday resort. By the mid-20th century, with Cambodia declaring independence from colonial rule, the French had been joined by well-heeled Khmers, who travelled to Kep from Phnom Penh for a slice of hedonism. As the 1960s arrived, Kep had become well-established as a vacation playground for the capital's glitterati, who commissioned extravagant modernist-Khmer holiday villas amid the tropical vegetation. The royal family were often in town, with Prince Norodom Sihanouk using Kep as a setting for many of his films. Champagne, gourmet cuisine and black-tie dinners were the order of the day during this glamorous era, with stars like Jackie Kennedy Onassis and Catherine Deneuve rumoured to have swung by. The nearby island of Koh Tonsay hosted wild parties that ended only as the burning orange sun rose above the horizon.

But when the Khmer Rouge seized power in the 1970s, installing a brutal and genocidal communist regime, the party came to an abrupt halt. Wealthy urbanites who holidayed in Kep - professionals, intellectuals, artists - were high on Pol Pot's heartbreaking hit list. Many of the faces of those who once sought solace in Kep can now be seen in Phnom Penh's Tuol Sleng Genocide Museum - a four-hour drive away - where they stare out at visitors from black and white headshots; some defiant in the face of their captors, others clearly terrified.

As its former holidaymakers were inhumanely slaughtered, and even after the downfall of the totalitarian regime - as the country desperately tried to recover from the horror perpetrated by Pol Pot and his followers - Kep languished. Roots and vines snaked their way through the walls of holiday homes, the thick grasses of their gardens grew wildly, and the once-magnificent villas began to crumble.

But gradually and ever so carefully, as the people of Cambodia tried to put the painful memory of the genocide behind them, plans for Kep's rebirth were hatched. The province has now been set up ready for its third life as a booming resort. Holidaying Cambodians have cautiously returned to the once-starry destination, but it's ready and waiting for international travellers too.

Tarmac has been smoothed over potholed roads and the beach expanded. Hotels on the coast have been bought and renovated by big five-star chains, while mid-range guest houses run by expats dot the hillside, perfect for the backpacker crowd. Expensive restaurants have sprung up, offering an alternative to Khmer barbecue and crab-market fare. The chic Sailing Club rents out kayaks and paddleboards, as well as hosting sundowners with live music. Western luxuries such as fine cheeses and wines are readily available. While a tourist port project fell through, many believe it will be revived over the next few years. But a similar development in Kampot, just a half-hour drive away by tuk-tuk, is slated for completion in 2019. One way or another, an international tourist boom is coming - Kep's hoteliers and restaurateurs are certain of that.

Walking along a rocky dirt track leading to the national park one day, I happened joyfully upon a tapas restaurant. "Five years," says the Spanish owner, serving me a creamy hummus dish. "Five years and this place will be overrun with tourists." The American owner of a hotel down the road agrees: "We're already seeing a steady year-on-year increase in guests." Indeed, real-estate prices here have rocketed over the past decade, as heavy Chinese spending pushed up prices in Sihanoukville and hotel-building investors sought an alternative location.

Speaking to Sorn Seap, the former vice-president of the Cambodian Valuers and Estate Agents Association, said that Kep - along with neighbouring Kampot - could become a "second Sihanoukville" in the next 10 years. "The two provinces are likely to gradually attract many developers and investors in the years to come," he noted.

As tourists turn away from Sihanoukville's casino coastline in search of a more tranquil and authentic experience, Kep is already on its way to re-living its glitzy past as a flourishing seaside destination. That feels largely positive: this is a place that deserves to be enjoyed. But with investors now eyeing up Kep, travellers should act fast to reach this chilled, chic destination before the shimmering horizon is eclipsed by high-rise hotels.