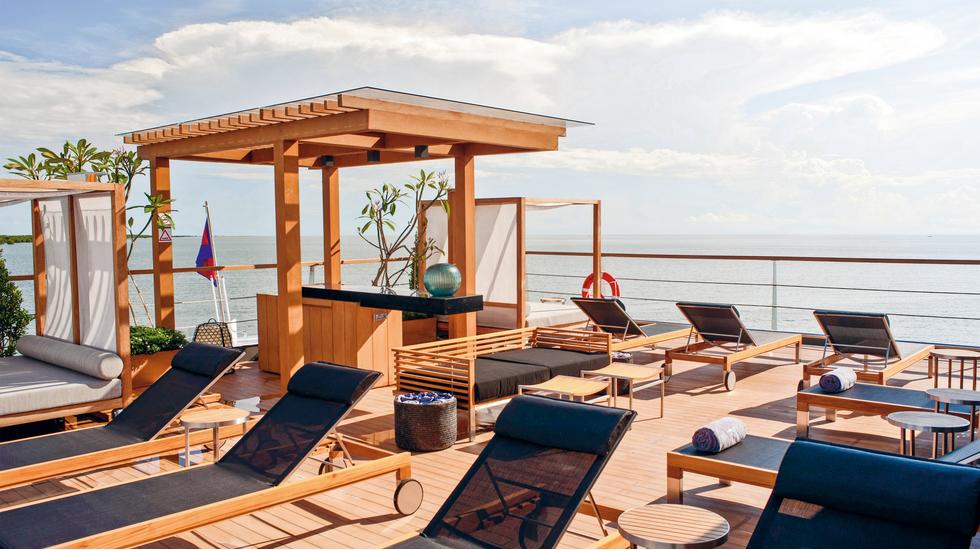 There's There's something incredibly dreamy about drifting lazily down a river on a boat. The fresh, earthy scent of the breeze that softly tickles your skin is intoxicating as you meander past quotidian scenes, lulled by the low hum of the engine and the gentle lapping of the water.

It's mid-morning and I am sitting on the sundeck of Aqua Mekong, a 20-cabin riverboat that journeys along the Mekong and Tonlé Sap rivers between Siem Reap in Cambodia and Ho Chi Minh City in southern Vietnam. We have just returned from an early morning excursion to Prek Toal Core Reserve, a 42,000-hectare bird sanctuary in a freshwater swamp forest that is alive with flocks of exotic birds, many of which are endangered. Our guide Smiley, a cheerful man from Phnom Penh, tells me that because former egg poachers have been employed as nest guardians the numbers have recovered in recent years. "This is the largest water bird colony in Southeast Asia," he says enthusiastically. "There are over 150,000 species - from stalks to pelicans - that have been recorded here, including a number of very rare, endangered birds like the Bengal Florican."

We are, in fact, sailing on Tonlé Sap, a massive 75-mile long freshwater lake and the largest in Southeast Asia, which Smiley says regularly quadruples in size during the rainy season. "The lake is connected to the Mekong by the Tonlé Sap River," he explains precisely. "For most of the year, the lake flows into the Mekong, but from mid-June to late October during the rainy season the Mekong rises, causing the Tonlé Sap River to reverse its flow into the lake and expand."

As a result the surrounding wetlands are a lush Eden for all sorts of plants and animal life, prompting Unesco to designate it a Biosphere Reserve in 1997. As we gently chug along the lake, alternately eating and napping while passing picturesque scenes of traditional straw-hatted fishermen in solitary long-tail boats, backed by a serene shore and a haphazard swathe of bright- green rice paddies that stretch to the horizon, I am struck by the magnitude of the mighty Mekong. The world's 12th-longest river at around 4,350 kilometres, it flows through six countries starting in the Tibetan Plateau and sweeping through China's Yunnan Province, Myanmar, Laos, Thailand, Cambodia and Vietnam before spilling into the China Sea.

The lifeblood of the region, it is said that over 60 million people depend on the river for their primary source of income and sustenance. This becomes evident later that afternoon when we reboard the boat's skiffs and zip off to Moat Khla, a remote floating village on the eastern edge of the lake. We pass a lively primary school, the children in their smart white and blue uniforms waving happily from their platform, and disembark briefly at the temple for a Buddhist blessing with the monks before hopping on kayaks. As we paddle leisurely along the canals and past the jumble of corrugated iron shacks, the water lapping gently against them, we pass homes where women and children are diligently preparing their caught fish either for their own needs, to sell or to barter with on the banks in exchange for rice. Later Smiley tells me that the lake is a breeding ground for fish and that about half of the three or so million people - many of them of Vietnamese origin who left their country after the war - who live around the area make a living as fishermen, with the lake said to provide half of the fish consumed in Cambodia.

Back on the boat evenings are a convivial affair, with most of us congregating in the living room bar for a pre-prandial drink before heading to the dining room where food is served family-style to groups that form as guests become better acquainted. Overseen by consulting Michelin-star chef David Thompson, the daily-changing menu takes its cues from the Mekong and its diverse cultures, and only uses what the river and the market provide. While a Western menu is also on offer, the more interesting options are the local dishes like smoked fish, tapioca and vegetable dumplings; Vietnamese catfish minced with shallots, chilies and Thai basil; or grilled river prawns with peanut relish.

The boat is the sister to Aria Amazon, which traverses the Peruvian Amazon and set the bar for parent company Aqua Expeditions' reputation for design, excellent dining and well-considered excursions. The boat's slick, contemporary look is the work of the company's founder and CEO Francesco Galli Zugaro, while the minimal timber-based interiors are by Saigon architects Noor Design. Each of the capacious cabins - some with balconies - have floor-to-ceiling windows and en-suite bathrooms with double basins and a sizeable shower. The public spaces include a small indoor dining room, a front and back deck - one dotted with daybeds and loungers, the other a small bar and plunge pool - a gym, spa, library, private screening room filled with Eames lounge chairs, and a massive living room and bar on the top deck that stretches nearly the length of the boat. It is the four specially-designed aluminium tenders though, that set the Aqua Mekong apart. With capacity for only ten passengers each, not only is the intimate guide-to-guest ratio favourable, but they also provide access to offshore destinations and to shallower parts of the river that many other luxury cruisers can't reach. Consequently the excursions on offer are intimate, diverse and immersive, taking full advantage of the region's rich biodiversity and strong cultural heritage.

Over the next few days we explore a series of rural villages where we learn about remote riverside life and chat to the locals about their traditional crafts. At Kampong Chhnang and Koh Chen, those who don't buzz off on tuk-tuks hop on mountain bikes for a ride into the countryside to visit palm-sugar producers, potters, silversmiths and silk weavers. As we pedal out of the lively town and onto the wide, dusty dirt tracks, the gleeful cries of children running out to greet us alternates with the sound of cocks crowing as the golden glow from the late afternoon sun washes over emerald rice paddies punctuated by the silhouettes of temples and palm trees.

On my last day we approach the confluence of the Tonlé Sap and Mekong, and sail into a steaming Phnom Penh, its traffic-choked streets and towering skyscrapers so overwhelmingly different to the city I first experienced 15 years ago. I know I am going to miss the tranquillity of the days spent quietly meandering along the waters, past ramshackle villages and rice paddies.