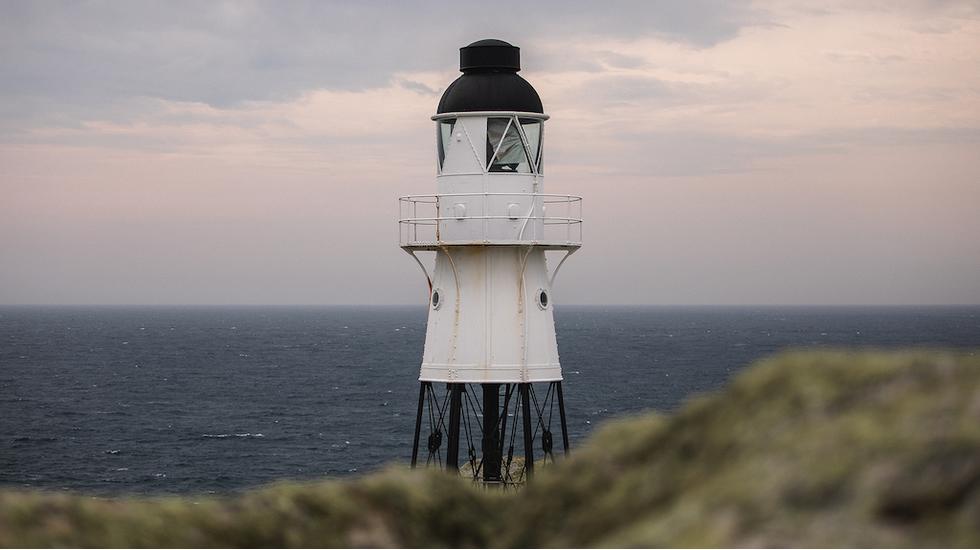 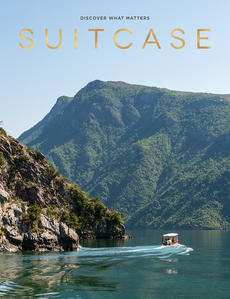 From From below, Bishop Rock Lighthouse looks like a brutalist fairy-tale tower. Think pinprick windows, granite walls the same colour as the churning sea below, a front door that must have once been a vivid green, now a seasick grey. I imagine we must be the same colour as our boat rolls wildly in the fierce easterly winds.

What was once the smallest inhabited island in the world now stands empty for most of the year. It has been this way since 1992, when Bishop Rock became automated through the Trinity House automation programme.

"It was like going down a tunnel that got narrower and narrower," former keeper Dave Appleby tells me. He was one of six keepers to work on the last manned lighthouse, North Foreland Lighthouse in Kent. "The lighthouses became automated one by one. When Trinity House organised a ceremony in November 1998 to celebrate the automation of the last manned lighthouse, it was 32 years to the day since I'd become a keeper."

Lighthouses have worked their way into popular culture and captured the imaginations of countless artists. My father used to read me Ronda and David Armotage's The Lighthouse Keeper's Lunch at bedtime, a story about a keeper who lives on a lighthouse with just his pet cat for company. Day after day, his wife packs his lunch to send on a pulley, and each day his lunch is stolen by seagulls. Like most children, I was woefully ignorant of Dad's life before I was born. I didn't realise that the book had bearings on his own life. As a Younger Brother [a member of the maritime fraternity] of Trinity House, he was a guest onboard the vessel that took an annual six-week tour of the UK's lighthouses. Unlike in The Lighthouse Keeper's Lunch, the towers were home to three keepers at a time: a Principal Keeper, an Assistant Keeper and a Supernumerary. I doubt any of them took their cat.

Our boat launched from St Agnes, the southernmost inhabited isle of the Scillies, and home to Bishop Rock's predecessor. The island's 17th-century lighthouse was the first to be built on Scilly, whose treacherous waters had already claimed dozens of ships. For the last century the lighthouse has been a private residence. It's homely looking, its hedges exploding with agapanthus. We'd enjoyed a pint at the sole pub on St Agnes, The Turk's Head, the beer garden bathed in sunlight and the sea flat and iridescent. Bishop Rock, in contrast, seemed to sit under a storm cloud.

The legacy of the Scillonian lighthouses is everywhere. In Hugh Town, the thimble-sized capital of the islands, tourists wearing bucket hats and Breton stripes shoulder tote bags painted with gaudy cartoon lighthouses. Pop-up stalls outside farms sell greeting cards decorated with lithographs of lighthouses. Locals quaff pints at the Bishop & Wolf, named after Bishop Rock and Wolf Rock, between Land's End and the Scillies. The stretch of water between these rocks is a well-beaten path for Penzance Helicopters, who had taken to the skies and flown us over that morning.

On terra firma, visitors hire bikes to circumnavigate Tresco, sipping cocktails at the Ruin Beach Café and marvelling at the Abbey Gardens, kaleidoscopic with light and colour like a stained-glass window. Locals catch shrimp in Hugh Town harbour. By late autumn, only hardy locals and a handful of artists who stay to paint winter storms will be left. Rewind 30 years, and there would have also been the lighthouse keepers.

Bill Arnold arrived for his first, month-long duty at Bishop Rock during the Christmas of 1988. His arrival coincided with one of the worst storms that he was to experience. "The first wave hit the tower and it trembled," he tells us. "As it was designed to do. The second wave came in so suddenly and hit with such force that the whole tower shook. We ran up to the light room. It was awash with mercury [it was common practice for mercury baths to be used to reduce friction in the light-rotating mechanism]. There wasn't anything to clean it up with - you don't take much to a lighthouse. We swept the stuff up with a dustpan and brush."

Before offshore lighthouses had helipads, keepers, technicians and brethren of Trinity House alike were winched from their boats into the lighthouse.

"I remember climbing 40 rungs up the outside of a tower in the middle of the Irish Sea. It could be pretty physical," recalls Captain Sir Malcolm Edge. As Deputy Master of Trinity House and an Elder Brother, he could take a guest on the fraternity's flagship, the Patricia. Several times, he invited my father.

"We'd be in full Trinity House garb for the winching," reminisces Bill. "And it was the messiest part."

"When you were on the tower, there was so little space that I almost forgot how to walk in a straight line," Dave says. "You walk in corkscrews the whole time, up and down metal rungs. When I came ashore my jeans would have holes above the ankles where they'd caught on the rungs."

It wasn't just the stairs that were curved - the beds were, too. Lighthouses weren't built to provide home comforts: the 'shower' was a washing-up bowl. The night shift (midnight-4am), when only one keeper was awake, was the best time to shower - a strip-wash using a flannel, standing in the bowl. Storing food was another problem. With no fridges, fresh food was in short supply.

"Vegetables could last up to 10 days. We'd store them on the windowsill so that the salty air kept them fresh," explains Bill. "We ate lots of roast dinners. Whoever was on the morning shift (4am-midday) would cook. It was always served with inch-thick onion gravy and followed by plum duff [pudding]." For Dad and Malcolm, life onboard the Patricia was rather more luxurious.

"We had stewards who laid out our clothes for dinner," says Malcolm. "We always got dressed for dinner, and had drinks each evening." At breakfast, the spread included 17 different types of marmalade.

Pre-lockdown, lighthouse keepers already had creative ways of dealing with boredom in confinement. "Lots of keepers made ships in bottles," Dave recalls. "One man made model lighthouses inside light bulbs."

"Another keeper made his own kites for fishing using old lantern curtains and rocket sticks," says Bill. "He'd attach a line to them and I'd hear a tap-tap-tap on the window as I was cooking. I'd reel in the line and fry them straight up for lunch. On the Channel Islands, there was a bloke who caught so much crab and lobster that it was all we ate for almost two weeks. I was sick of crab and lobster." Tucking into fresh seafood at the Hell Bay Hotel that evening, our picturesque hotel on Bryher's wild and rugged west coast, I wonder how anyone could get sick of crab and lobster.

When the keepers came ashore, they were very sociable. "I'd go straight to the pub," grins Bill. "And we'd always have big parties." I imagine them both with pints in Scillonian pubs, laughing and struggling to walk in a straight line on their first day back ashore, unsure whether it was a consequence of the spiral staircases of the lighthouse towers or too much beer.

The lighthouses remain a significant part of both men's lives. Dave maintains a lighthouse at the end of Tynemouth Pier, while Bill rents out holiday cottages at Cornwall's Pendeen Lighthouse, his final posting.

For the technicians who work on lighthouses today, working life hasn't changed much. Nick Chappell started working on lighthouses in 1986, when many were still manned, and sometimes has to spend 21 consecutive days in situ. As with the keepers, there are three of them onboard at any one time, a combination of technicians, electricians and mechanics.

"It's cold and damp when we arrive at an offshore lighthouse," says Nick. "In the old days, when the keepers were there, it would be warm and inviting. The Aga would be going and they'd offer us tea and biscuits upon arrival. Now the first thing we do is whack on the heating, open the windows and clean off the mould that has collected on surfaces."

Round Island, which we see from the ruins of King Charles's Castle on northern Tresco, is Nick's favourite to work at. There's space to walk around, unlike at Bishop Rock, just visible on the horizon, which is as skinny as a toothpick.

"Occasionally, the weather is so bad that the helicopter can't get to you," Nick tells me. "Once, in thick fog, we were stuck off shore for 23 days instead of 21. We'd finished our work and packed our belongings. Unrolling sleeping bags on our bunks again was a horrible feeling."

Confinement aside, life on a lighthouse has become more comfortable. There are showers and flush loos. There's a TV and DVD player. I wonder if, in years to come, parents will read The Lighthouse Technicians' Lobster TV Dinner to their children with the same misty-eyed nostalgia that my father had.

This story is dedicated to Anna's father.

A return helicopter flight from Land's End to St Mary's with Penzance Helicopters costs from £259pp, and boats with St Agnes Boating run regularly to Bishop Rock. A night at the Hell Bay Hotel on Bryher costs from £145pp in shoulder season.

To plan your trip to the Isles of Scilly head to visitislesofscilly.com