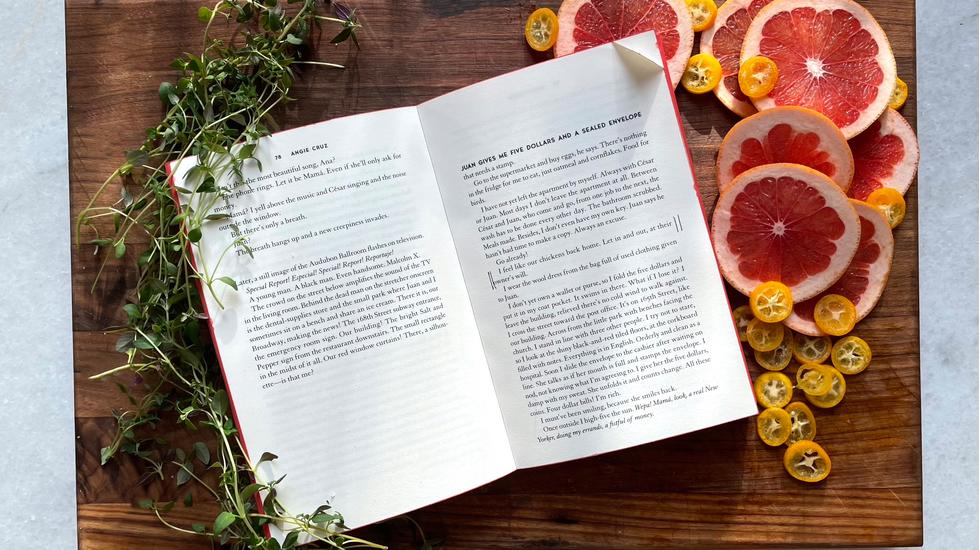 Both Both food and literature have an incredible capacity to immerse us in alternative realities and help us understand perspectives other than our own. Together - by interpreting books in a culinary form - they nourish our minds and bodies.

While our ability to travel is limited, reading helps free us from our routines and surroundings. Exploring the idea of "at-home escapism", I have created recipes in response to food scenes found in four of my favourite novels. These dishes reflect not simply what the characters are eating, but the narrative, themes and settings of each work.

Murakami is known for describing hunger, cooking and eating in his writing - often a description of an everyday dish or ingredient is full of poignant meaning. In Norwegian Wood, the main character, Toru Watanabe, reflects on his tumultuous university days, peppered with uncertainty, untimely deaths and his simultaneous love for two women. One of them, Naoko, suﬀers nervous breakdowns and is emotionally volatile, while the other, Midori, is outspoken and vivacious.

I'm focusing on the scene in which Midori brings Toru to the hospital, where her father is being treated for cancer. He is weak and frail - "his body was like a dilapidated old house… which awaited now only its final demolition" - and he initially refuses to eat anything oﬀered to him. When Toru starts to eat a cucumber dipped in soy sauce and nori with earnest, unabashed enthusiasm, it motivates the patient to eat too. As the two of them crunch away, Toru proclaims: "It's good when food tastes good. It's kind of like proof you're alive."

In my recipe below, the delicate taste and supple texture of raw scallops represent this touching exchange and the fragile state of Midori's father, who dies five days later. Norwegian Wood revolves around death and its repercussions. The delicate rawness of the crudo, much like the simple, salty cucumber, is a small burst of life, a momentary relief from the loss and grief that otherwise weighs so heavily throughout the book.

Furikake seasoning for garnish (a savoury mixture of dried, ground fish, seeds and nori seaweed - choose a variation without egg as this sometimes is added too)

When it was first published in 1955, Lolita shocked and disturbed many readers - its detailed, harrowing narrative of middle-aged Humbert Humbert's passionate infatuation, seduction and sexual corruption of 12-year-old Dolores "Lolita" Haze remains one of the most controversial books to present day.

In this cocktail, Mela d'Alba (a negroni with apple brandy), sweet calvados is countered by the bitter potency of Campari. It refers to the first time Humbert sexually approaches Lolita as she is eating an "Eden-red apple" - they wrestle over this which leads to her draping her legs across his lap. This fruit is rich with symbolic meaning revolving around temptation, sin and loss of innocence. Despite the reader being repulsed by Humbert's twisted, obsessive adoration, his undeniably beautiful prose and sincerity draws us in, unexpectedly eliciting empathy from the audience. The bittersweet taste of the drink speaks to the nature of the entire aﬀair: filled at once with pleasure, corruption and loneliness.

When Nicholas Urfe, a young Oxford graduate, arrives on a Greek island to teach English at the local school, he is immediately captivated by the landscape. However as he is bathed in sunlight he notices that, while "supremely beautiful… I felt it was hostile. It seemed to corrode, not cleanse". This hints at how Nicholas's world will soon be totally manipulated - dipping in and out of Greek mythology, illusion and theatre - all orchestrated by the mysterious Maurice Conchis, who owns a vast, prosperous estate on the island.

Conchis invites Nicholas to stay with him for the weekend, where he proceeds to entrance him with stories of his past after a dinner of "small fish cooked in wine". This is the inspiration for this recipe of sardines marinated in an aromatic, infused olive oil and red wine vinegar. The distinct briny flavour of sardines recalls the book's seductive island setting and the "shimmering mirageous surface" of the surrounding sea. Slowly pour the oil over the fried fish until they are completely submerged by the viscous liquid - it evokes the insidious way in which Conchis gradually envelops Nicholas into his elaborate "god game".

To truly be transported into the world of The Magus, enjoy this dish with a glass of retsina, the pine-flavoured, light amber wine often being sipped by characters throughout this novel.

4 garlic cloves, in their skins and smashed

Ana Cancion is only 15 years old when she marries Juan Ruiz, who is 17 years her senior, and is taken from the Dominican countryside to live in New York City with him. Ana's youth and sexuality are commodities that provide financial security and citizenships for her family - her story speaks for similar experiences of many other first-generation immigrants in America.

Cooking turns out to be Ana's only form of power: it brings her solace when she is lonely, is her source of income when she starts selling food to factory workers and is how she enacts revenge as she cooks a street pigeon for her abusive husband in an attempt to give him food poisoning.

This braised-chicken dish is not traditionally Dominican but is designed to depict Ana herself. The overall viridescent hue of this dish, created by the corriander marinade and peppers, represents Ana's most alluring feature - her green eyes which are deemed "a winning lottery ticket" and "shinier, more valuable, to be possessed" - recalling how her body and femininity are monetised. The accompanying ingredients derive from the frequent descriptions of the chicken dishes that Ana cooks, inspired by the meals taught by her mother that are full of nostalgia for her home.

1 bunch corriander (save a few sprigs for garnish)

1 1/2 tbsp whole coriander seeds, toasted and roughly crushed with a mortar and pestle

Imogen Kwok sees food as more than a basic human necessity - it moves us emotionally and is a powerful means of communication. She uses culinary practice as an artistic medium to encourage comprehension through consumption. Her projects include interactive dinners, edible installations and bespoke recipe creation; her work is a curated stimulation of all the bodily senses.

Special thanks to Native & Co for supplying the props. @nativeandco