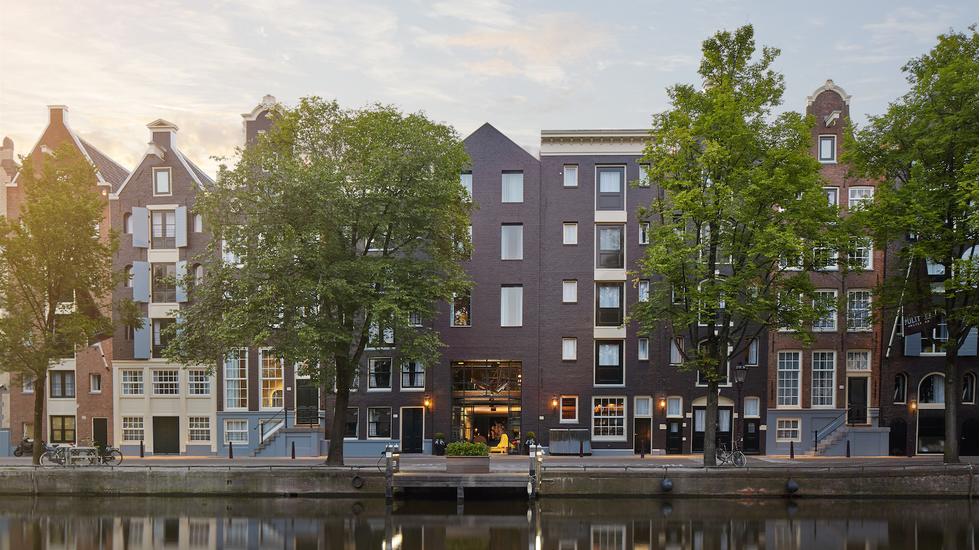 "This "This is one of the oldest parts of the city. You're not really an Amsterdammer unless you're from the Jordaan," smiles local driver Mike, when asked to describe his neighbourhood. Flanked by canals, this was once the poorest part of Amsterdam, though you'd hardly know it from the hip shops and cafés jostling for position here today.

The Pulitzer Amsterdam's origins date from 1960, when Peter Pulitzer (grandson of Pulitzer Prize founder Joseph) first arrived in Amsterdam and bought 12 dilapidated houses along the Prinsengracht and Keizersgracht canals of the Jordaan district. He kept purchasing, and, ultimately, the Pulitzer Amsterdam was born in 1970 as the city's first five-star hotel, constructed from 25 historic properties, linked together by a maze of quirky passageways.

Now, 52 years later and following an extensive renovation and refurbishment programme, the hotel remains a benchmark five-star stay in the city. Architect Jacu Strauss (who slept a night in every one of the 225 bedrooms to feel out their individual character during renovations) has managed to sensitively marry contemporary design with the hotel's cultural and literary heritage, paying homage to the former inhabitants throughout. Glints of copper in Jansz. - the hotel's bright restaurant - are a nod to coppersmith Volkert Jansz, the building's original owner, while the piano suspended from the ceiling and trumpets lining the walls celebrate the area's thriving live-music scene of the 1960s.

It was this scene that first propelled the Jordaan into the city's creative spotlight. These days, the neighbourhood's burgeoning art scene is what's drawing the biggest crowds, thanks to spaces that range from established pop-surrealist gallery KochxBos and antique shop Zebregs&Röell (run by Amsterdam's youngest fine art collector, Dickie Zebregs), to burgeoning community art spaces like Droog and Paleis.

Immediately surrounding the hotel is Nine Streets, a network of boutiques and vintage shops loved by the creative types who gravitate here. More a move towards circular fashion than a drive to set trends, the uptick in vintage stores in the neighbourhood is described by Sa'id, of family-run Tailors of Amsterdam, as "a bid to encourage people to upcycle, rather than buy first-hand". Other vintage emporiums worth stepping into include Episode, Bij Ons and Terra, which sells quirky secondhand shoes including traditional Spanish boots and espadrilles.

While strolling through the neighbourhood, use the spire of the Church of Our Lady as your guiding star - you'll soon find your way back to the Pulitzer, which stands on the same street as this spectacular landmark.

Following the runaway success of the brunch menu at its sister outpost, Little Collins, Collins offers a grown-up roster of natural wines and an all-day menu of small plates. High fives, too, for its zero-waste ethos.

Easy to spot, thanks to the queue outside, Winkel 43 is a café and bar hugging the left side of the Noordermarkt. Make it your coffee-and-apple-pie pit stop after a morning spent wandering around the market.

The stomping ground of choice for foodies, this Saturday farmers' market sells fresh produce from local greengrocers, cheesemongers and butchers. On Mondays, the site is taken over by antique vendors.

Museum of the Canals

Delve into the history of Amsterdam's canal houses at the Museum of the Canals, an interactive waterside exhibition space featuring films and audio about the city's traditional homes.

Now with three outposts, of which this was the first, Daily Paper is one of only a small handful of Black-owned fashion outlets in Amsterdam. Come here to shop for covetable street style and activewear.

An urban concept store and events space, X Bank showcases local crafts, art and clothing exclusively made by Netherlands-based designers in an eccentric old building in the heart of the Jordaan.

Discover quintessential Dutch elegance with a stay at Pulitzer Amsterdam. To find out more, visit pulitzeramsterdam.com