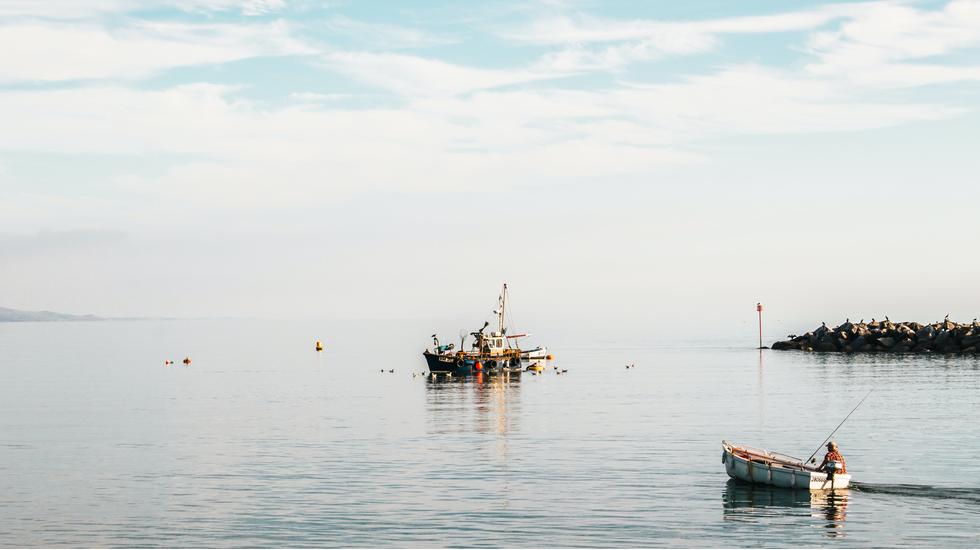 This This pocket-sized town was thrust onto the world stage in 1814 when a young Mary Anning discovered the first complete ichthyosaur skeleton on its shores and became the poster child of palaeontology. Fast forward a couple of centuries and the so-called "Pearl of the Jurassic Coast" hits the headlines again courtesy of 2020 biopic, Ammonite, starring Kate Winslet (as Anning) and Saoirse Ronan.

These aren't Lyme's only flutters with fame. In 1685, the Monmouth Rebellion that attempted to overthrow James II began here. More 100 years later, Jane Austen's Persuasion describes Louisa Musgrove falling from The Cobb. In the 60s, John Fowles used the town as the setting for The French Lieutenant's Woman, later adapted into a film starring Meryl Streep.

Yet for all its stardom, Lyme's vinegar-tinged coastal charm remains uneroded. In Lyme Bay, the 13th-century Cobb arcs out into the English Channel. Battenburg-coloured townhouses and Regency villas are framed by beach huts, shingle shores and limestone cliffs that crumble to reveal fossilised shells and scattered bones of prehistoric creatures. Community life revolves around a calendar packed with knees-ups: a fossil festival and Jazz Jurassica in spring; morris dancing and water polo in the sea come summer.

Beyond the bustling harbour, independent cafés and shops hug Broad Street, the quiet thoroughfare that draws the town inland. Until 2020, chef Mark Hix's eponymous townhouse and restaurant were the London-export headline grabbers for visitors here, but since their closure, other design-forward boltholes and sea-to-fork eateries have quickly assumed their place in the limelight.

A three-hour drive from London (or two hours and 40 minutes by train to Axminster railway station, followed by a 15-minute cab ride), Lyme Regis is prime territory for a long-weekend break or a pit-stop on a Jurassic Coast road trip - Lulworth Cove, Chesil Beach, The Undercliff nature reserve, Charmouth and Beer are all worthy additions to any itinerary.

Fuelled by pints of cold-water prawns, we've scoured East Cliff Beach for ammonite, sifted through coastal knick-knacks on the high street and washed down Dorset knobs - the local biscuit of choice - with local mead to bring you the best of Lyme Regis. Dive in.

A self-proclaimed “sanctuary by the sea”, this Regency-style bolthole served as a private home up until 2014. Sheltered from the breeze that bumbles in from the Channel, and a five-minute amble from the high street’s boutiques, it draws guests with spacious, individually designed rooms – all waxed-pine floors, ammonite greys and work by West Country artists – as well as the kind of breakfast fare you’d expect from a Melbourne eatery, not a West Dorset B&B. Come evening, help yourself to locally made Conker gin at the honesty bar before setting up camp with a blanket on the veranda.

A 10-minute drive outside Lyme Regis, this former hay barn was near-derelict before restoration began in 2013. With walls clad in wide, blonde-wood panels and a pared-back aesthetic, its conversion pays homage to the building’s heritage and yet has a smack of Scandi suave. Fire up the barbecue on the sun deck as herons swoop over the pond opposite or, in cooler climes, seek refuge in the warmth afforded by the Aga and wood burner. The barn sleeps four people (and two well-behaved dogs); book into The Store for an intimate retreat for two.

A pebble’s toss from the harbour, this 19th-century, Grade II-listed restaurant with rooms was treated to a nine-month makeover. Downstairs, an informal pub – perfect for pitching up with a bloody Mary and Sunday rags – gives way to a buzzy restaurant that dishes up Naples-style pizza piping from the oven and locally caught seafood. Upstairs, the nautical flavour continues in its three rooms courtesy of exposed-brick walls, fisherman-rib blankets and seafaring trappings – the steampunk pendant lights are an especially nice touch. For views across the Cobb, opt for the King Luxury room.

Just 100m from the water’s edge, this 16th-century inn charms guests with the kind of quirky in-built features that only come with age. Each of the four rooms has its own character: The Duke of Monmouth benefits from a Tudor-style four-poster while the Oscar Wilde (the dramatist is believed to have stayed here on a tour of the West Country) is a more dandy affair. Breakfast is thoroughly cheerful, with yellow-gingham tablecloths backdropping locally sourced full-English platters and homemade jams. Should Lyme’s skies turn grey, curl up by the wood-burning stove in the snug.

Home to the dowager Countess Poulett in the early 1700s, this hotel is more stately than cool, though the vibe is far from stuffy. Rising from the cliffs, it offers fantastic views across the manicured Langmoor and Lister Gardens to Lyme Bay – just make sure to book a sea-facing room. Lunch in the Orangery is lovely (don’t forget to peer down the glassed-over well), though we recommend saving room for champagne afternoon tea on the terrace.