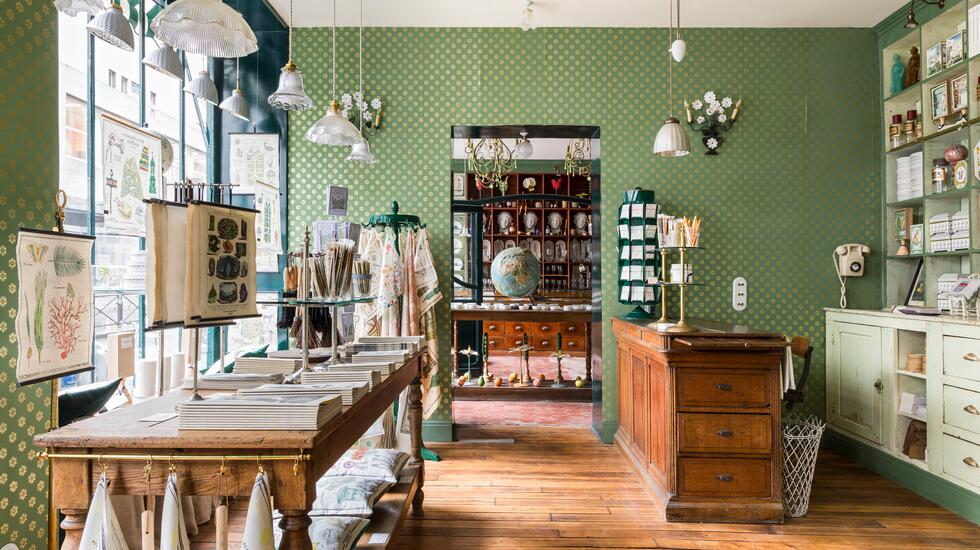 Quaint, Quaint, but with a knowing wink, meticulously ordered, but alive with a bubbling stream of locals stopping by to say bonjour, fragrant with the smell of freshly cut grass, despite being slap-bang in the heart of Paris' buzzy Saint-Germain-des-Prés district, artist Marin Montagut's boutique is a bricks-and-mortar celebration of French joie de vivre. To step inside and not find yourself wide-eyed, grinning like a kid in a candy store? Impossible.

"It was my dream," Montagut says of the 2020 opening of his Rue Madame shop, which came hot on the heels of a wildly successful Bon Marché pop-up, and which is housed within a former upholsterer's atelier, behind a double-glass-fronted facade inscribed with the words "Purveyor of All Kinds of Objects". "It's a challenge to take something very old-school and transform it into something desirable."

Born in Toulouse to antique dealer parents, the joy of collecting was already coursing through Montagut's veins when he arrived in Paris, at the age of 20. "It was big love - I knew it was my city," he says. "I knew nobody, so I explored the back streets alone - the flea markets, second-hand shops, restaurants, cafés - discovering secret places, making watercolours of each address."

These watercolours would form the basis for the map-guidebook hybrid Bonjour Paris: A Fine Selection of Unique Spots for a Genuine Paris Experience, which has since been joined by Bonjour London and Bonjour New York. The book also spawned a French TV show written and presented by Montagut, who, rather like a modern-day Peter Pan, dressed in his favourite colour ("green is so beautiful, the way it changes with the light"), flew through the capital on his trusty Vespa, taking viewers on a magic carpet ride around the under-the-radar establishments featured in its pages.

Among the gems the watercolourist pays homage to in the book are the Académie de la Grande Chaumiere, where, since 1904, students - including Serge Gainsbourg - have enrolled to practise their art freely, with teaching based on nude models; Yveline Antiques, which, since 1954, has been attracting bargain hunters and curious passers-by alike; and the Graineterie du Marché, the location of Paris' most distinguished covered food market for centuries.

"Bonjour Paris was the beginning of the story," he says. "It was my first item."

A creative corner, left, and a table topped with watercolours.

To walk across the hundred-year-old oak floorboards and painstakingly restored terracotta tiles of Montagut's emporium, browsing his ever-growing collection of homeware and objets d'art, is to be swept into the 38-year-old artist's poetic world of whimsy - one inspired both by the cultural heritage of his native France and his travels around the world. Botanical and ecclesiastically inspired charts and paintings adorn the walls; shelves and tables are artfully arranged with handmade enamelled porcelain tableware, recycled, mouth-blown glassware, cushions, silk scarves, stationery, scented candles ("freshly cut grass" being the newest addition to the range) and antique curios and fripperies galore. There are old-world-style astrological globes, vintage pharmaceutical jars, a set of watercolours Montagut created in collaboration with Charvin, Picasso's paint supplier of choice, felt baubles - one iteration, in the shape of a teacup, embroidered with the slogan "votes for women" - prayer cards and customisable keepsakes. "Our Paris street sign drinking glasses are inspired by antique glass and each one is painted by hand in our Montmartre studio," explains Montagut. "You can have one personalised with the name of the street where you live, or the street where you first kissed - your street tells a story."

One of the beuatiful hand-crafted books, left, and a happy mish-mash of artwork.

Our suggestion for that hard-to-buy-for someone? One of the entirely handmade, hand-painted and individually numbered "books of secrets" - modelled after those used in 18th-century France, with a recess cut into the pages in which to hide "small intimate wonders". Or one of the "marvel showcases" - box-like miniature masterpieces featuring a glass pane over a papier-mâché structure decorated with Montagut's favoured motifs. Sprinkled liberally around the shop, these include four-leafed clovers, hearts, crowns, religious iconography and the Eiffel Tower. Cats also appear in their multitudes.

And who doesn't love to hunt for them? At 48 Rue Madame, a world of wonder awaits.

To discover more of Marin Montagut's work and to shop online, visit marinmontagut.com