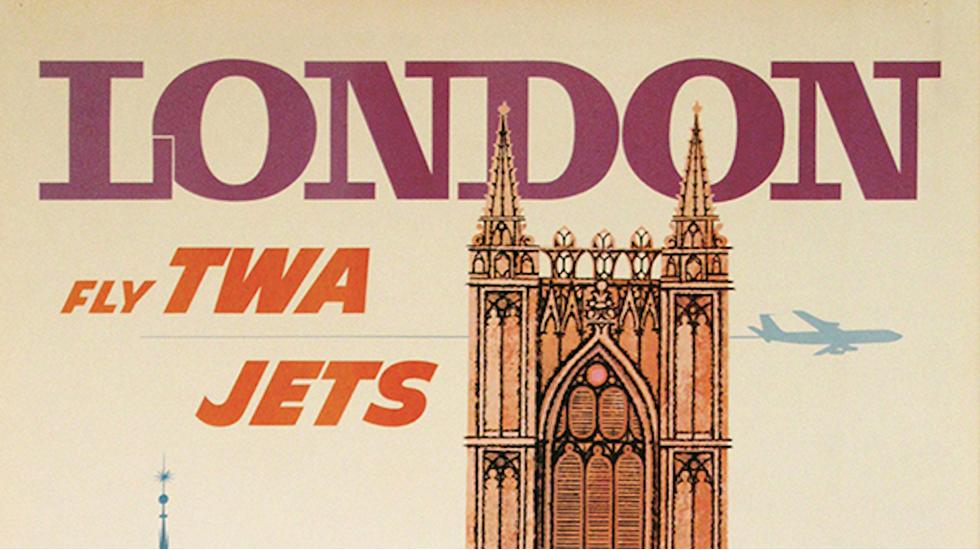 Old-school Old-school tourism posters are back - and not just Blu-Tacked to students' walls. These vibrant calls to adventure rake in serious money. In 2016, a 1934 print advertising Gstaad sold for £64,000. Two years earlier Henri de Toulouse-Lautrec's Moulin Rouge lithograph went under the hammer for £314,500. From the Victoria and Albert Museum in London to Washington DC's Library of Congress, collections of such pin-ups number in the thousands.

Of course, they were never meant to be high art. Consider the lifespan of Leonardo da Vinci's The Last Supper compared to that of a Brighton Beach poster which, after a few weather-beaten weeks, is torn down or covered up by its successor. Unlike paintings in a museum, posters can be easily copied and disseminated for mass consumption. Plastered across picket fences and brick walls, stations and tunnels, they are only ever intended as promotional ephemera.

Yet in today's burgeoning vintage poster market, those themed around travel are among the most sought after. But why? If posters are mementos of happy vacations, how can we justify those from places or eras we've never encountered? Perhaps they're merely an affordable way to decorate our home. Perhaps we hold them up out of reverence for the past. Or perhaps we use them to escape from the now.

Tracing the evolution of the travel poster cannot be done in isolation from the deep-rooted history of poster-making. As long as there has been something to sell, man has found a way to promote it. Ancient Egyptian business owners chiselled their profession on the side of their shops. In Rome, terracotta slabs advertised bath houses and taverns. The invention of Gutenberg's printing press in the 1440s resulted in handbills for Shakespeare's plays, while the game-changer came in the late 19th century with the streamlining of chromolithography by Parisian Jules Chéret, the father of the poster. His three-stone printing technique enabled economical yet eye-catching publication and ushered in the modern age of advertising.

By the turn of the 20th century, the poster craze had consumed Europe and the US. Busy thoroughfares became veritable galleries with placards for bicycles and bullfights, elections and absinthe. Such was the demand that fine artists - Henri de Toulouse- Lautrec, Alphonse Mucha, Eugène Grasset - pursued the medium in earnest. Exhibitions of posters were held. Collectors' clubs formed. Art dealers stole banners or bribed those employed to paste them up. Periodicals recorded the latest poster developments. Young lovers sent each other symbolic prints.

Small wonder that from the late 1800s to the early 1970s posters and print ads were just the ticket for travel companies to attract customers. Whether designed for Pan Am or the Orient Express, posters charged with air and glamour came to define the language and trends of tourism. Indeed, the work of the prolific American poster artist David Klein spearheaded the jet-set lifestyle - in 1957 his New York City design for Trans World Airlines was the first of its kind to become part of the Museum of Modern Art's permanent collection, thus cementing the elevation of the poster from ad to art.

Viewed as historical artefacts, travel posters offer a window into the past. They reflect the ebb and flow of artistic styles, from Art Nouveau to Art Deco, Cubism to Postmodernism. "Pop Goes the Poster" declared San Francisco's Post in 1968 in response to the latest psychedelic craze. They are relics of shifting societal values too. Later prints began to sell sex, humour and fear. Despite cross-pollination, distinctive national styles and characteristics became apparent. France was all about cafés and cabaret, while the Brits pinned up sunny images of the seaside and circuses. Dramatic Italian posters focused on fashion and opera, while German trade fair advertisements took their cue from medieval design.

What's more, travel posters let us trace the footprints of technological change. They bear witness to the introduction of photography in the 1920s and computer graphics in the 1980s. Indeed, posters' mid-century decline in popularity can be attributed to the new era of mass-market magazines, radio and television. Early pieces often displayed the mode of travel too; once newfangled steamships, trains, Zeppelins and planes were as exciting as far-flung destinations.

With 21st-century eyes it's easy to be wonderstruck by the Golden Age that travel posters depict. But will our great-grandchildren romanticise self-driving cars the way we do steam trains? Why do we perpetuate a rose-tinted view of the past? It speaks to the power of wishful thinking that those pearly smiles and wholesome families in Britain's 1950s seaside posters proliferated at a time when the country had lost nearly half a million people in the Second World War and food rationing was yet to end. In a show of the Western narrative's power, 1920s posters with hula girls in coconut bras and grass skirts beckoned holidaymakers to the Land of Aloha while silencing the decimation of the indigenous Hawaiian population. It's an idiosyncrasy played upon by Unknown Tourism, a series of vintage poster-style images by Expedia UK which pays tribute to creatures - Steller's sea cow, dodos, the golden toad - now extinct thanks to human activity.

Whatever the reality, in our mile-a-minute age of existential and environmental threat we gaze back towards an era that, in our collective imagination, is perceived as being safer and simpler. While we stride into the future, one foot remains rooted in the past, seeking comfort in the familiar and ensuring we don't lose some essential part of ourselves. It's telling that posters popular in the vintage travel market aren't just those for glamorous destinations. Today many people may holiday overseas, but posters for the less-fashionable Blackpool, Skegness and Bognor Regis regularly sell for around £5,000 at auction. They express not just our desire to escape our immediate physical environment but our temporal one too. These vintage pin-ups are a way of saying bon voyage to the present.

It's unsurprising that this wistful mindset is being exploited by savvy marketers. Nostalgia sells and the travel industry has shrewdly jumped on the bandwagon. Both SpaceX and Nasa have reimagined interstellar destinations - Mars, Europa, Titan, Jupiter, Enceladus - modelled on travel posters from the 1940s and 1950s. In celebration of its centenary, the US National Park Service created a series of ten prints based on the iconic posters by the Works Progress Administration under FDR's New Deal. In 2017, luxury travel brand Belmond launched the Art of Belmond campaign, taking its cue from Golden Age images of yesteryear. A series of stickers and posters for its hotels, trains, river cruises and safari lodges evoked what its Senior Vice President for Brand and Marketing, Arnaud Champenois, deems "contemporary nostalgia".

In the same way that bell-bottom jeans and wartime slogans - "Keep Calm and Carry On" - have been recycled, so travel posters are being enjoyed beyond their expiration date. Inhabiting a liminal space between art and artefact, they hold up a mirror both to our fluctuating society and to ourselves. Perhaps we're longing for a past that never was - or perhaps we're longing for a future that can never be.