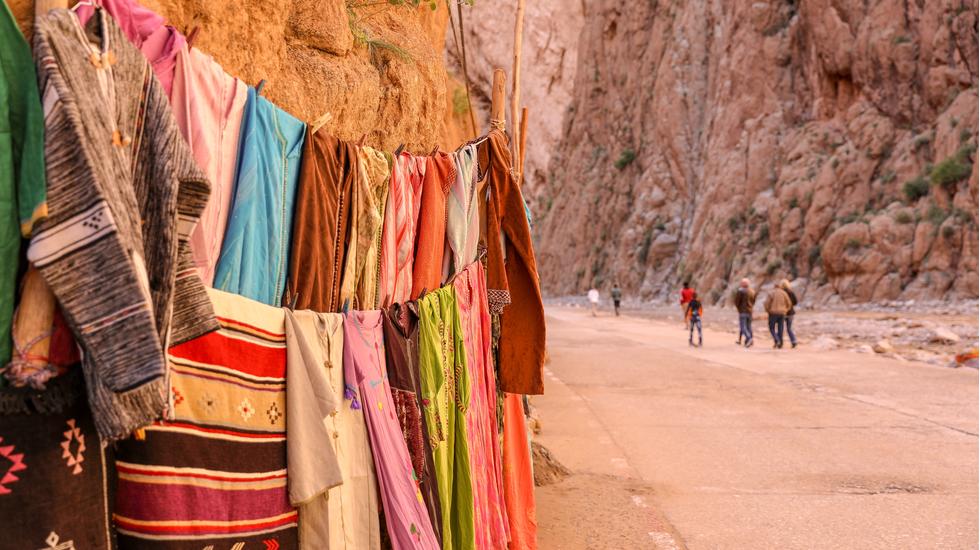 On On a recent trip to Morocco with friends, I travelled south from Tangier, through several cities and expansive desert, before winding up in Marrakech. En route, we'd built up a good rapport with Mohammed, our desert guide, so we met up with him again in the Red City.

I asked Mohammed for some local recommendations. Since two of my friends had already purchased several rugs on the trip, he rightly assumed that the group's budget was ample and suggested a visit to El Fenn riad - it's owned by Richard Branson's sister, he added. Something about this irked me. My friend then said she'd overheard that the riad where we were staying was owned by a French couple. On top of that, we were about to eat lunch at a restaurant, owned by someone who heralds from Belgium and is now based in Marseille. This didn't sit well. I'd had a wonderful time seeing Morocco, but it felt that many of the fashionable places that affluent Europeans visit in Marrakech are owned by "the West". It felt like a far cry from the rest of the country.

To me, these establishments felt like an echo of the colonial era. Still with their hands firmly in decolonised Morocco, the French and other former-colonisers are able to pick and choose what elements of the country and its culture - raffia baskets or Berber cushions and rugs - they'd like for financial gain, profiting from the increased tourism to the country.

As someone from the UK, a country that has had one of the most privileged positions in history, I feel a responsibility to understand the impact of colonisation today. Are we repeating and creating neocolonial behaviours through travel and our interactions? How can I visit places without engaging in or continuing these patterns?

I was new to encountering this problem. While I've read widely around the subject of postcolonialism and try to avoid colonial behaviours in my own engagement with places, this was my first trip outside of Europe and the US. This experience of Marrakech could be considered just globalisation, a component of neocolonialism. However, globalisation typically manifests in encountering a McDonald's wherever you visit or in the fact that many of the shops that now fill Spitalfields in London look almost identical to the shops that fill Soho, New York.

By contrast, what's happening in Marrakech is foreign gentrification. Like globalisation, it's a form of neocolonialism. This is amplified in Marrakech as the city popular with tourists taking short breaks. It's been a fashionable destination for more than 50 years, making it an easy target for foreign gentrification. I now recall that my early introductions to the city were photographs taken during the Rolling Stones' visit in the 60s and an episode of Absolutely Fabulous mocking the fashion world's love of Marrakech. My preliminary exposure to the place was already through a specific lens as seen from White Western culture.

Foreign gentrification, by which I mean gentrification by those not based in or from the destination, is revealed in the fact that a place such as El Fenn is the most referenced riad and the one that was recommended to me most during my stay. It's evident in the American-, English- and French-owned restaurants, luxury retreats and lodges that have boomed in line with increased tourism over the past 20 years, making sure that the West continues to financially benefit from visits to these places. It's seen in the beach town of Essaouira, where new houses have been built primarily to serve as Airbnbs in response to the new budget airlines operate direct flights to the area. Gentrification gets conflated with globalisation as both phenomena hail largely from the West and tend to succeed on the premise that the West is the epicentre of global culture.

A neocolonial approach to travel is evident in the journeys made by many of those from the countries of former colonisers to decolonised nations. For instance, many holidaymakers from Europe and the US tend to visit coastal Jamaican towns where many White upper-class people live, rather than experiencing the energy of Kingston. Looking back, it explains why, in primary school, my classmates' families would visit Sharm El-Sheikh over other Egyptian towns and cities.

One way to avoid such neocolonial travelling is to simply visit smaller, less mainstream cities, as opposed to gravitating towards areas filled with foreign-owned businesses. One of the main reasons we tend to do the latter is the increasingly frequent direct flights offered by budget airlines. Beyond their damaging environmental impact, these easily accessible routes have promoted overtourism and changed how we engage with certain destinations. Cities often frequented for short weekend city breaks have become subject to the problem of foreign gentrification: even in Western Europe, Lisbon and Berlin are prominent examples of this. Fleeting trips can sometimes mean that travellers invest less time in researching the places they visit, so they gravitate towards mainstream, Western-owned establishments, rather than engaging with the local area and its people. I see this happen with trips to the smaller of the Caribbean islands, too, as well as in the retreats of Bali and Sri Lanka.

In smaller cities, it is easier to tap into the character of a place and therefore enjoy a more meaningful experience. For example, the least gentrified places I visited in Morocco had been described in my previous research as boring, dingy and not worth more than a day trip. Yet in Ouarzazate, I discovered colourful circular shapes adorning the steel doors that have stayed in my mind since. The best blanket I found was not in Marrakech or Essaouira but in the storage unit of a bed-linen shop in Tinghir.

Before travelling to the Tangier, I'd read a criticism by writer and academic Hisham Aidi that the city's Beat moment had been its heyday. Tangier's famed writers such as Paul Bowles had never learned Arabic, nor befriended anyone that wasn't from the West. They lived there in a closed-off Interzone. This common portrayal of Tangier having past its prime meant that I had to work hard to convince my friends to visit the city, never mind spend New Year's Eve there, as we went on to do. Tangier was, in fact, the place where we experienced the best food, late-night cafés, music, architecture, fabric shops and hammams. It was one of our favourite places on the trip.

If you do visit a major city on your travels, the way to avoid funding foreign gentrification is to research the ownership of establishments where you intend to stay, dine and visit. Question the language used on their social media. Ask why you are drawn to the place. Are they adapting to appeal to your "Western" tastes? Indeed in Marrakech, there is no shortage of locally owned wonderful places to stay, eat, celebrate, but these often don't appear in preliminary internet searches. Opt for activities that are more likely to pull you away from the more touristy destinations. Research community-run art collectives and spaces (such as Le18 in Marrakech) where local artists' work can reach larger platforms and recognition.

As COVID-19 exacerbates many existing economic struggles on the world stage, the present decline in tourism has left many out of work. The reliance on the travel trade as the main industry for employment and income in many countries is a direct result and impact of colonialism. It is crucial that when we travel - especially White people like myself, from countries such as the UK - we spend our money supporting places run and owned by local communities or those who call that place home, and not simply supporting a Western elite that only invests in furthering its own wealth.