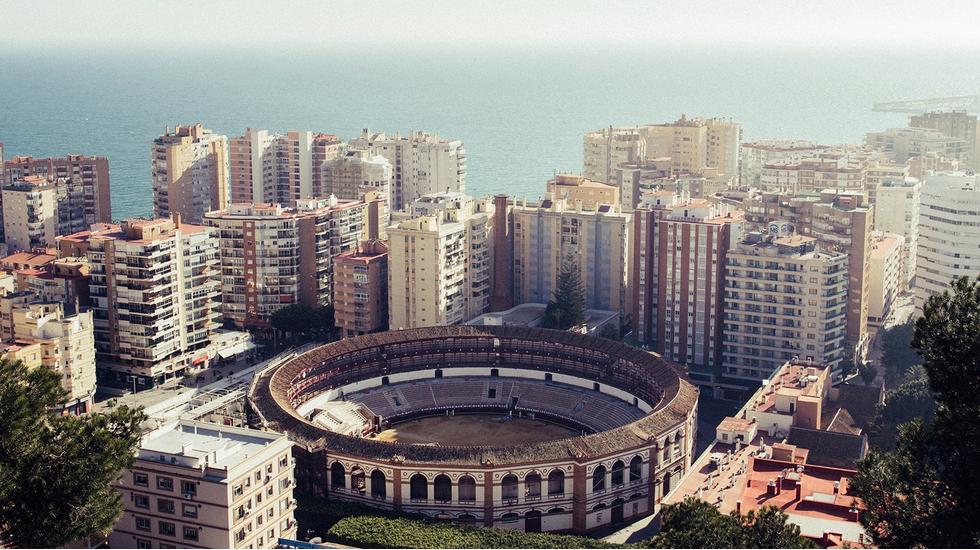 While art lovers have had their gazes fixed upon Copenhagen, Berlin and Barcelona, Malaga has quietly emerged as a cultural hub on the Costa del Sol. Navigating the streets of Soho neighbourhood, we found the best places to stay, play and admire art.

A multicoloured cube-shaped structure made of steel and glass, sits on a pier overlooking a port full of yachts. I'm in the Costa de Sol, standing in front of El Cubo, a satellite of the Paris' famed Pompidou Centre which opened in 2015.

Malaga may not seem like an obvious choice for the Pompidou's first outpost outside France, but sure enough - while many had their eyes fixed on Copenhagen, Berlin and Barcelona - Malaga quietly emerged as a hub for contemporary art and culture on the Mediterranean coast. In recent years, increased investment has breathed new life into the city, and it's beginning to attract a different crowd to that usually associated with the resorts and nightclubs of the Costa del Sol.

New arts institutions have opened all over the city, bringing an unprecedented level of global culture to the area. In this ever-evolving urban landscape, the city's creative scene is finding new ground. One neighbourhood in particular has attracted and transformed Malaga's cultural gaze: Soho.

The emergence of Soho

The revamp of the area has largely been a citizen-led initiative, with backing secured from Malaga city council. While most tourists traipse up and down Calle Larios and Calle Granada, and flood the Plaza de la Merced and the Plaza de la Constitución, Soho has become an off-beat alternative for malagueños to enjoy a meal, a drink and a stroll. Described as Malaga's barrios de las artes (arts neighbourhood), it is also an important focus for the city's cultural and creative community.

The art story of Soho begins with the Centro de Arte Contemporáneo, which sits at the south-west corner of the neighbourhood. On the building directly behind this museum, you find two enormous murals, just a couple of the many works of street art that characterise Soho.

The initiative MAUS (Malaga Arte Urbano Soho) was set up with the mission of redefining the public sphere through street art. Artists, both Spanish and international, have been invited to use the streets of Soho as a canvas to display site-specific visual creations. Artists include ROA (Belgium), DALeast (China), OBEY (USA) and Okuda San Miguel (Spain). The initiative has gradually sealed Soho's position as the place to be for emerging artists.

The rapid blossoming of Soho as an arts and culture hub has attracted further desire for investment and development, with the Teatro del Soho CaixaBank raising its curtain for the first time this October. The new theatre is backed by Malaga's golden boy Antonio Banderas, who - despite having achieved worldwide fame over the decades - has never forgotten his hometown.

For half an hour of family-friendly fun, pop into the Museo de la Imaginación, which opened last year - expect optical illusions, interactive installations and endless photo opportunities. For those with an eye for the art market, small independent galleries such as Galería JM, El Estudio de Ignacio del Río and Sala de Exposiciones Manuel Barbadillo operate in the neighbourhood.

Sitting at the border of the newly developed Soho neighbourhood and the historic centre of town is the Room Mate Valeria hotel. Since 2016, this hotel has been attracting a young, affluent and culturally curious clientele. The interiors, which have a contemporary aquamarine flavour, were designed by local studio Melián Randolph. The rooftop bar, complete with a swimming pool, draws local crowds as well as the hotel's guests to sip cocktails while overlooking the sea.

The arty Soho neighbourhood was a smart choice for this hotel not least because the Room Mate group has its very own contemporary art collection, which holds works by artists such as Daniel Canogar, Julian Opie, Javier Vázquez, Abraham Gascón Lozano, Alberto Gulías Sanmartin, Carlos Torreblanca and Carla Cid de Diego.

Turn right from the hotel's front door to explore the streets of Soho. Nearby lies the recently revamped port area, the Paseo del Parque (a boulevard lined with trees and greenery) and Calle Larios (the city's main commercial, fully pedestrianised, street). The hotel group has a second property in Malaga too, the Room Mate Larios, located on the historic Plaza de la Constitución. Here, you'll be closer to the city's other cultural attractions including the Museo Carmen Thyssen, the Picasso Museum, the Cathedral of Malaga and the Castillo de Gibralfaro.

The streets of Soho present the modern face of Malaga. The coffees and crêpes at Santa Canela or the plant-based experience at Mimo Vegan Bistro could well be plucked straight out of Shoreditch or Brooklyn, while the outdoor seating at trendy bars such as Madame Suzanne and Café de Estraperlo are ideal for leisurely afternoon coffees and evening drinks. Taste a range of craft beers at La Fábrica.

When peckish, set your eyes towards Calle Casas de Campos. Here, Mamuchis serves a global selection of food, with flavours spanning Asia and Latin America; unless your language skills are as worldly as the menu here, the waiters will most likely have to explain what most of the dishes are, but it's well worth it once you tuck in.

Restaurante Casa de Botes has been something of an establishment in Malaga for some time now, serving a stellar selection of local delicacies and wines - but last year, after almost 14 years in its previous location, it uprooted and reopened in a new, modern incarnation in Soho, called CB23. Other excellent dinner choices nearby are La Deriva and El Imperdible.

If in search of a typically Spanish lunch experience, there is the traditional Andalusian seafood at Casa Rafael. Alternatively sample the cuisine from the northern Spanish region of Asturias at nearby La Mensula. Expect both to be bustling with lively local families.

for contemporary furniture and decoration, while The Old Curiosity Shop is prime territory for lovers of antiques hunting.

Fans of Marvel, DC, manga and other comics, illustration and graphic literature might poke around Comic Stores on Calle Trinidad Grund. Over on Calle Córdoba, The Place is a go-to for skateboards, graffiti culture or a new tattoo.

Centre Pompidou Málaga - aptly nicknamed El Cubo - was originally conceived as a temporary pilot project for the institution to test the waters outside France. Thanks to its success, Malaga renewed its deal with the French institution last year, which means support and funding for the gallery in Spain will continue until at least 2025. The gallery's permanent collection includes the likes of Vassily Kandinsky, Carlos Arroyo, Robert Delaunay, Antoni Tàpies and Pierre Huyghe. The current exhibition (on display until March 2020) looks at how the idea of utopia has developed across the 20th and 21st centuries.

France is not the only one to have dropped anchor on the Andalucian coast. In the same month as El Cubo's opening back in 2015, the Saint Petersburg's The State Russian Museum opened its Malaga outpost, housed in a former 20s tobacco factory. Its current programme delves into female identity in Russia: one exhibition, (until 8 September) looks at avant-garde female Russian artists from the early 20th century onwards; another (until February 2020) looks at the depiction of women in Russian art across several time periods, as saints, queens, workers and more.

The Museo Carmen Thyssen has been another crucial player in bringing world-class art and culture to Malaga since opening to the public in 2011. Running until 8 September, the Perversity exhibition charts the figure of the femme fatale in modern art from 1880 to 1950. Paintings by artists including Gustav Klimt, Man Ray, Suzanne Valadon and Maruja Mallo tell the story of the misogynistic portrayal of women who sought freedom and power as demonic, dangerous and sinful.

Down by the shores of Playa de la Misericordia, La Térmica is a space that hosts exhibitions, screenings, workshops, talks and performances. Past shows have focused on figures including the likes of John Lennon, Madonna, David Bowie and Frida Kahlo. Catch an exhibition about Banksy here until 15 September.