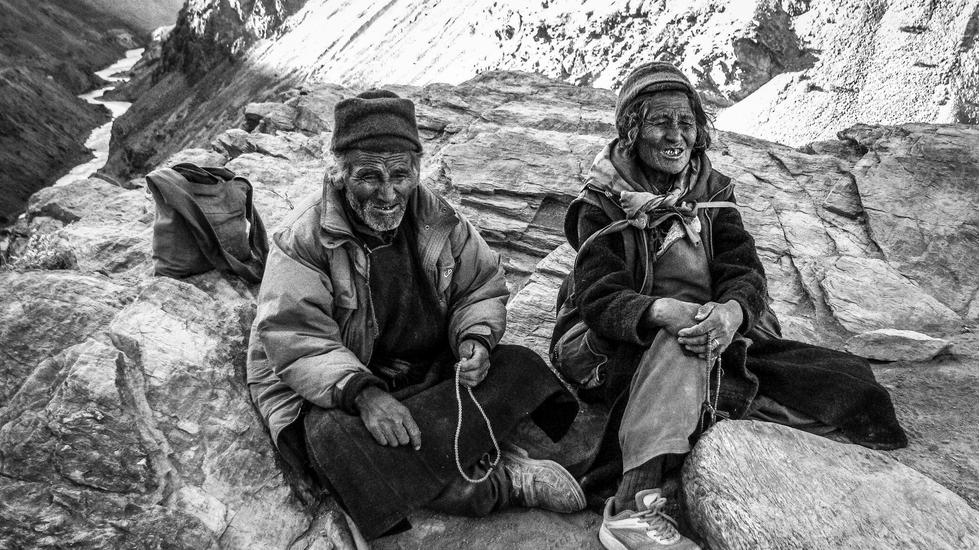 It It was summer when I met Tundup and Olivier beneath a ripened grapevine in the courtyard of Tundup's ancestral home in Dah, a Brokpa community of roughly 100 households in the Himalayas of Ladakh. The two men had met a decade before in the same village when Olivier was conducting an anthropological study of the kinship practices of the Brokpa; the two men had continued to meet in Dah over the years that followed. We soon discovered that we would all be traveling the 300 km journey towards the Zanskar Valley - me on a local bus, and them driving a tiny dilapidated Maruti Suzuki. Though a relatively short distance, it required two full days to traverse the countless switchbacks and high mountain passes. Olivier was initially hesitant to offer a seat in his vehicle to a chattering Canadian girl, though he finally succumbed, if only to save me the bone-jarring bus journey to Padum.

Crammed into his two-door hatchback, we inched our way across the expansive stretches of Zanskar's high-altitude semi-desert, where cloud shadows formed and dispersed, ancient glaciers hid in isolation and giant mountain ranges surrounded swathes of cultivated land upon which families lived in humble settlements. Zanskar is an incredibly isolated region of the Indian Himalayas, further cut off from the rest of the country by severe winters that last for half of the year. It is a land upon which the drama of the elements is deeply inscribed upon the faces of those that endure them. Ninety-five percent of Zanskaris practise Tibetan Buddhism and it was their glimmering white chortens (Buddhist shrines) that were often the only visible sign of human habitation.

By the time we reached the outskirts of Padum, the adventure we had shared solidified our friendship like the hardened dust caked upon our skin. I was invited to stay at Pasang's house - another old friend of Olivier's - and the following blissful weeks were filled with nighttime whisky-fuelled jigs and yak-butter-tea breakfasts. I started to fantasise about staying all the way through the season until the blinding white of winter; I couldn't bear the thought of our summer sojourn ever coming to an end.

His Holiness, the Dalai Lama, was due to visit Padum for three days of Tibetan Buddhist teachings. The town's meagre population of 700 people swelled to thousands, with everyone dressed in their finest traditional garments. Women were adorned in woolen capes and peraks - a turquoise-encrusted headdress - while men wore heavy robes and traditional, conical hats with the brim upturned to form two points. Buddhist monks from all of the neighbouring monasteries were clearly visible in their yellow and red robes and unusual-looking felt hats that resembled yak horns. Villagers from the most far-flung homes in the region would walk for as many as five days to attend the event; for some, it would be the first time seeing His Holiness in person and for others, it would be their last. In a place where devotion is the centre of life, there is no greater event than this.

Up until that point, Oliver, Tundup, and I had done a thorough job of exploring the entire region in our tiny Maruti, with the exception of one place: Phugtal Gompa. Shaped like a honeycomb and perched on a cliffside high atop the Lungnak river, the 12th-century monastery was one of the few remaining in Ladakh which could only be reached by foot. Legend claims that a monk once attained enlightenment in the natural cave that forms the inner sanctum of Phugtal and it is now home to 70 monks of the Gelug School of Tibetan Buddhism. It would be a three-day return journey to the monastery from Padum, and neither Tundup nor Olivier were keen to make the effort. Our local host, Pasang, convinced me that the route was straightforward enough that I could do it on my own, and that I would find ample company following the Dalai Lama's visit when the many pilgrims would return home along the footpaths. I didn't consider myself much of a mountain trekker, but I knew I had to go - both to satisfy my curiosity and to overcome my lack of self-confidence.

I was reluctant to leave my comfort zone and I felt wholly unprepared for such a harsh landscape. Combating the effects of altitude, the weight of my pack and a bout of loneliness, I set out with a number of locals returning from the teachings. Much to my dismay, however, the crowds quickly thinned out until I was completely alone; I lagged behind, struggling to breathe in the oxygen-starved environment. For the most part, the route was easily navigable except for the odd spot where it criss-crossed with other paths leading to one of the few small settlements of stone houses. Occasionally, I met a family and was amazed by the varying ages of the travellers; one couple I met were in their eighties and walked faster than I could. The only other traffic I encountered was a caravan of mules loaded with supplies - the primary means of bringing much-needed goods to communities in the hinterlands of Zanskar. As evening approached with its long, dark shadows falling on the valley, I knew I needed to find a place to stay for the night. As if the heavens had heard the prayer in my heart, Konchok, a young Zanskari man who spoke English, walked up behind me and struck up a conversation. He lived a short distance ahead and offered to take me in for the night and walk with me to Phugtal Gompa the following day.

Konchok's house was made from flat slabs of stone lined one above the other and filled in with a mixture of earth and straw. The spartan interior was similar to the outdoors in both temperature and dustiness. For dinner, we ate rice and peas with a tangy yoghurt that tasted like it had spoiled; when no-one was looking I scooped it back into the pot. Konchok's relatives were more than happy to host me, as giving weary travellers refuge was a part of their culture. Distances are so great and human habitation so sparse that having an "open-door policy" guarantees survival for those on foot. For myself, it magnified the degree of trust that pervades Zanskari society and the calibre of people that I continued to encounter.

The following morning, the sun ignited the red-rock canyon and aquamarine river as Konchok and I set off together. I felt more confident with the aid of local guidance, but not long into our day I realised that his company hindered the deep introspection solitude had offered. I didn't want to make small talk while I battled breathless moments and bargained with my perseverance. As it turned out, Konchok struggled to walk at my slow pace and so we began to drift until he was a good distance ahead of me. In these moments my solitude was restored. By the time I turned the final bend and saw the white, square structures of Phugtal Gompa built into the crags of the rock face, I had found my rhythm and connected to a deep reservoir of life-force that fuelled me forward. Though I had been aided by the generosity and compassion of Konchok and other strangers who cared for me along the way, it was the humility which they embodied that taught me how to surrender to a deeper faith in myself and my journey.

Konchok left the monastery at first light, likely reaching home before I even set off for the day. I was pleased to be alone again. I needed space to reflect on the things at work in my heart and I felt excited to be walking in the fresh mountain air once again. I could've made it back to Padum that day, but contrary to my mournful departure, I was now sad to return. So instead I walked even slower and chose to stay one final night in Pepula, sleeping on a stone bench in a tea house where a horseman graciously offered me his blanket. I would soon return to my friends with whom I would have many years of adventures to come, but at this moment, beneath the greatest carpet of twinkling stars I had ever seen, I allowed the land to infuse my soul with its song and my heart burst forth with gratitude for the people who call it home. Although Phugtal Gompa was like a scene out of Indiana Jones, the journey had become less about seeing a monastery and more about the spiritual transformation that occurred when I stepped onto an unknown path. I had become the pilgrim of my own mythic journey, one that did not necessarily have a destination but would continue for as long as I was willing to cross the threshold of my fears.