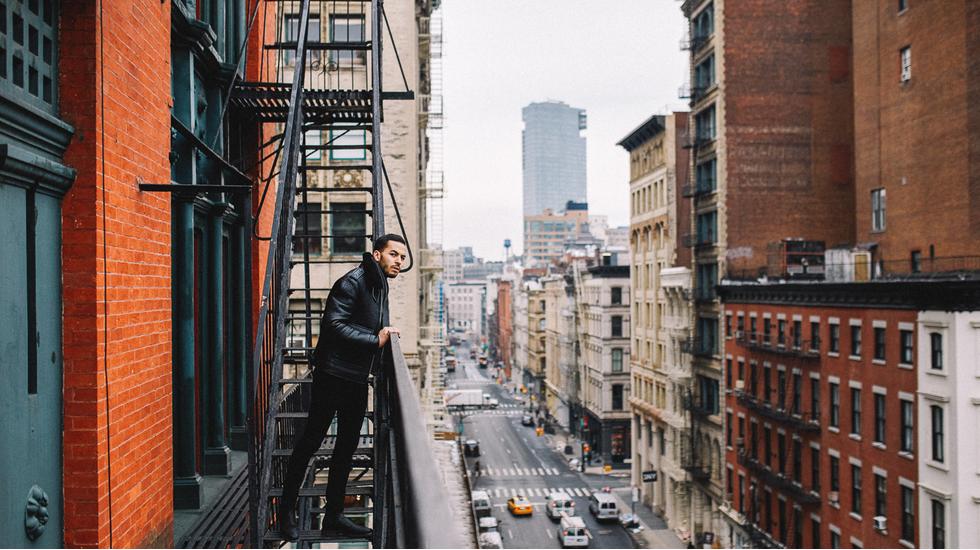 It It all started with a t-shirt. A Lizzy Stardust t-shirt (think Bowie-meets-HRH). Created in celebration and commemoration of the Queen's Diamond Jubilee, the aforementioned t-shirts (which were banned by Buckingham Palace) were a sell out. The sought-after stock moved quickly thanks to a mashup of sales techniques ranging from prohibition-style exchanges to a weekend pop-up shop. Experiencing first hand the struggle of pinning down a (very) short-term lease to sell his royal merch, Ross Bailey - founder of Appear Here - exposed a gap in the retail property market.

Appear Here's mission is to create a world where anyone, anywhere can find space to make their idea happen. "Pop-ups give brands the opportunity to connect to a moment but move on before the crowd gets bored." Ultimately, they want to make "renting a shop space as simple as booking a hotel room". Naturally, that caught our attention.

Since launching Appear Here in 2013, Bailey's quick-build idea has grown exponentially. So far, Appear Here has launched stores for over 70 per cent of the biggest luxury brands, including Chanel, Tommy Hilfiger and Marc Jacobs. Michele Obama opened a US bookshop with Penguin championing female authors of colour and, across the pond, a bookstore in London's Brixton opened shop to tackle the fact that only 1 per cent of characters in children's books are from ethnic minorities - both ventures were made possible by the ready-to-rent disruptor.

I grew up in the countryside in a small village near Buckinghamshire, which gave me the best of both London (an hour away) and the countryside. Now that I spend all my time travelling between London, Paris and New York, I need a countryside-fix to switch off.

Half my family are from Jamaica and the other half are from East London. This background has made me more aware of the importance of diversity in our cities and how powerful it is.

What is the concept behind Appear Here?

Appear Here's mission is to create a world in which anyone, anywhere can find space to make their idea happen. By listing a global network of available space online and giving people access for flexible periods, we're democratising retail. We started with one small shop in Soho; today we list thousands of spaces in some of the world's best retail destinations, from the Marais to Madison Avenue. Whether you're a major global brand or a kid with an idea, you have the same access to these spaces through Appear Here.

The Queen was a source of inspiration; tell us more…

In 2012, my best friend and I came up with the idea of launching a brand called Rock & Rule to celebrate the Queen's Diamond Jubilee. We designed these "Lizzy Stardust" t-shirts featuring the Queen with a Bowie stripe through her face. What we wanted was a store to be part of the moment. After several days of begging landlords, we managed to take over an empty store for the weekend. I couldn't understand why this wasn't something you could just do, with so many empty spaces all over London. Despite the t-shirts being banned by Buckingham Palace (which is another story), the store ended up selling out. We had people queueing outside to get their hands on our illicit Jubilee merch - I ended up selling them prohibition-style in brown paper bags.

Looking back on the experience, I realised two things. The first: how difficult it was to get access to space. The second was that offline was still relevant. Stores aren't just about buying and consumption; they are about creating a moment and connecting. A year later I started playing around with the idea of Appear Here.

But Appear Here is not a Britain-centric brand, correct?

No, from day one we set out to build a global network of the best spaces in the world. We have offices in London, Paris and New York, and a global community of over 200,000+ brands. Over the next 12 months, we'll be expanding to new cities.

How does it all work? Say we're a brand who wants to rent a space… what are the next steps?

We want to make it as simple as booking a hotel room. Before, if you wanted to rent a shop, it would take you on average three-to-six months. You'd be expected to commit to that space for a minimum of five years and have the rent upfront, which could be several million. Appear Here makes those same spaces available to book simply online, for whatever duration you need.

We've invested in creating standardised legals, online payments and have a dedicated service team with a personal concierge to guide you through the process - we believe the people who are making their ideas happen deserve the same level of service as in a five-star hotel.

What brands/ prominent people are using/ have used Appear Here?

We've launched stores for over 70 per cent of the biggest luxury brands, including the likes of Chanel, Tommy Hilfiger and Marc Jacobs. We also had hundreds of celebrities launch stores with us including Kanye West, Gwyneth Paltrow, Stormzy, Jamie XX and Michele Obama, as well as leading brands such as Apple, Supreme, Nike, Netflix and Google.

Often the best and most creative stores come from the artists on our platform who reimagine what retail can be. A guy in New York installed a grand piano in a 5,000sq ft space and played Bach solidly every day for a month!

It completely depends on your audience. The best neighbourhoods are ones such as Hackney or Peckham which have an identity, and are filled with independents who take pride in their craft.

Some of our most popular areas on Appear Here are SoHo, Tribeca and the Lower East Side. Red Hook is also one to watch; it's become a real destination on the weekends.

My favourite ideas are the ones that have the power to shape our world for the better. We had a bookshop called Knights Of in Brixton that wanted to tackle the fact that only 1 per cent of characters in children's books are from ethnic minorities. It smashed its crowdfunding goal and now has a permanent store.

We also worked with a Syrian refugee, Imad Alarnab. In Syria his successful restaurant business had been destroyed by the war. Our team rebuilt it in London. We found a space on Columbia Road and called it Imad's Syrian Kitchen. When we put the tickets live we were terrified no one would come, but they sold out within 24 hours. Last year Imad was named one of Evening Standard's most influential Londoners for changing the perception of what it means to be a refugee. It shows just how powerful an idea can be.

You're active in Paris, London and New York. What are your favourite spots to eat/ drink/ shop/ stay in each city?

The best place to stay in New York is The Bowery. It's my second home. I love 12 Chairs Café, an Israeli restaurant, and Lucien, a French eatery great for a fun dinner before going out. To drink, there's nothing better than sitting outside Sant Ambroeus in SoHo.

I always try and stay at the Grand Pigalle Hotel, in its top-floor room. For cocktails, Le Syndicat, or Silencio - the only night club I ever go to. For lunch, Marcello does the best Italian; for dinner, Daroco or, for a more casual meal, Carbon in the Marais.

I don't need hotels; my home is in East London. I eat at my local, Bright, in Hackney - it's one of the best restaurants in London right now - or in the courtyard of Luca. For a classic British Sunday roast, I love The Hunter S or The Empress. Depending your vibe, for drinks I would go to either Three Sheets in Dalston or Chiltern Firehouse.

Aforementioned cities aside, what are some of your other favourite cities and why?

It's not a city, but the north of Ibiza is a really special place for me. I've had so many major moments on that island; it's my lucky place. I love LA right now, too. In the last twelve months it's been through a lot of changes; the creative energy is infectious.

What is the allure of the pop-up shop?

Pop-ups give brands the opportunity to connect to a moment but move on before the crowd gets bored. In an era defined not by what we buy but what we experience, the pop-up is an incredibly powerful platform. Those who experience them have the kudos of being able to say: "I was there, weren't you?"

How has the high street changed, and how might it continue to change?

The high street needs to go back to the birthplace of retail: Agoras in Ancient Greece. Agoras literally translates as "gathering place"; people came from around the world to sell their wares and share ideas. Somewhere along the way, the high street became too focused on selling. Retailers must accept that the high street cannot compete with the convenience of online, and instead focus on what online cannot do so well: bringing people together.

There seems to be a shift back towards brick-and-mortar stores of late. Why?

A tagline of yours reads: "as easy as booking a hotel room". With that in mind, what hotels to you book into again and again?

There are four hotels I love and would book again and again: The Bowery Hotel in New York, Maçakizi in Bodrum, Hacienda de San Rafael in Seville and Los Enamorados, Ibiza.

What makes a good hotel?

A quiet room and a lively front of house. When you walk in they treat you like a long-lost friend. My favourite hotels are all independent. They're run by people who are obsessed with detail; extra touches make them a home away from home.

I am currently on lasts pages of Who is Michael Ovitz? by Michael Ovitz. My next book is Let My People Go Surfing by Yvon Chouinard, founder of Patagonia.

I'm that person who always leaves it to the last minute to catch my flight. A great airport to me is the fastest to get through, with the least amount of walking. To improve, I think there needs to be better shops. Most airports are like a giant advert of bling - or a sea of tat.

Travel is such an inspirational and fulfilling experience. It baffles me that the start and end of every journey are still so depressing. Airports need to bring more meaningful moments inside the terminal.

I only ever travel with hand luggage. Last year I clocked up more than 40 fights so I can't deal with waiting for the bag after landing or the anxiety of losing it. I always pack pyjamas, trunks and a pair of trainers, as well as an iPad with the latest movies or series downloaded.

As I travel so much, the immune system can take a bit of a hammering. I always have a large bag of vitamins with me, which also gives me half a chance of dealing with jet lag.